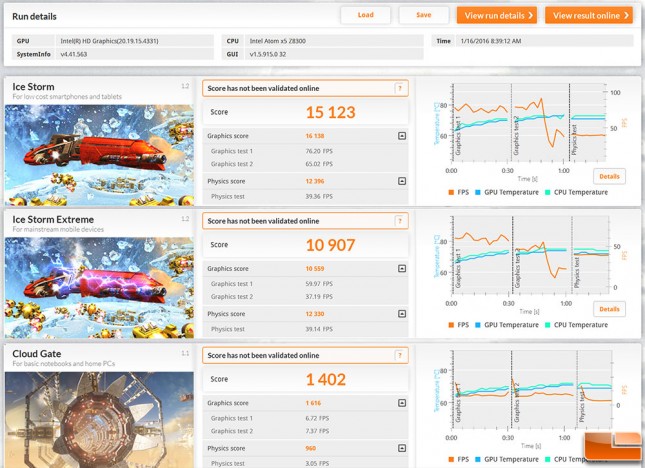 In 3DMark Ice Storm the new Intel Cherry Trail powered Compute Stick scored a rather impressive 15,123 points and was rated at 76.2 FPS on Graphics Test 1. The overall score in 3DMark Ice Storm is up by 65%, so there is a huge performance gain to be had from the new Compute Stick thanks to the boost improved GPU performance. The original Intel Compute Stick scored 9,183 points overall in the same benchmark test and was rated at 41.3 FPS in Graphics Test 1 to give you an idea of the hard numbers. The Physics test went from 28.9 FPS to 39.4 FPS, so even on the CPU side of things there are nice gains seen on the new SoC. Since the Intel Atom x5-Z8300 Quad-Core Processor did so well in the standard Ice Storm benchmark test we also ran Ice Storm Extreme and Cloud Gate. The new Intel Compute Stick STK1AW32SC scores 10,907 in Ice Storm Extreme and 1,402 in Cloud Gate. 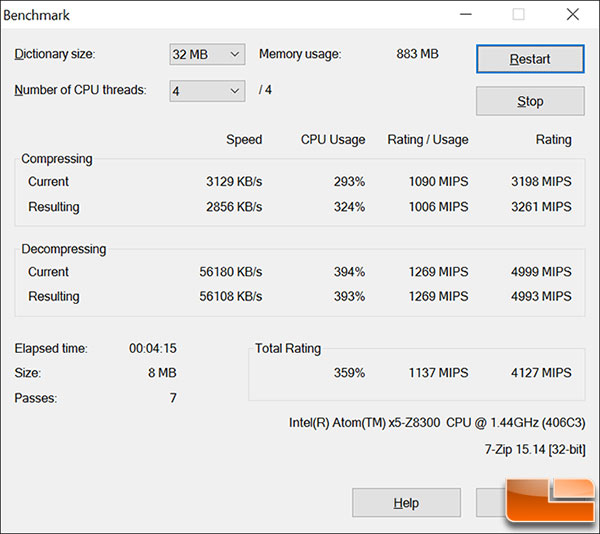 The benchmark built-in 7-zip showed that Intel ‘Cherry Trail’ Compute Stick had a total MIPS rating of 4,172 versus a score of 3,479 on the original version. 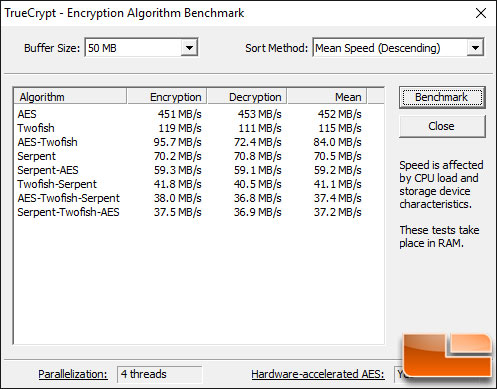 In TrueCrypt 7.1a the Intel PPSTK1AW32SC had a mean score of 452 MB/s in the AES benchmark. The Intel Atom x5-Z8300 Cherry Trail processor has AES-NI support, so it has decent performance for a processor of this power level. 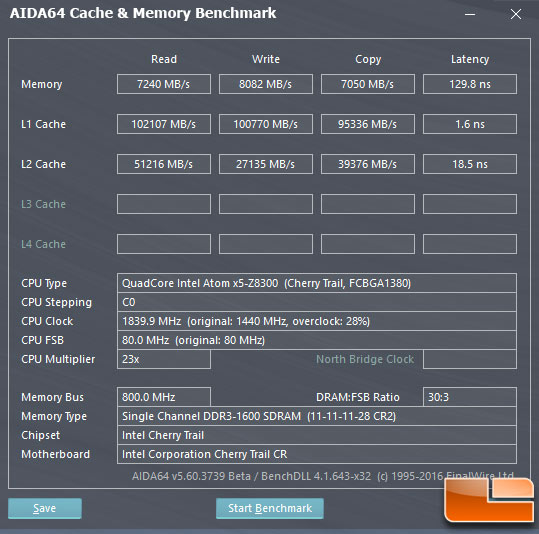 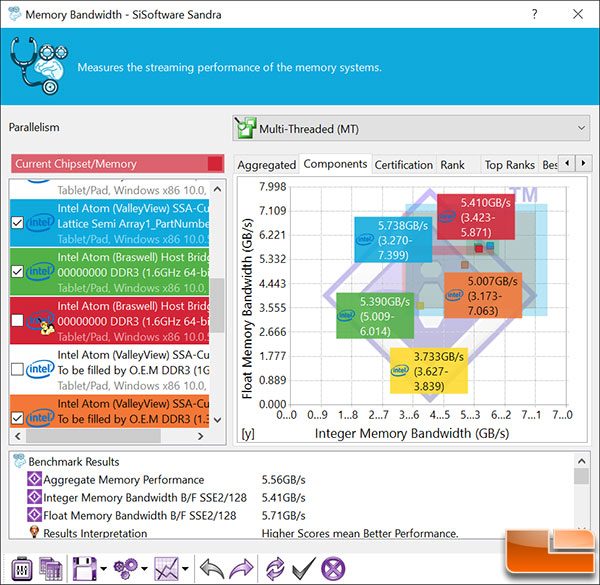 A quick look at the memory performance showed we are getting 5.56 GB/s of bandwidth on the 2GB single channel DDR3L 1600MHz embedded memory solution. This is up from 5 GB/s of memory bandwith on the original Thumb Stick that had slower 1333MHz memory. 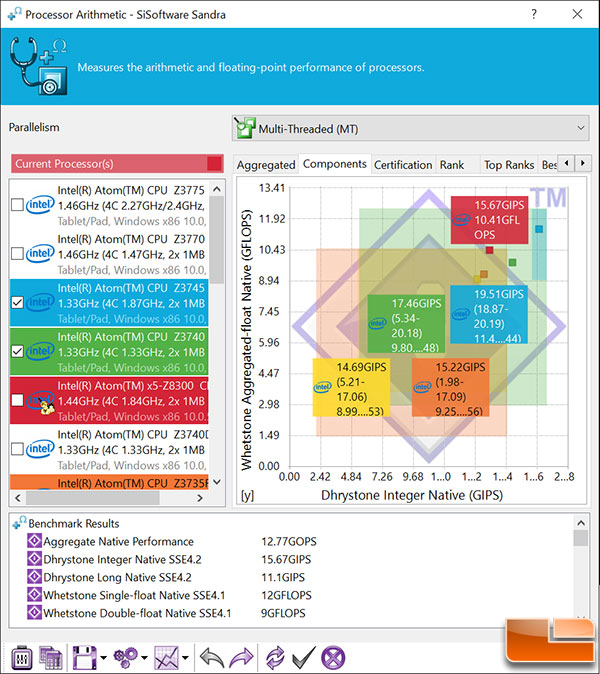 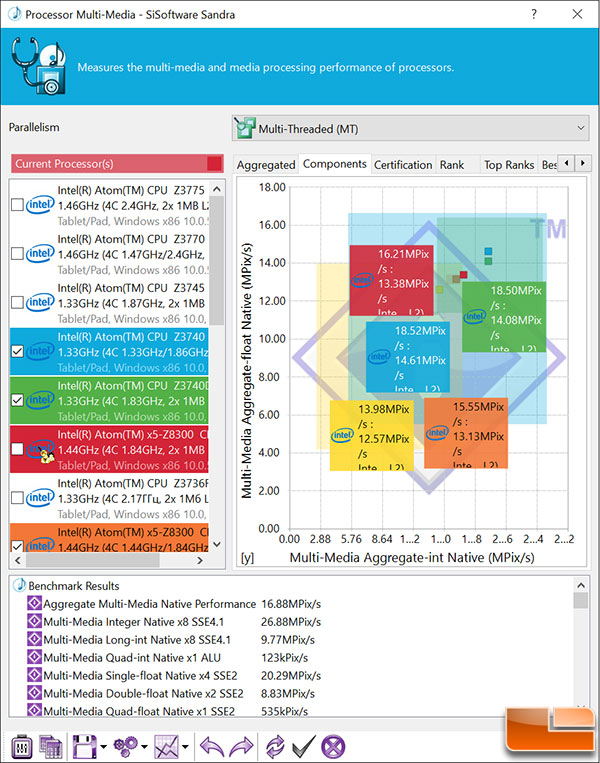 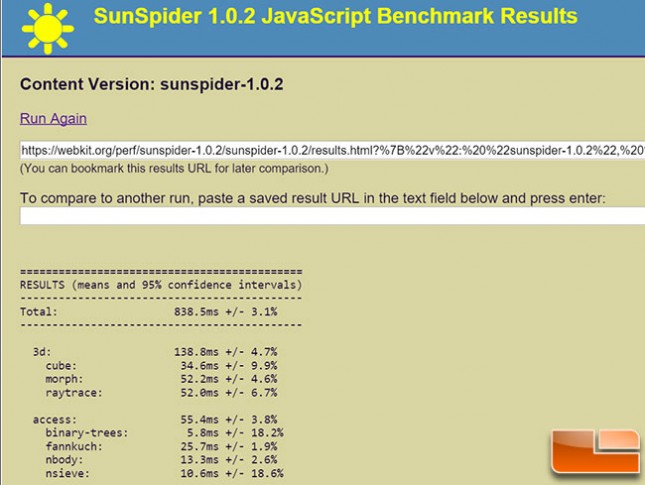 We ran the SunSpider 1.0.2 JavaScript Benchmark on Google Chrome 42 and received a score of 838.5 ms. 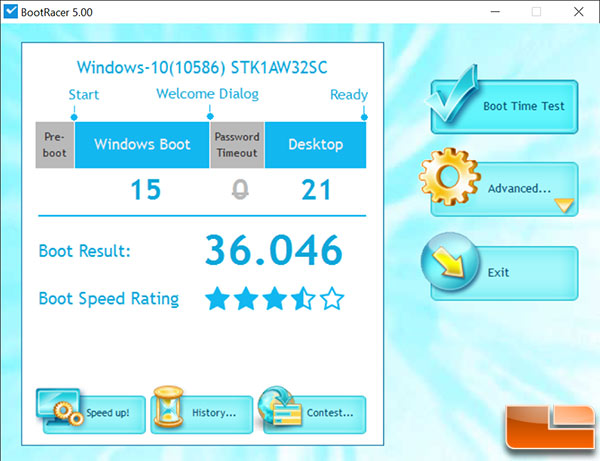 The last performance test that we wanted to run was Bootracer 5.0 to see how fast the system is able to boot Windows 10 Home 32-bit. We found that it takes 15 seconds to get to the welcome dialog and another 21 seconds everything ready on the desktop! This meant our total boot time was right around 36 seconds.

Since the Intel Compute Stick with the Cherry Trail SoC will more than likely be attached to a TV we took a look at a number of video types on the device to see how it would perform as a HTPC as many people might be looking into buying the version without the OS to install Kodi. We took a quick look at DXVA checker and found that the Cherry Trail SoC offers hardware acceleration for MPEG-2, VC1, H.264, HEVC and VP9. When it comes to audio bitstreaming the device supports DTS, Dolby Digital and Dolby Digital Plus. 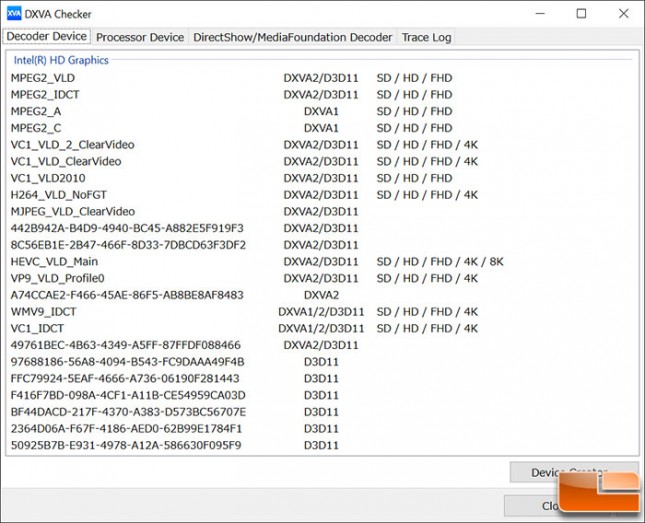 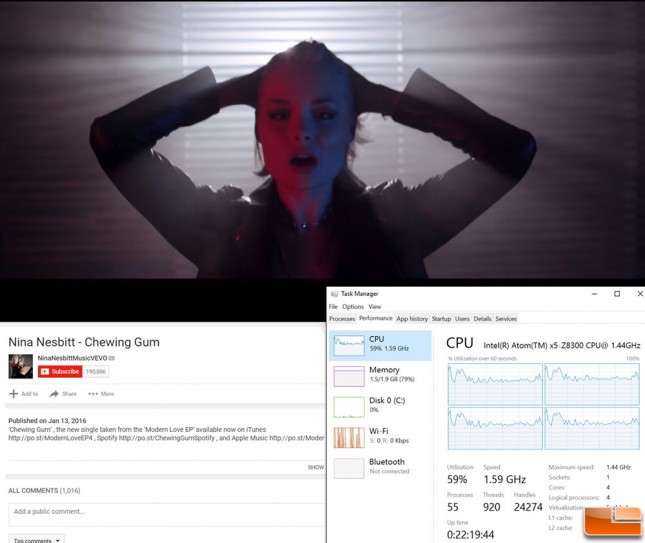 In the screenshot above we played 1080P music video on YouTube and found that we were using up about 60% of the available processing power once the video was cached. It played smooth and our system had no issues with online HD video unless we were multitasking and then you’d drop frames and run into caching issues. 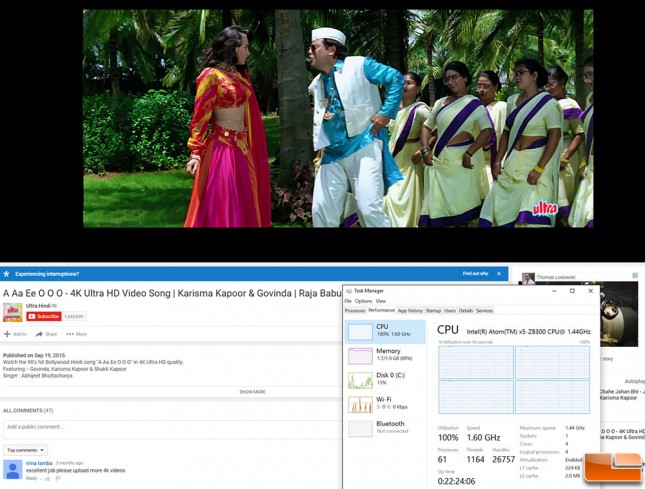 We tried a random 4K music video on YouTube and found that it used 100% of the CPU and it was unplayable due to all the stutters. 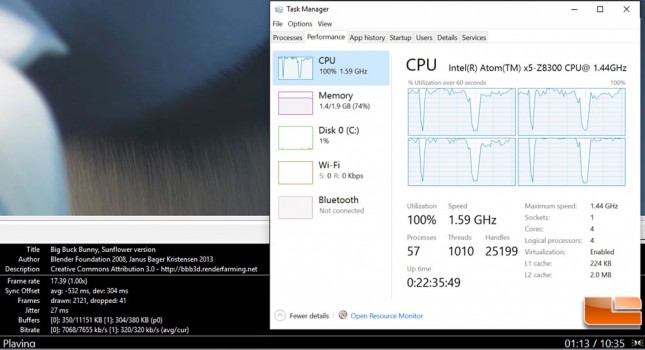 We also downloaded Media Player Classic – Home Cinema along with the Big Buck Bunny, Sunflower 2160p, 30 FPS clip and found that while the Intel Compute Stick STK1AW32SC supports 4K resolutions it is not able to play clips.  In just over 70 seconds of 4K video playback we had 41 dropped frames, an average sync offset of -532ms and were getting just 17.39 FPS on the 30 FPS clip. 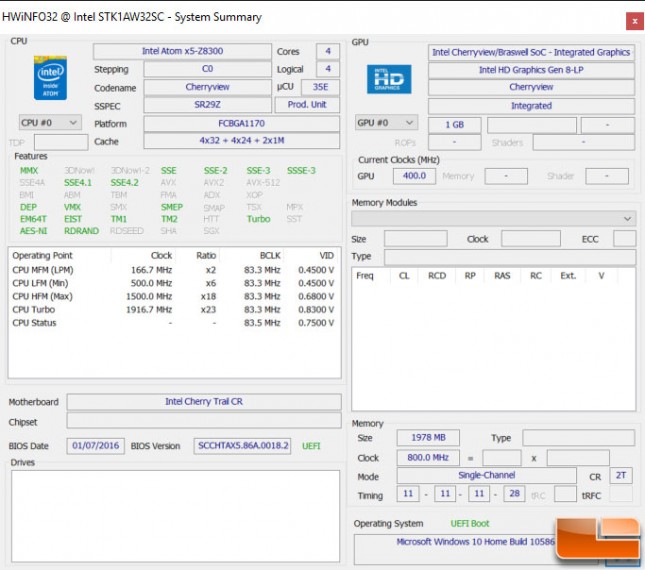 It should be noted that we tested our device with UEFI version 18 that came out on January 7th, 2016 along with Windows 10 Threshold 2 (Build 10586) and Intel HD Graphics Driver 20.19.15.4331. We’ve seen higher scores from this Compute Stick model on other sites, but they were done using UEFI Version 16 and an older version of Windows 10. Our system was fully up to date on January 19th, 2016 when this article was published!