One of the first things I noticed when playing with the Fang gamepad was that it has a solid build quality. I can?t see any of these keys popping off by accident or even getting stuck down the road. Ideazon didn?t lie when they say ?military grade?. The unit has an excellent feel to it.

Another great thing about Fang is its tactile feel. Not only are your main ?movement? keys larger than the rest, the Fang has keys that are dimpled, raised, smooth, and wide. Each key set has a unique feel so that the user doesn?t have to keep looking at their hands to try and figure out where a particular key is located. It will take some practice, but this can be incredibly useful for more complicated games saving a tremendous amount of time and effort finding the right key to press. 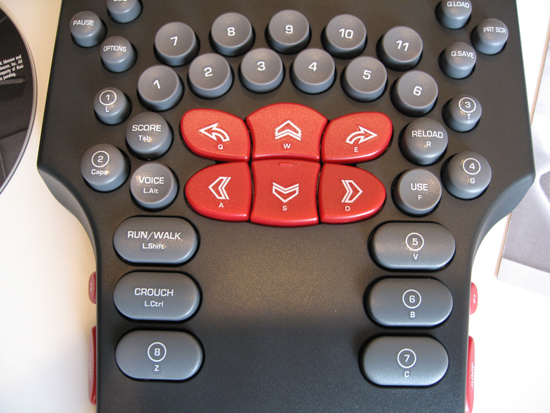 Fang allows for seven simultaneous keystrokes while gaming which make for some pretty interesting moves in Quake and Battlefield 2. A person with not-so-large hands will be quite comfortable using this pad. It is a bit oversized, but all the gaming keys are placed very nicely ? you can tell there was much though put into designing the layout. 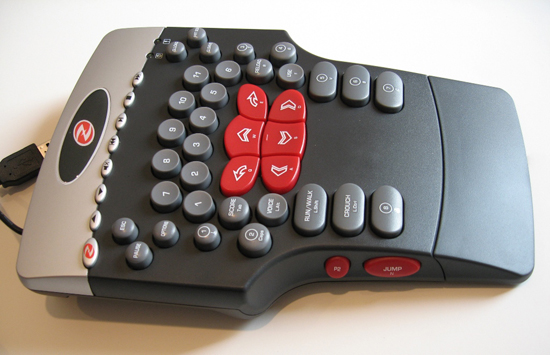 The thing I found most unusual about using Fang playing games was the placement of the ?Jump? key (traditionally the spacebar). It only took me about 4-5 rounds of playing to get very comfortable with its placement though. After a while, it became second nature and I didn?t even think about it. I think this might be a good indication as to the learning curve one can expect when they buy this device.