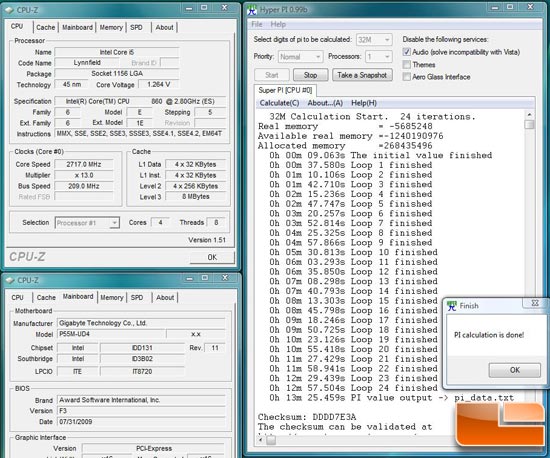 To kick things off I went for a maximum bclk test on the GA-P55M-UD4. The results were not bad all things considered. The BIOS I’m using on this board is from July 31st, 2009 so I’m sure with a newer BIOS and sub-ambient temperatures there will be more overclocking headroom to break into. For right now this was the best I could do, anything above 211MHz bclk caused an instant blue-screen and no tweaking of vQPI, vCORE, PCIe frequency, or multiplier would help. Maybe I’m missing something but 209MHz bclk with an 860 is enough for 4600MHz with the 22x turbo multiplier which I’d say is impressive enough in my book for a mATX motherboard. 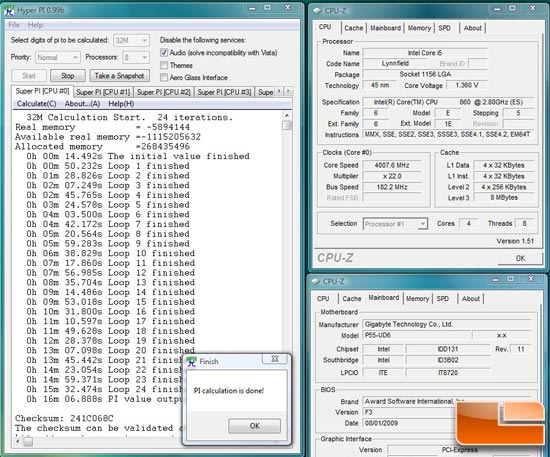 I’m horribly thermally limited due to my shoddy heatsink however this goes to show that the Core i7 860 when coupled with the P55-UD6 could be quite the opponent for the Core i7 920. At 4GHz this chip successfully ran 8 instances of Super Pi 32M achieving 100% load with core temperatures around 84 Celsius. I’m willing to bet with another ~.05v this system would be stable enough to use in a 24/7 scenario. 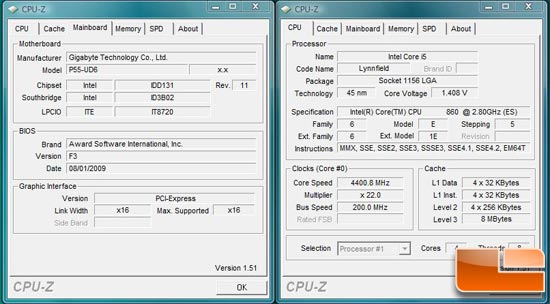 Just for fun I did a short suicide shot at a even 22x200MHz for 4400MHz. There is definitely a lot more to come out of this system, I just need a way to keep this chip cool enough to accomplish the higher clocks.