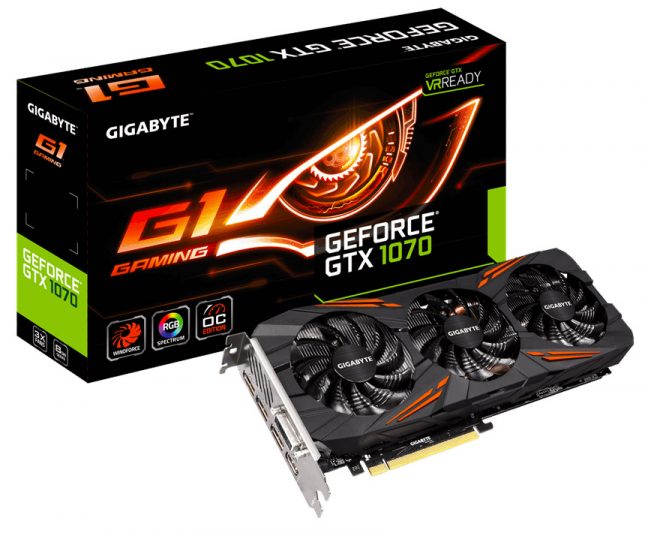 If you ware looking for an NVIDIA GeForce GTX 1070 graphics card to purchase you will quickly find that there are 21 different models widely available from NVIDIA’s board partners in North America. Gigabyte alone has five different models to pick from as you have Gigabyte GeForce GTX 1070 Founders Edition for those that are looking for the NVIDIA reference design and then four custom cards. The custom cards include the Gigabyte GTX 1070 Mini ITX OC model for Small Form Factor (SFF) builders, a GTX 1070 WindForce OC model as the entry level card, a GTX 1070 G1 Gaming aimed at gamers and then the GeForce GTX 1070 Extreme Gaming for those that are concerned with overclocking or what the highest clock speeds possible. Most gamers aren’t going to pay a premium for the Founders Edition by NVIDIA and while we love the Mini ITX form factor the full sized cards are still the most popular cards sold. That leaves three full sized Gigabyte GeForce GTX 1070 models that gamers will be interested in picking.

The model that we’ll be looking at today is the Gigabyte GeForce GTX 1070 G1 Gaming as it is aimed at gamers and at just $429 it costs less than the Founders Edition model and looks to have some great features.

The card that we are looking at today is the Gigabyte GTX 1070 G1 Gaming and they styling of the card shouldn’t come as a shock to anyone. Gigabyte has stuck with a black PCB, flat black fan shroud with some orange accents that form an ‘X’ and black fan blades. Most gamers are happy with black and it doesn’t appear that the video card manufacturers are wanting to stray away from that color much these days.

The WindForce 3x GPU cooler has three 11-blade 90mm dust-proof cooling fans (Power Logic PLD08010S12H) that are optimized for silent airflow. Gigabyte calles these 3D Active fans and claim that the raised triangle shaped edges help increase the airflow by up to 23% over a traditional smooth fan blade surface. The fans help dissipate the heat from two aluminum finned cooling arrays that are interwoven with two large copper composite heatpipes that make direct contact with the GPU. The design looks to be well done and the GPU cooler does use a thermal pad that makes contact with the MOSFETs to ensure the PWM components are kept at safe temperatures to ensure product longevity. Gigabyte is using a 6+2 power phase design for those that are concerned about having stable voltage output. 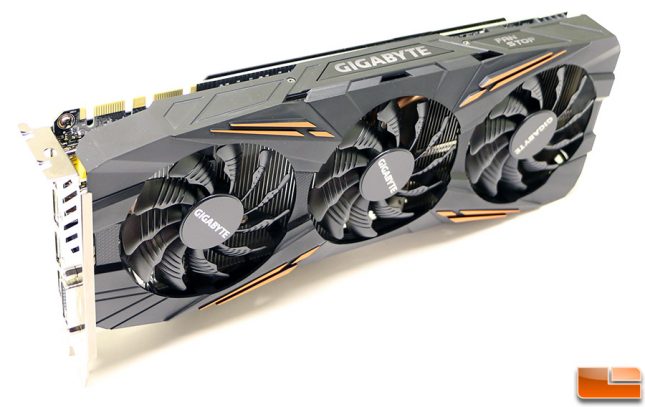 The Gigabyte GeForce GTX 1070 G1 Gaming is a fairly large card that measures in at 280mm x 114mm x 41mm (L x W x H), so at 11-inches in length you might want to make sure it fits in your chassis if you have a mid-tower or some other smaller chassis. Along the top edge of the card the Gigabyte logo and the words ‘Fan Stop’ feature 16.8M color customizable RGB lighting with some neat lighting effects that can be managed through the Gigabyte Xtreme Engine Utility.

Like many of the other NVIDIA GeForce GTX 1070 cards on the market, the Gigabyte GTX 1070 G1 Gaming features a semi-passive fan design. This means the fans seldom run when the card is running in 2D mode or even when doing some light 3D gaming, so it has true 0dB performance. Once the card passes a certain temperature threshold the fans will kick on to help keep the GPU cool. 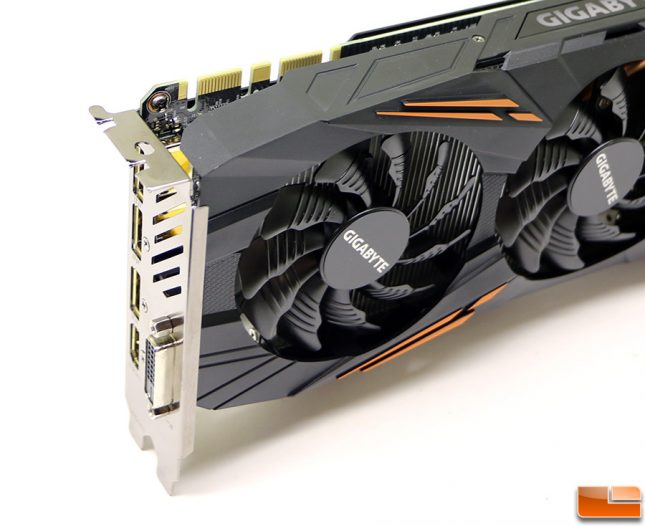 Along the top edge of the mounting bracket you’ll find the NVIDIA SLI interconnect for those that wanted to run two of these cards together for improved gaming performance. The NVIDIA GeForce GTX 1060 series doesn’t have SLI multi-GPU support, so the GeForce GTX 1070 is the lowest priced Pascal GPU powered card to support SLI.

Gigabyte claims that they used their ‘GPU Gauntlet Sorting’ system for the GeForce GTX 1070 G1 Gaming to ensure higher overclocking than the GeForce GTX WindForce OC models. Gigabyte does have a dual-bios solution in-place on this card, but it’s an automated process where if one BIOS fails the card rolls over to the second one without you having to do anything. 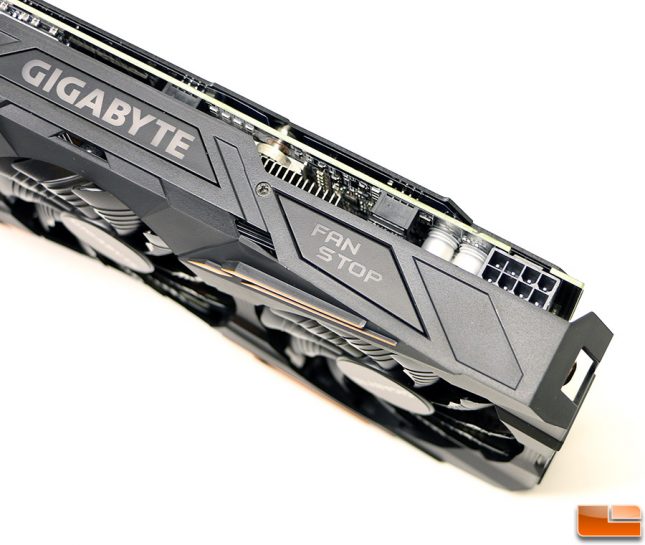 On the other end of the top edge of the GTX 1070 G1 Gaming you’ll find the one rear-facing 8-pin PCIe external power connector. Gigabyte recommends a 500W or greater power supply for your gaming system with this model.

The Gigabyte GeForce GTX 1070 G1 Gaming comes with a full coverage black metal back plate to help protect the components on the back of the card and to add rigidity to the card to keep it from looking saggy on the far side of the PCIe x16 slot interface. 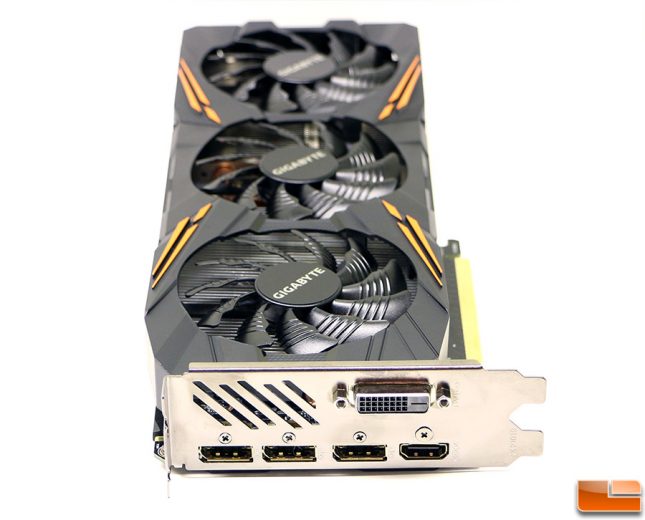 Gigabyte went with three DisplayPort 1.4 outputs as well as single HDMI 2.0b and Dual-Link DVI-I when it comes to video outputs. The HDMI 2.0 port does support 4K (up to 4096×2160) @ 60Hz! Gigabyte does not include any DVI to VGA adapters or SLI bridges in the accessory bundle with this card, so just a friendly heads up there. We aren’t going to bother showing you the box or retail bundle as you just get a quick start guide and a driver disc (who really loads drivers from a CD-ROM these days anyway?).

To get the best user experience with the Gigabyte GeForce GTX 1070 G1 Gaming you’ll need to download a utility called Xtreme Gaming. This software allows you to control all your Gigabyte gaming devices (video cards, mice, keyboard etc.) and it also allows you to overclock the graphics card. The Gigabyte GeForce GTX 1070 G1 Gaming comes out of the box in gaming mode, so if you want to run the higher factory overclock speeds you’ll need to set it to OC mode. You can also choose to manually overclock the card and this utility allows you to adjust clock speeds, voltages, fan speeds, power limits and the temperature limit. You can also adjust the fan speed curve along with the LED RGB lighting color, styles and brightness. This application even allows you to log the data from the video card, so it is a very robust utility that comes in handy. We left the card at the default ‘Gaming’ mode setting as that is how it comes out of the box and we figured most people will leave it like that especially if they don’t install this optional utility.