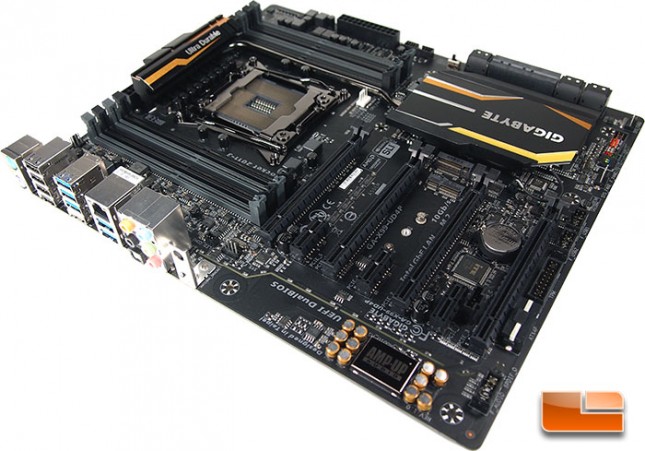 The GIGABYTE X99-UD4P really is a sharp looking board. The all black and gold combination that GIGABYTE is using on their boards right now really looks sharp. Though looks certainly aren’t everything, if the X99-UD4P doesn’t have the performance needed to get the job done in the end, then nothing else matters. Overall the layout of the X99-UD4P is very solid and everything flows well. Let’s take a bit of a closer look shall we? 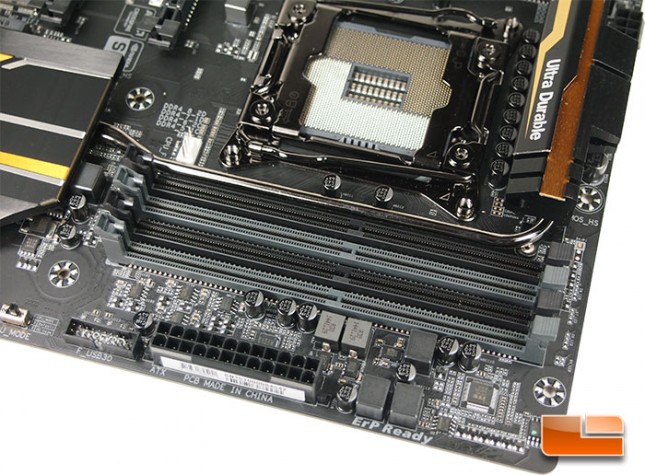 The GIGABYTE X99-UD4P features all the latest and greatest features that come with the Intel X99 chipset. At the forefront of those features is the quad channel DDR4 memory support. Above you can see the first four of the eight total DDR4 DIMM slots. The other four are on the backside of the LGA 2011-3 socket, there’s a picture of those later on. Along the edge of the X99-UD4P there is the standard 24pin ATX power plug and an internal SuperSpeed USB 3.0 header. 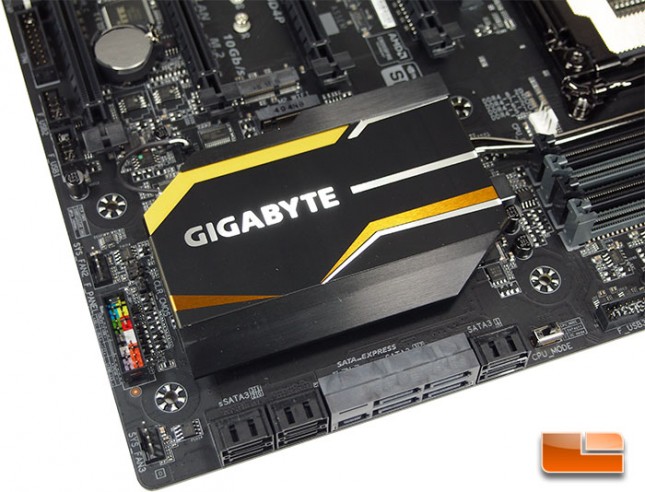 Spinning the GIGABYTE X99-UD4P around, the most visually appealing portion of this area is definitely the heat sink over the chipset. To the right of the SATA ports is a switch labeled with CPU_MODE. The CPU Mode switch allows overclockers to bounce between the default mode and the overclocking modes. The X99-UD4P packs a total of 10 SATA III 6Gbps ports on the board, two of which are meant to be used with the SATA Express. Moving up along the left edge of the X99-UD4P, there is a 4pin chassis fan, front panel header, a second 4pin chassis fan header, and finally up along the top of that edge is a pair of internal USB 2.0 headers and the T.P.M. (Trusted Platform Module) header. 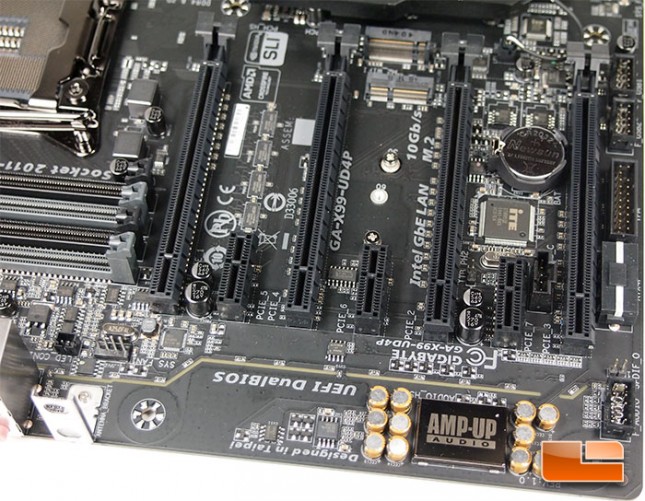 The GIGABYTE X99-UD4P has a pretty decent expansion setup. The first two PCIe x16 (PCIE_1 and PCIE_2) slots are both running at x16 speeds, the second pair (PCIE_3 and PCIE_4) are running at x8 speeds. The PCIE_4 slot does share bandwidth with the first PCIE x16 slot, so if the X99-UD4P is running four cards the first slot will be running at x8 as well. In addition to the four PCIe x16 slots, there is also three PCIe x1 expansion slots. Tucked between the 2nd and 3rd PCIe x16 slots is couple of M.2 slots. One of them is a M.2 Socket 1 (M2_WIFI) which is meant for a wireless communication module. The second is a M.2 PCIe socket 3 M Key which is meant for a M.2 SSD. The Socket 3 M.2 will support type 2242, 2260 and 2280 cards. In front of the expansion slots, the audio is nearly completely separated from the rest of the board. This helps to eliminate any of the electrical interference from the rest of the X99-UD4P components. Tucked underneath the GIGABYTE AMP-UP audio shield, is the latest and greatest audio codec from Realtek, the Realtek ALC1150. The Realtek ALC1150 is a high-definition audio codec that will provide 2 channel, 4 channel, 5.1 channel, and even 7.1 channel audio for your listening pleasure. 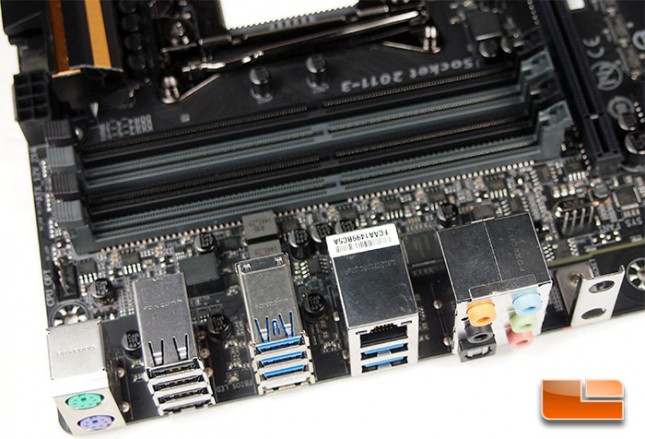 Taking a look at the final corner of the GIGABYTE X99-UDP4, most notably there is the final four DDR4 DIMM slots that support quad-channel memory. Near the two lower corners of the DIMMs there is a 4pin fan header at each of the corners.

The GIGABYTE X99-UD4P has no shortage of I/O ports on the I/O panel. GIGABYTE has packed in a total of 10 USB ports, six of which are SuperSpeed USB 3.0 and the remaining four are USB 2.0. GIGABYTE has paired the SuperSpeed USB 3.0 that is native to the Intel X99 chipset with a Renesas uPD720210 USB 3.0 hub to increase the number of USB 3.0 ports on the back panel. There is also a pair of PS2 ports for a Keyboard and Mouse, as well as 5 3.5mm audio jacks, optical SPDIF out and a bracket for a pair of WiFi Antennas.