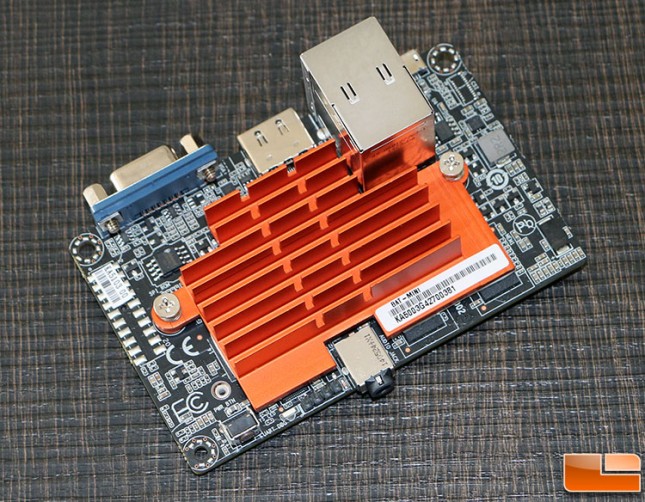 The ECS LIVA uses the BAT-MINI motherboard, which is only available with the LIVA kit for the time being. Later this year, think October, you’ll be able to buy just the board if you’d like. The board is very small! ECS went with a passive cooling solution, which means this system is silent thanks to the modest orange heatsink that ECS designed for the LIVA. The heatsink is attached with a pair of screws and there is thermal interface material between the SoC and heatsink to help transfer the heat away from processor. 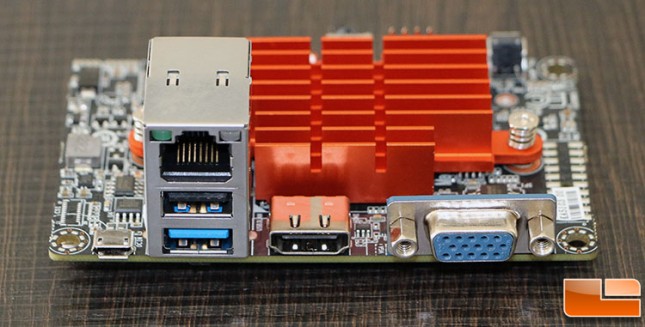 On the rear I/O panel of the ECS BAT-MINI you’ll find HDMI and D-SUB (VGA) when it comes to video outputs. Most of our readers are more than likely cringing at the sight of a VGA header, but ECS wanted to ensure they were able to fulfill the needs of emerging markets where VGA is still a popular connector being used and ECS also noted that the DVI connector wouldn’t exactly fit with the layout design they came up with.

Next up we have the Realtek RTL8168/8111 PCI-E Gigabit Ethernet port that is connected to the Intel Celeron N2807 SoC with the one of the motherboards four PCI Express Gen 2 lanes. Below that you’ll find the boards only USB 2.0 and 3.0 ports. The Intel SoC is capable of supporting four USB 2.0 and one USB 3.0 headers, so ECS has the ability to add more USB support, but made the decision not to. We have a number of wide USB 3.0 Flash drives and we can safely say that they won’t in the USB 3.0 port on the ECS LIVA with the power cable and HDMI cable hooked up. Other tiny PC makers often use two USB ports on the back and then a USB port on the front of the board to remedy this issue. It also leaves a port open as most people have a USB keyboard and mouse and will use both of these USB headers.

If you look closely you’ll see that ECS went with a micro-USB power connector to power this board. That caught us off guard, but they did that to save space, the connector is cost effective to all the millions of phones and tablets that use them and you can run the ECS LIVA from a portable battery power pack. Yes, you read that right. ECS designed the LIVA to run off a portable battery pack and it actually works. ECS rates the LIVA as having 4 Watts of power consumption and at most 14.9 Watts when both the CPU and GPU are being heavily used. We aren’t sure why you’d want to run this off a portable battery, but you can if you ever had the desire to do so. 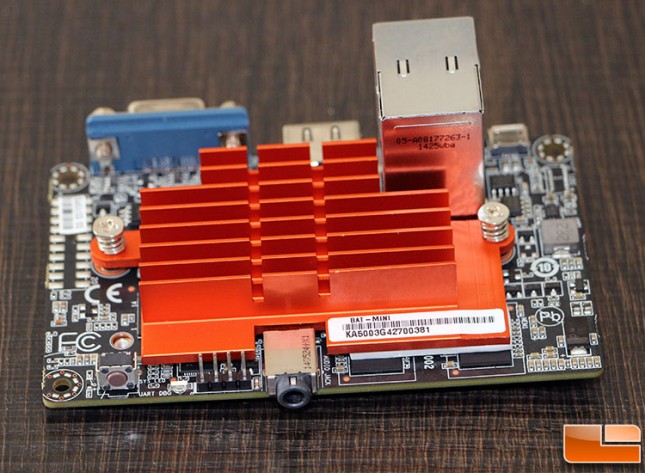 On the other side of the board you’ll find the power button, power LED, a 4-pin debug header (Internal use only) and finally a 3.5mm combo audio header that supports both Stereo Out and MIC IN functionality, similar to the jack found on many tablets and smartphones. One of the usage scenarios we see for the ECS LIVA is a home theater PC (HTPC), but there is no RF or IR receiver/blaster to be had on this board. 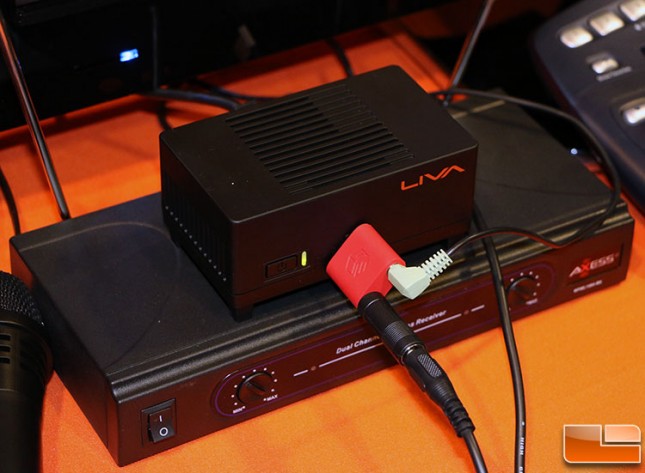 The bad news is that ECS does not include the splitter/adapter, so you’ll need to go out and by a $5 adapter like the one shown above that ECS was using on a LIVA demo system that we were shown. We suggested to ECS that they consider including this adapter in the future to improve the out of box functionality of the LIVA as many consumers want to have speakers plugged in and will need to use a microphone for Skype or for gaming. Sure, this isn’t a gaming box by any means, but you can still play some lite indie game titles and non-graphics intensive game titles. 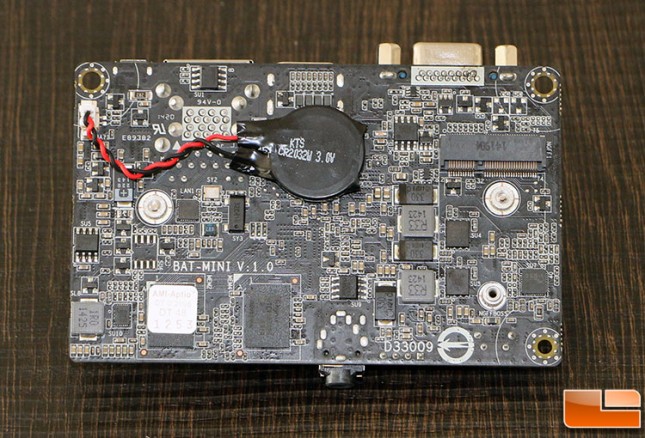 On the back of the board you can see the system battery and the M.2 (NGFF) socket that is used for the wireless card. The M.2 slot is wired to the Secure Digital Input Output (SDIO) interface instead of PCIe, so this slot can only be used for non-storage purposes. There aren’t too many Wi-Fi modules using the M.2 interface, so if you wanted to switch to something other than the included 802.11b/g/n card it will be tough. We found that Intel makes a M.2 wireless card called the Intel 7260.NGWWB Wireless Adapter that supports 802.11ac (867Mbps) although ECS couldn’t confirm to us that this specific card would be able to work on the ECS BAT-MINI. 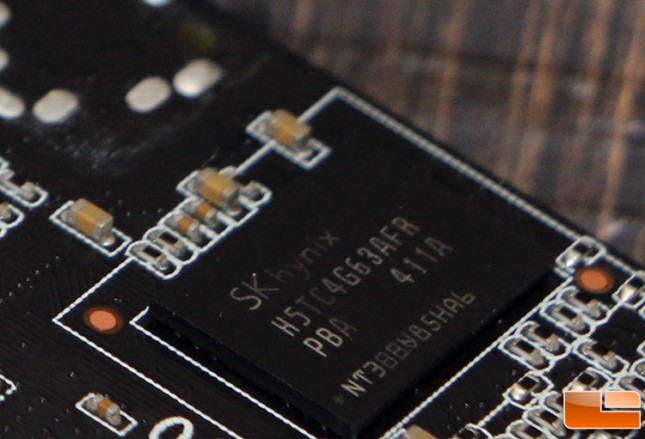 When it comes to the Wi-Fi module, ECS includes the AzureWave AW-NB136NF 802.11b/g/n M.2 solution. The AW-NB136NF is also Bluetooth 4.0 compliant. This card is powered by the Broadcom BCM43142 combo chip, if you are curious what SoC is powering this module. How will wireless performance be with this specific solution? You are looking at a dual-band (2.4 GHz and 5 GHz network) single stream solution, so we could see up to 150 Mbps in our testing.

Let’s build this system and move along to testing!