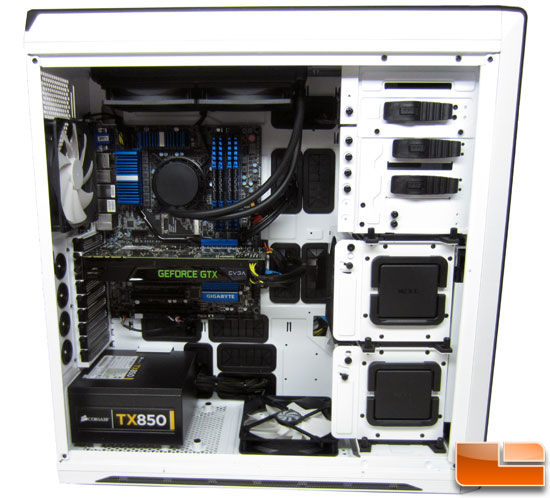 Opening up the CyberPowerPC Zeus Thunder 2500 SE was simple as we just needed to remove three thumbscrews and then lift off the side panel.  With the door removed we are face-to-face with a very clean looking interior with impressive cable management. Keep in mind the NZXT Switch 810 is a full tower case, so this PC assembly looks clean in part to how large the case is. CyberPowerPC did a great job routing the cables and the inside of the case looks nice s a result. Not only does this look good, but having the cables routed like this, means better airflow throughout the case. 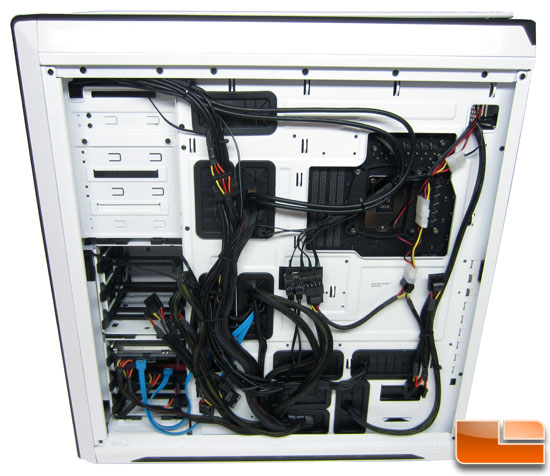 Just because the wiring looks good in the front, it doesn’t mean that behind the motherboard tray thing will look pretty. Removing the right side panel we found that the wiring was nicely routed and bundled together, despite having just 20mm of space behind the motherboard tray. The Corsair TX850 V2 Power Supply is not modular, so this is a nice job. 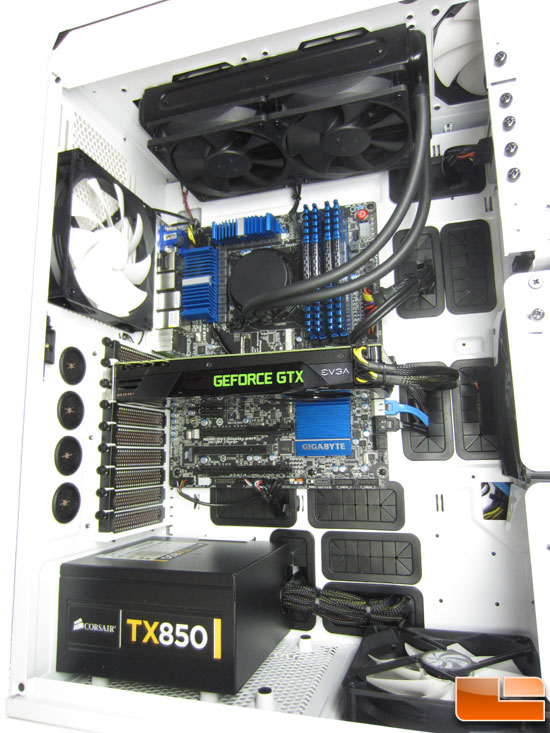 CyberPower went with the Gigabyte GA-Z77X-UD5H motherboard for our Zeus Thunder 2500 SE. This motherboard choice is very solid as we have reviewed this board in the past. The Intel Core i7-3770K processor is kept cool by an Asetek 570LX Liquid Cooling system w/ 240MM Radiator and Dual Fans. With the two fans on the radiator and the three case fans above it, this makes a nice push/pull config for the water cooler. 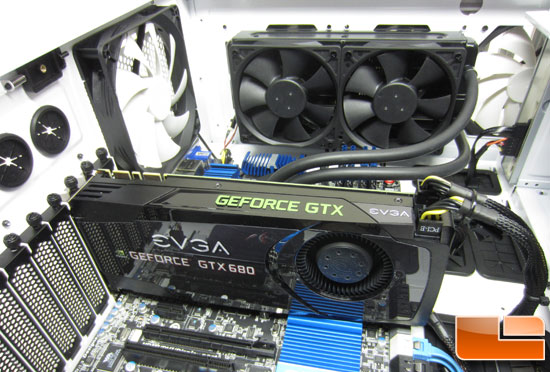 The video card is an EVGA branded NVIDIA GeForce GTX 680 2GB DDR5 that is a Superclocked model. This card can boost up to 1124MHz on the 1536 CUDA cores and is the fastest single-GPU graphics card that NVIDIA makes right now. 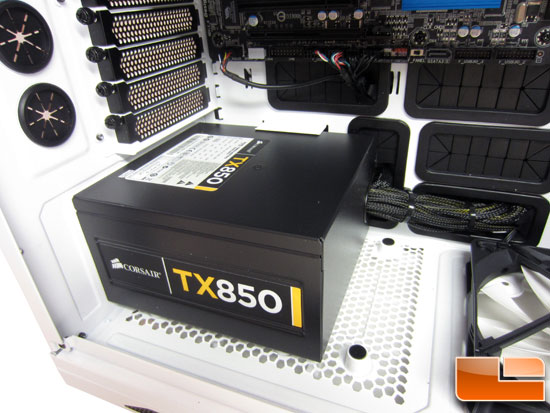 The system is powered by a Corsair TX850 V2 power supply. This power supply is 80 PLUS Bronze certified and is ATX 12V v2.31 and EPS 2.92 compliant. This power supply also can easily run NVIDIA or AMD multi-graphics configurations, so if you wanted to run CrossFireX or SLI in the future you hould be good. This power has single +12V rail that is rated at 60 Amps!

The hard drive cage is located right behind the 140mm case fan that is located the front of the case, which is nice as it has some airflow around it. You want to keep your hard drive as cool as possible as heat is your enemy on critical components like your storage drive. CyberPowerPC went with a 1TB Seagate Barracuda hard drive with part number ST1000DM003 for storage and a Corsair Force GT 120GB SSD for the primary drive. There is plenty of room to add many more drives, so future storage needs shouldn’t be an issue.

Now that we know what is inside the CyberPowerPC Zeus Thunder 2500 SE and how it was built we can see how it performs in the benchmarks!