To evaluate the Corsair VX450W power supply, we tested it out in the HTPC that we just built a couple weeks ago for our article on playing HD DVD’s with the ATI Radeon 2600XT graphics cards via a single HDMI cable. This computer features the latest and greatest hardware and is what makes for a great HTPC. 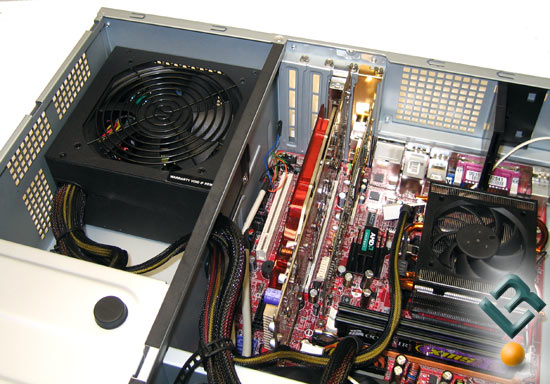 The test system was comprised of our in-house HTPC that is assembled in an Antec Fusion case with a pair of 120mm cooling fans. The MSI K9AGM2 micro-ATX motherboard (AMD 690G chipset) handles the 2.1Ghz AMD Athlon X2 BE-2350 processor and 2GB of Corsair XMS2 PC2-6400C4 memory with ease. The ATI Radeon HD 2600 XT and TV Wonder 650 PCIe handle getting the picture to the screen, while the 750GB Western Digital SATA hard drive makes sure there is enough space to record live TV. The system is topped off with an XBox 360 HD DVD player and Sony DVD-RW optical drive.

To test the power supplies at an idle we ran the system for an hour on the desktop with no screen saver and recorded the voltages with the volt meter. The load testing was done by playing an audio CD with Windows Media Player, using PowerDVD to play an HD DVD, running 32M Super Pi and downloading files off the internet. This gave us a full load on the CPU and partial load on a variety of system components on various power rails. 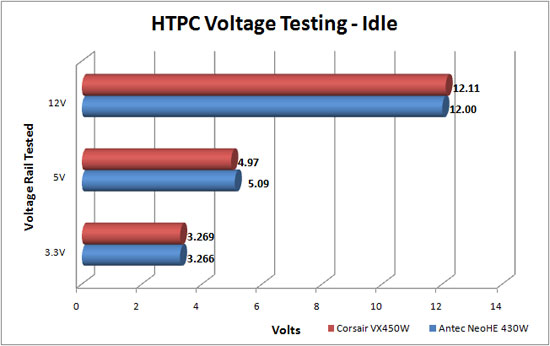 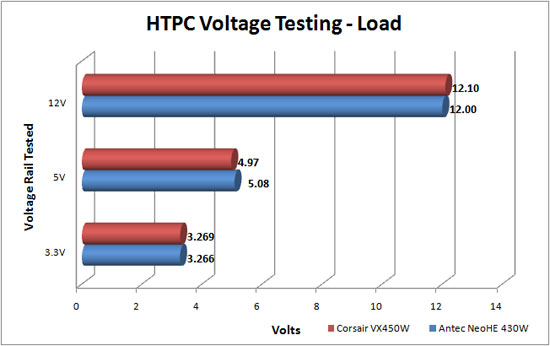 Results:The load results were not significantly different than the idle benchmark results. 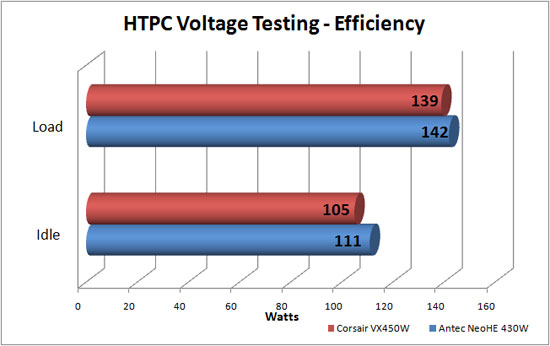 Results: The 2.1Ghz AMD Athlon X2 BE-2350 processor has a TDP of just 45W, so even at full load our test system never did break 150W. This is ideal as we want the least amount of power consumption on our HTPC since it is on at low power states for extended periods of time. The Corsair VX450 consumed less power than the Antec NeoHo430/SU-430.

After doing some research, it was found that the Antec NeoHE and SU-430 (the non-modular version) have the following efficiency ratings at 115V operation:

The Corsair VX450W power supply is rated at a higher efficiency: 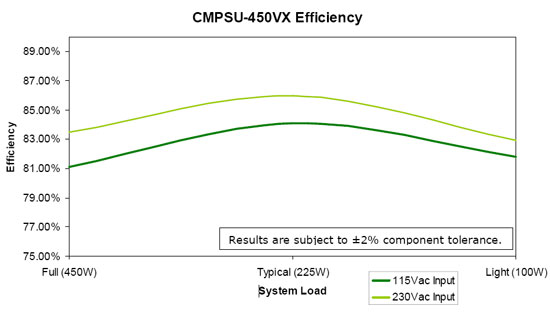 Since our test system would be considered a “light load” it makes sense that the Corsair VX450W power supply would be slightly more efficient as our testing showed.