Since this is the first time we have laid eyes on Corsair’s VX series of power supplies, we thought we’d take a peak inside to see what was going on. Remember that opening up a power supply is dangerous as the components hold electrical charge and by removing the cover it VOIDS the five year warranty that Corsair offers. 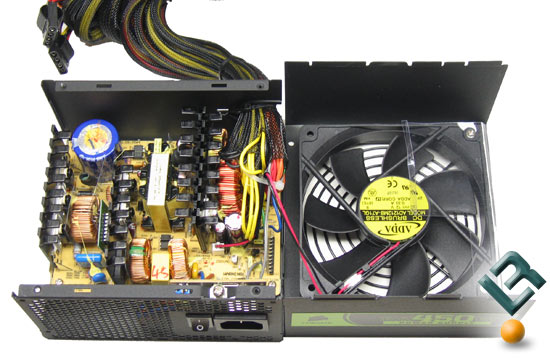 Once the Corsair VX450W was opened up, it brought back memories of the Corsair HX620W that we took a look inside one year ago here. The VX series was found to have the same brand of components as the more expensive HX series, so if history tells us anything it’s that this power supply should be a good one. One thing we noticed is that this power supply didn’t have any adjustable potentiometers inside, so opening one up is pointless for consumers as there nothing inside to ever adjust. 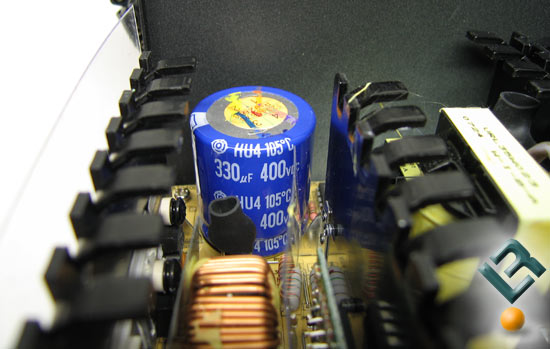 With the cover fully removed off the Corsair VX450W power supply, we found it hard to miss the huge primary capacitor in rear of the unit. The above photo shows the 330uF 400V Hitachi AIC that comes rated at 105C. Typical consumer grade capacitors are rated at 85C, so these go beyond what is standard and are usually considered “industrial grade” components. 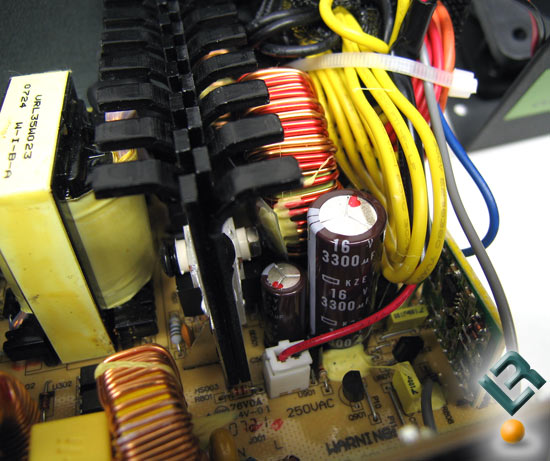 The secondary capacitors were found to be made by Chemi-Con and are KZE series parts. 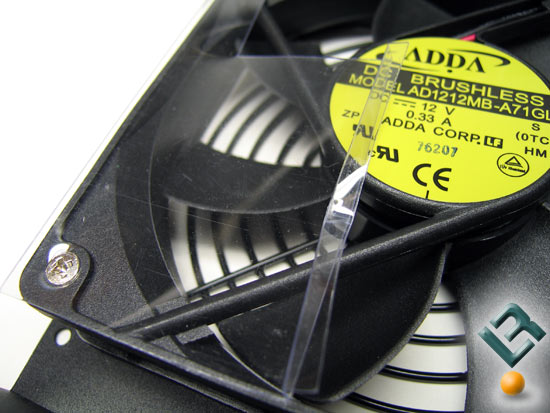 The Corsair VX450W power supply isuses a 120mm Adda (Model AD1212MB-A71GL) exhaust fan. The fan specifications state that this model produces a maximum airflow of 80 CFM at 2050 RPM at 36.6 dBA. With most of today’s enthusiast grade power supplies having 120mm or 140mm fans we found that the Adda 120mm fan lived up to our expectations in terms of cooling and noise.

When looking closely at the picture above, one will notice that ~20% of the fan is covered by a piece of clear plastic that is obviously going to block air flow. Legit Reviews contacted Corsair Memory and asked them about this plastic piece and was given this offical statement in respinde.

The reasoning is that it [the piece of plastic] causes a low pressure point over the rear of the PSU so the air from the front of the fan ducts up and then flows backwards out the rear exhaust holes. Without the plastic the air would be deflected back right at the fan and the exhaust wouldnt be as effective.

That’s it for the inside of the power supply! Let’s move along and take a look at our test systems and try this power supply out.