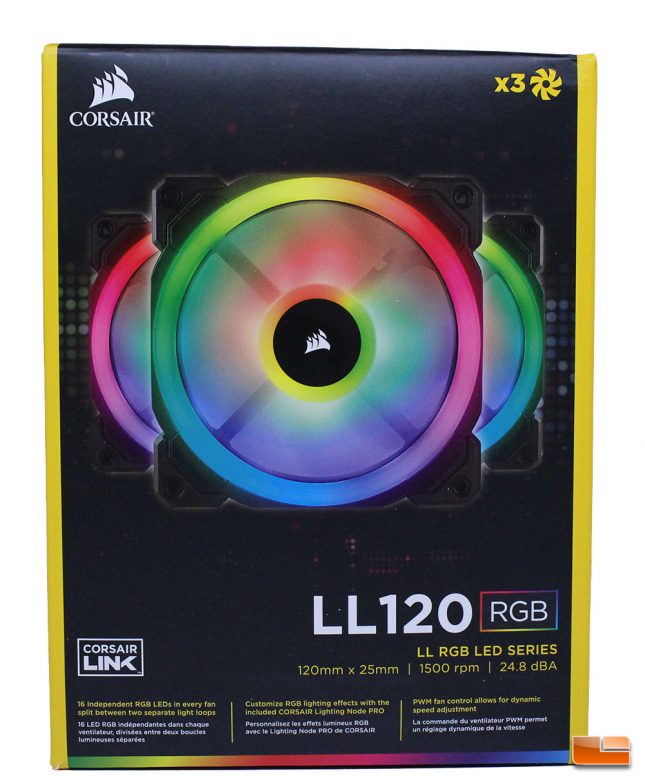 The Corsair LL120 RGB Led Triple Fan Kit ($119.99 USD) ships in a black box with yellow accents lining the sides and a rainbow line across the bottom. The box features a picture of three LL120 fans in action and Corsair branding throughout. Corsair did a great job of showing off the default RGB effect of the LL120 RGB with great detail in a way that should attract the eyes of customers in retail outlets. 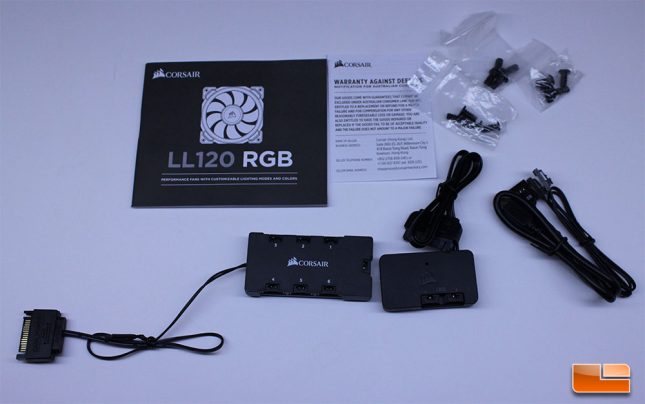 The Corsair RGB Fan LED Hub has six four-pin inputs, allowing it to work with up to six Corsair RGB fans at a time. The Corsair RGB Fan LED Hub is compatible with all of the Corsair RGB fans that require Corsair Link, so you can mix LL, HD and SP series fans on the same hub. This comes in particularly handy for me, since I have some HD140 fans coming in for my radiator and I can easily drop them in and connect them to the hub without having to add any additional hardware to my rig. The 3 pin connector that is focused in the picture above on left connects the fan hub to the Corsair Lighting Node Pro, which is a necessary component that lets all of the fans communicate to the Corsair Link software via USB. 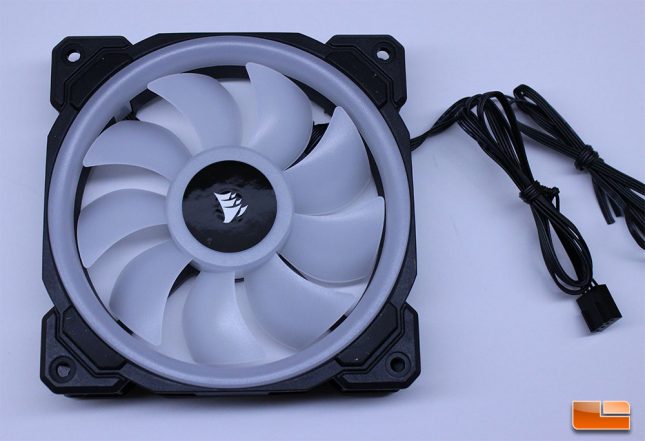 The Corsair LL120 fan has a black frame, with rubberized screw holes and rubber isolation tabs on the four corners to reduce noise. The LL series fan has a frosted blades, which should diffuse the RGB lighting more evenly than glossy plastic would. There is a Corsair sticker on the center blade of the fan and it looks okay, but I think a stamped or silkscreen logo would look better. Thankfully, Corsair put the sticker on straight, so there isn’t any wobble when the fans are running. 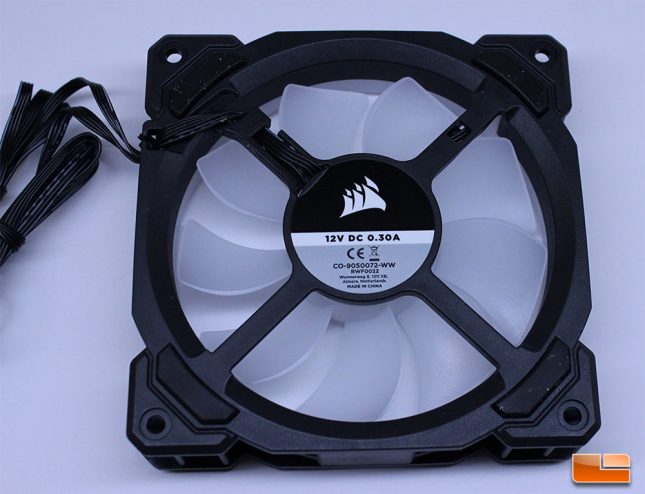 The rear area of the LL120 RGB fan is fairly uneventful, with a Corsair sticker covering the rear of the hub. The same rubber isolation bumpers that are on the front are also on the rear of the LL120. The LED and fan cables run through a channel neatly through the side of the fan. Our sample had the sticker lifted slightly where the cables exited, but it was easy to flatten them and push the sticker back down. Hopefully this isn’t an issue others will see, but it’s easy enough to remedy.

The LL120 fans have two cables coming from them. One is a four-pin PWM fan header that can be installed on your motherboard for direct control. The other cable coming from the LL120 is to be wired directly to the Corsair Fan Hub, which connects to the Lighting Node Pro with a single cable connection. The Lighting Node Pro is able to communicate with each fan on the fan hub individually, as long as they have been installed in serial and no ports were skipped. If you break the chain, say by connecting fans to ports 1,2 and 4 instead of 1,2 and 3, the Lighting effects will not work and the chain will be broken.

Let’s take a look at our installation of the LL120 RGB Fan Triple Pack, next.