We don’t take the time to do reviews as many USB Flash drives as we used to because there are so many of them out there and people usually purchase them based on the price point with no concern about the performance. Newegg for example currently has 15,575 USB Flash drives for sale, with prices starting out at around three bucks shipped. USB thumb drives are also given away by the thousand daily at trade shows around the world and it is a safe bet to assume that most households have one or more drives stuffed in a drawer. It’s tough to do reviews when there are over 15,000 drives available to pick from, but we do take the time to review the super high-end flagship products that are game changers. The new Corsair Flash Voyager GTX USB Flash Drive appears to be pushing the boundaries for what one can expect when it comes to performance from a USB 3.0 Flash Drive, so we figured that it would be worthy of the time it takes to do a review. 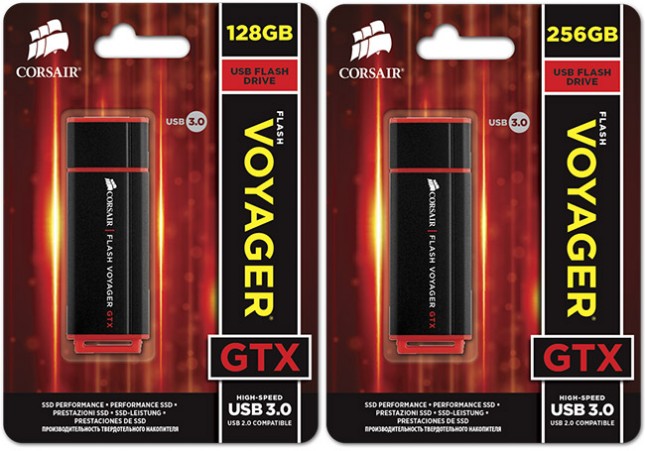 The Corsair Flash Voyager GTX USB 3.0 Flash Drive series consists of pair of drives that are 128GB and 256GB in capacity and run $119.99 and $199.99, respectively. Corsair claims that the Flash Voyager GTX delivers SSD-like performance in a compact thumb drive. Corsair says they are able to do this thanks to the use of a Phison PS3109-S9 SSD controller being used on the Flash Voyager GTX series. Corsair has had good luck with Phison controllers for some time now as we first saw them use one back in 2013 on the Corsair Force LS SSD series. Corsair didn’t want to mention what type or brand of MLC NAND Flash was being used as some of the build components change over time due to availability and pricing. So, what kind of performance can you get from a USB 3.0 Flash Drive that has the Phison S9 controller running the show?

How does up to 450MB/s for sequential read and up to 360MB/s for sequential write speeds sound on benchmarks like ATTO? Corsair puts the same speed ratings on both the 128GB and 256GB capacity drives, but the 128GB drive is said to be just a “tish faster” and just so happens to be the model they sent for us to take a look at. Corsair included some benchmark numbers in a reviewers guide and in some benchmarks like CrystalDiskMark there is very less than a 0.1MB/s speed difference between the two capacities in both read and write tests, but in others there is a rather significant speed difference. 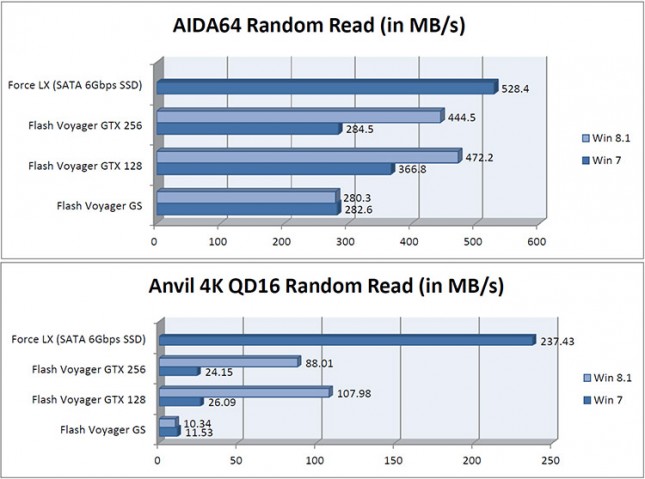 For example in AIDA64 the Random Read test showed a 84MB/s difference between the 128GB and 256GB drive on a system with Windows 7 and a less significant 28MB/s difference on Windows 8.1. The Anvil benchmark utility showed the Random Read scores were better on the 128GB drive and this time around it was significantly faster on the Windows 8.1 system than the Windows 7 system. Those are Corsair’s internal numbers and aren’t done by Legit Reviews. The only reason we are selectively showing a couple results is to show the performance difference between the 128GB and 256GB drives. 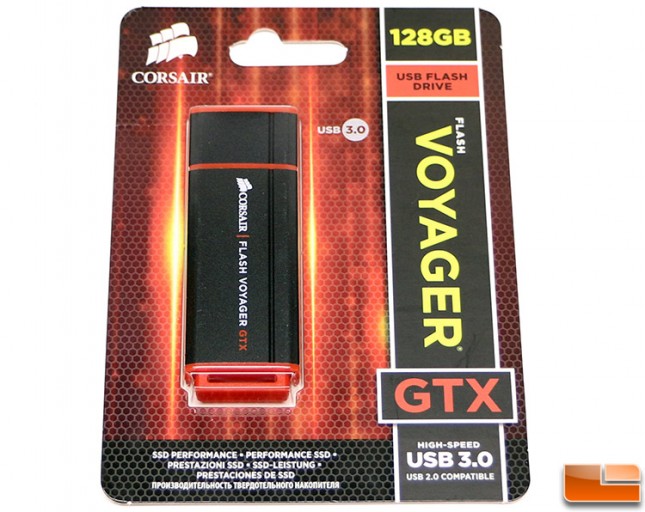 Corsair sent over a retail packaged Flash Voyager GTX 128GB USB 3.0 Flash Drive with part number CMFVYGTX3-128GB for Legit Reviews to try out. This isn’t the highest capacity drive, but it should be the drive that has the best performance and we are sure that Corsair wants to show off the super-fast SSD data transfer speeds that this drive offers. If you buy one of these drives you should keep in mind that Windows 7 lacks native support for UASP (USB Attached SCSI Protocol) and requires motherboard driver support for UASP over the USB 3.0 ports. Windows 8.1 on the other hand has native support for UASP and should have better performance. How much better? Without a UASP driver, a system running Windows 7 can be as much as 35% slower on sequential write speeds versus a Windows 8.1 system with UASP. 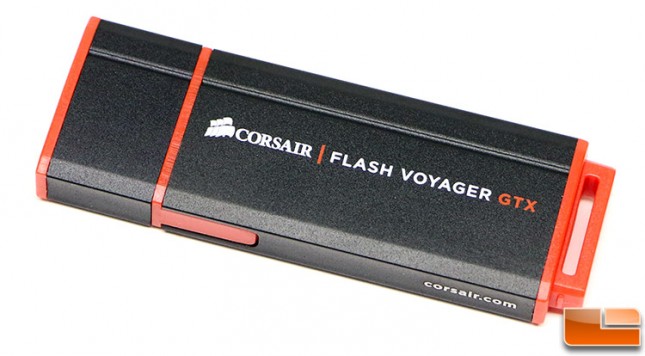 The Corsair Flash Voyager GTX comes clad in a rugged anodized aluminum casing that is black and has kind of a matte finish that resists finger print smudges. The retail packaging says that this drive has a brushed aluminum finish, but we think that is a typo that got carried over from the Corsair Flash Voyager GS packaging as this drive does not have a brushed finish. 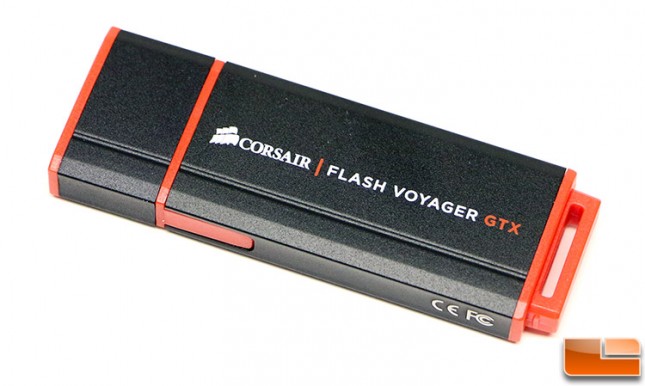 Corsair went with red plastic accent pieces and adorned three of the four sides with Corsair logos. No capacity is shown on the outside of the housing and we like that. These high-end performance flash drives scream steal me to begin with and adding 128GB or 256GB on the outside only further entices those people.

The cap on the Corsair Flash Voyager GTX clicks on pretty solidly and doesn’t feel like it will come off too easily. If you do hit the cap against something firmly it can be knocked off and lost, but all thumb drives with caps run that risk. The end of the flash drive has a keyring/neck-strap loop and also doubles as a storage cap holder. Corsair doesn’t include a keyring or lanyard, but most people have access to one at home if it is desired. 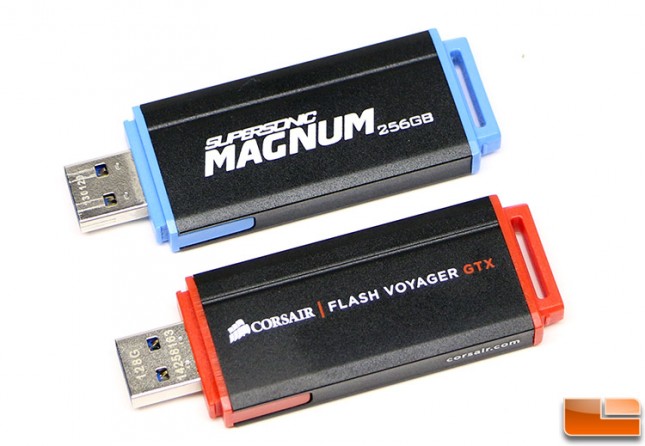 Does the metal housing on the Corsair Flash Voyager GTX looks familiar, but you can’t quite put your finger on it? That is because it has been around for a number of years and was used by Patriot on the SuperSonic Magnum series and Corsair used it on the Flash Voyager GS series last year. We love the heft of this metal housing as it has a quality feel too it, so no complaints there. The one big difference that we noticed between the two enclosures is that Corsair included an LED activity light at the end of the device. Other than that the devices are the same size. We’ve used the Patriot Supersonic Magnum for over a year and have found the size of the drive to be okay, but it does block the USB port next to it on some laptops and on others it blocks the laptop power port. At 77mm x 28mm x 8mm (L x W x H) and about 25 grams, the Corsair Flash Voyager GTX will be hard to lose!

Corsair told us that their SSD Toolbox utility could be used to manage TRIM on the Corsair Flash Voyager, so we fired it up to see what was going on there. We were always told that TRIM commands were for SATA attached devices only and that SuperSpeeD USB 3.0 devices couldn’t pass the TRIM command. After firing up Corsair SSD Tool Box v1.2 we found that the options to optimize the drive with TRIM and the secure erase wiper were both greyed out and not available. The good news is that the Phison PS3109-S9 SSD controller has garbage collection algorithms in the firmware that help prevent performance degradation over time.

7/15/2014 2:30PM CT UPDATE: We contacted Corsair about not being able to manually TRIM the drive and they responded with this statement:

Under Windows 8 or Windows 8.1 the Voyager GTX can be manually trimmed or trimmed on predefined schedule using built in Disk Optimization tool. One detail to note is that for this to work, Voyager GTX needs to be formatted as NTFS. For compatibility with MacOS systems Voyager GTX ships as FAT32 drive.

So, Corsair ships the drive with the FAT32 file system to get the best out of the box compatibility for consumers. You might want to reformat the Flash Voyager GTX with the NTFS file system to remove the 4GB-per-file capacity limit before you start using it if you are a Windows user. 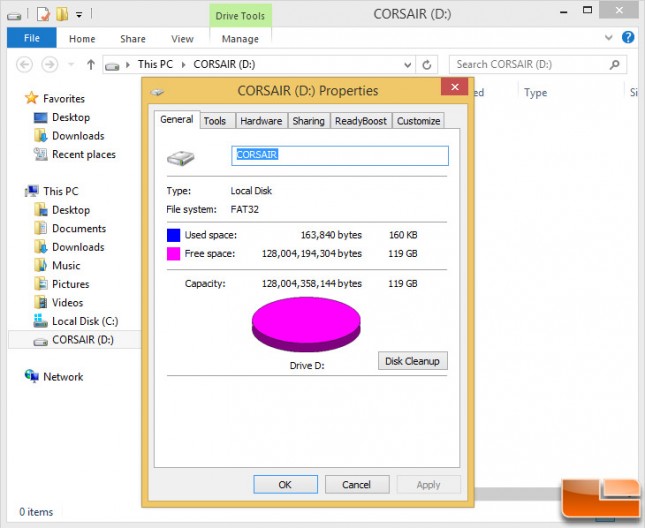 It also appears that the Corsair Flash Voyager is overprovisioned by about 8GB or roughly 6.25% of the NAND Flash isn’t seen by the operating system and is reserved for garbage collection and wear leveling duties. On our 128GB drive we found that inside Windows that only 119GB of data is shown thanks to overprovisioning and the fact that most companies define a megabyte (MB) as 1,000,000 bytes, a gigabyte (GB) as 1,000,000,000 bytes and a terabyte (TB) as 1,000,000,000,000 bytes. A computer operating system, however, reports storage capacity using powers of 2 for the definition of 1GB = 230 = 1,073,741,824 bytes and therefore shows less storage capacity. Available storage capacity (including examples of various media files) will vary based on file size, formatting, settings, software and operating system, such as Microsoft Operating System and/or pre-installed software applications, or media content.

Let’s take a look at the test system and then get onto some benchmarks!