Of course, the minute I received the drive I started of dreaming up ways to circumvent the security mechanism of the drive. My first thought was, hey, this has a battery in it so if I remove the battery it will reset the drive and allow access to the data. When we asked Corsair about this and if the battery is replaceable, we were told, The battery is non-replaceable, just like the Apple iPhone. If the battery dies, the end user can still power it off the USB port and enter the pin code. You wont lose your pin code or anything if the battery dies. When we asked what the purpose of the battery was, we were basically told that it was so the drive could be unlocked while unplugged as a matter of convenience for the user. 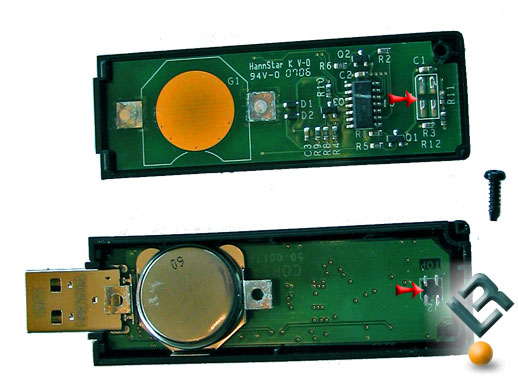 With all that said, I decided to give everyone an extra peace of mind and test it for myself. Dont try this at home kids! There is a small screw on the back of the drive, which I removed. I was then able to pull the framing of the front. I could not pull the drive apart to access the battery easily and I ended up breaking the solder points at the foot of the drive (see arrows). It obviously was not meant to be pulled apart. I then removed the battery for an hour and set to trying to put it back together again. After several attempts, which included the use of super glue and a rubber band, I was able to get the drive working again (phew!). I was not surprised to find that the drive was still locked and the data could not be accessed until after I entered my code. This being the case, I am very satisfied that the Flash Padlock is a safe and effective device for transporting and safeguarding your data. In fact, the only way someone can access the data is if you forget to remove it from the computer.