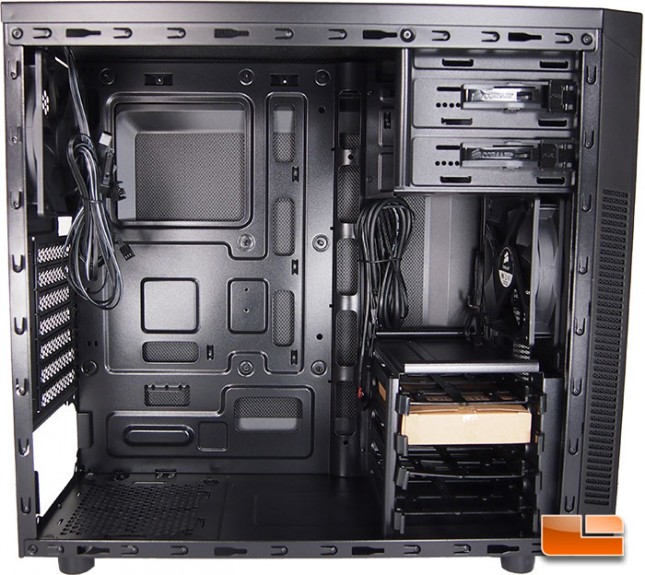 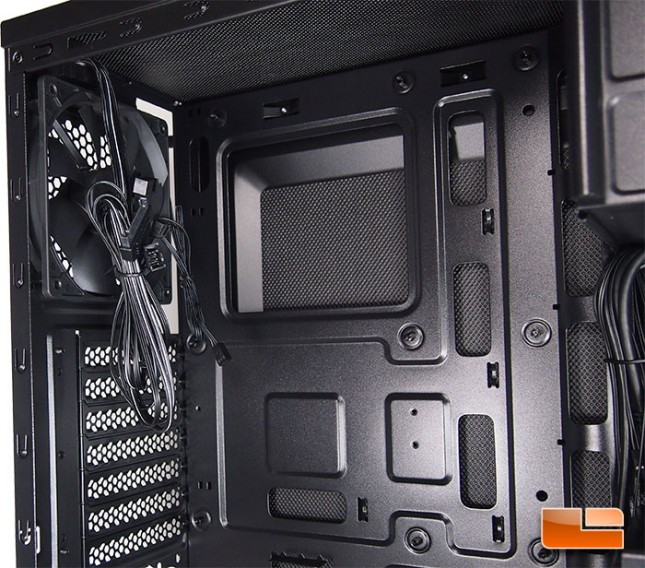 The Corsair Carbide 100R Silent Edition is equipped with two 120mm fans, the first as can be seen above is set up as an exhaust fan. The second is up front and is working on bringing in some fresh cool air. The Corsair Carbide 100R will support a variety of motherboard form factors. The smallest is a mini-ITX, but it will also support a m-ATX as well as an ATX motherboard. Corsair has removed a section of the tray behind the CPU (which is pretty common) to make it easier to access the CPU cooler back plate. This makes it considerably easier to change the CPU cooler without having to remove the motherboard.

The Corsair Carbide 100R Silent Edition as well as the base model each feature a pair of 5.25″ drive bays. I may be one of the few, but I still like to include a burner of some sort into my builds for the rare occasion that I use one. If it isn’t in your build plans for an optical drive, you can always use one of the bays for a card reader or an additional fan controller. 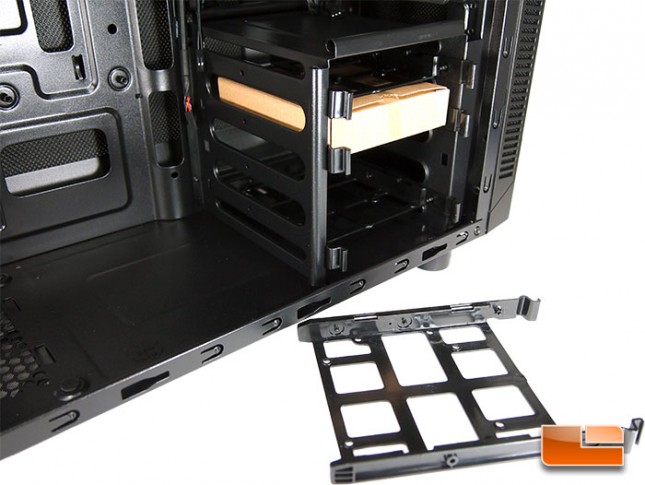 The Carbide 100R chassis will support up to four hard drives or SSD’s. It’s not the most I’ve ever seen in a case, but it should be enough for most people. Personally I rarely run more than two drives, one boot SSD and one larger Storage Drive. 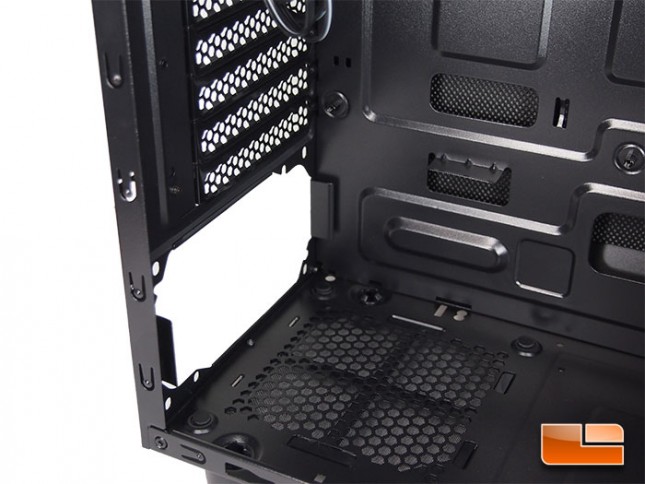 Depending on the design of the power supply that is being installed into the system, it may end up orientated the wrong direction. Corsair has designed the Carbide 100R Silent Edition so that the power supply can be flipped over to match what the system needs. Below the power supply, there is plenty of room to breathe thanks to all of the hexagon cutouts. 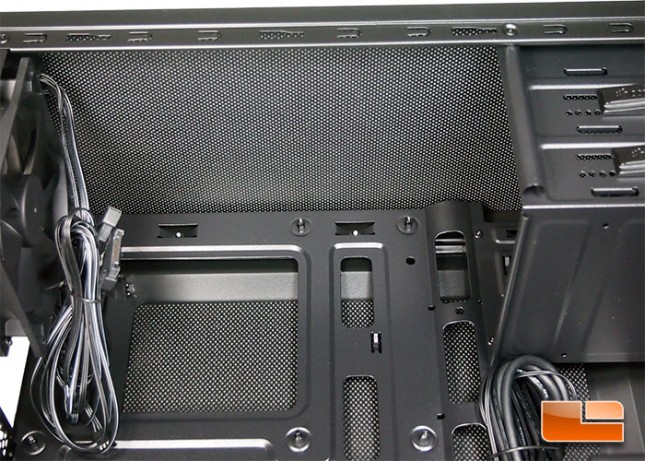 The sound proofing that is being used on the Corsair Carbide 100R Silent Edition is seen above covering the top and the side panel behind the motherboard tray. While it’s not being shown, it does cover the other side panel as well. 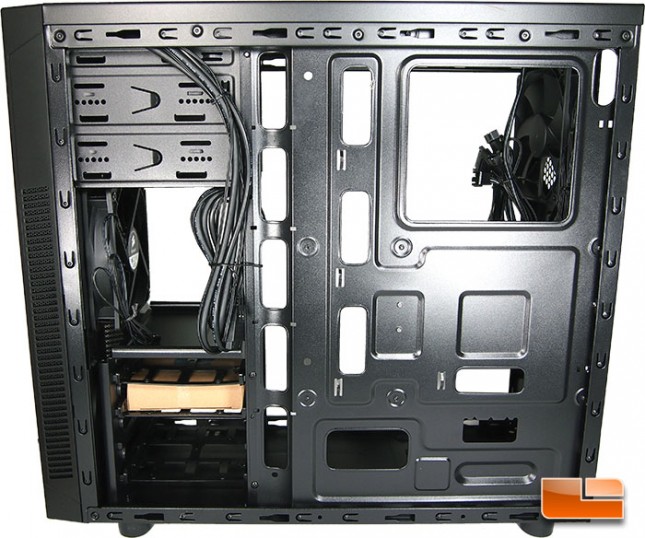 Spinning the Corsair Carbide 100R around to look at the back of the motherboard tray it looks like there is plenty of places to route the power supply cables. Next to each of the cable cutouts, is a smaller cutout with a bar running across to attach a zip tie to that will secure the wiring in place. 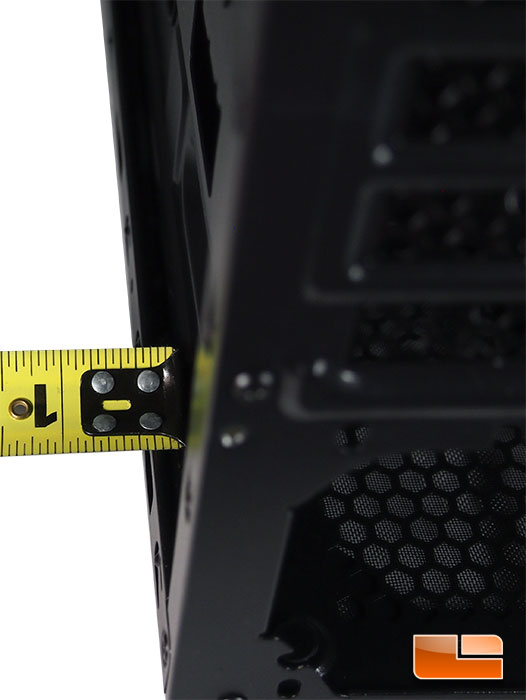 Between the motherboard tray and the edge of the Carbide 100R there is only 3/8″, the side panel is formed so that it will give you an additional 1/4″ for a total of 5/8″ to run all of your wiring behind the tray. 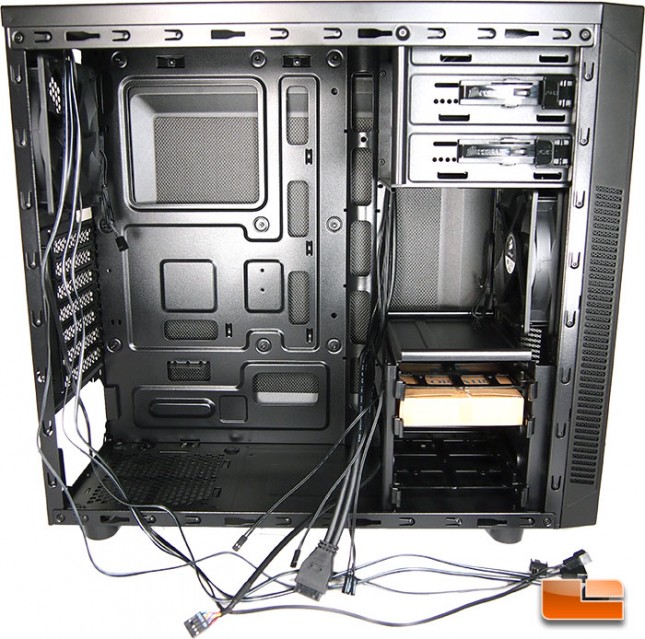 There is certainly no shortage of wires for the front panel or the fan speed selector switch! There is more than enough wiring to run those cables anywhere you’ll need to.

That’s all there is for the inside, now let’s move on to the build on the next page!