What’s that? the front bezel pulls forward? why yes it does. Once pulled forward it gives you a clear vies of the actual front mesh bezel hidden underneath. With the front facade closed I was actually amazed at the negative pressure pulled in by the two stock front mounted fans. I thought this feature would impede airflow, but in all reality it adds a lot of pressure to the front intake which only adds to the airflow of the Cooler Master MasterCase Maker 5t. The front panel does pull forward far enough to allow your optical drives to open and close without any hindrance. 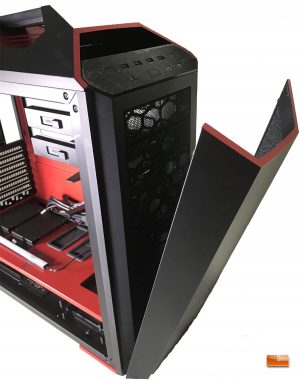 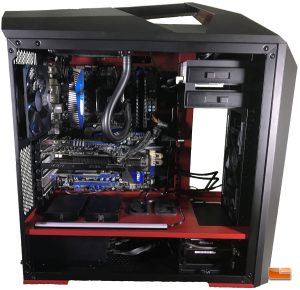 I decide to leave the LED strip where it was although it can be moved to any metal surface inside the Cooler Master MasterCase Maker 5t as long as it can accommodate the length. Below you can see that even with full daylight the LED light is still fully visible. There is nothing better than showing off the inside of your rig with some lighting. One thing you can’t see is my radiator, all you see is the hoses going up into the top of the Cooler Master MasterCase Maker 5t. It gives it a nice clean look that is not cluttered up. 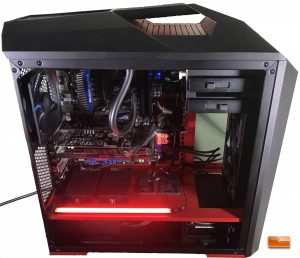 With the tempered glass sides on you can still see your build as well as the bright red illumination of the LED strip. 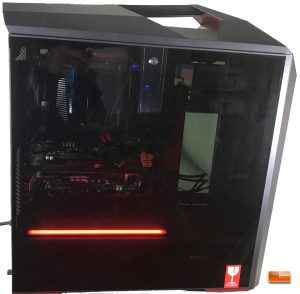