Wireless performance is a big deal for most people and we are very lucky to have Charter Spectrum with 100Mbps download and 5Mbps upload speeds. We connected to our home 802.11ac wireless network and found that the ASUS MeMO Pad 7 has just 802.11b/g/n 2.4GHz WiFi (single stream + single band). There is no 5GHz band supported, so you can see this budget tablet doesn’t have a cutting edge wireless radio and the WiFi was one of the areas that was sacrificed to get this tablet down to the $149 price point. Let’s see what happens when we test the ASUS MeMO Pad 7 and the Google Nexus 7 (2nd Gen) tablets on the 2.4GHz band.

As you can see we were getting about 10Mbps down and 5Mbps up on the ASUS MeMO Pad 7. The fastest download speed out of the MeMo Pad 7 that we were able to see in the month that we’ve been using it is just 10Mbps. The results shown here were taken back to back in the same exact spot on the test bench.

We were hitting 39Mbps down and 5Mbps up on the Google Nexus 7 tested a minute later in the same exact spot. The Google Nexus 7 Gen 2 felt much faster when browsing the web because of the speed difference. The pages were loading nearly twice as fast due to the wireless adapter used. This is something the benchmarks failed to pick up on, but something we could easily ‘feel’ when using the two tables side by site. ASUS doesn’t say how many streams either notebook has, but it appears the MeMO Pad 7 has just a single stream and that is why there is such a performance difference between the two tablets.

When it comes to battery life the Google Nexus 7 (2013) and the ASUS MeMO Pad 7 are pretty much identical with right around 250-260 minutes of battery life when tested with the GFXBench 3.0 Battery Life Test application. Did you notice that the ASUS Memo Pad 7 loses the performance battery life test though? Let’s take a look at the detailed performance chart for those test runs and see what the differences are. 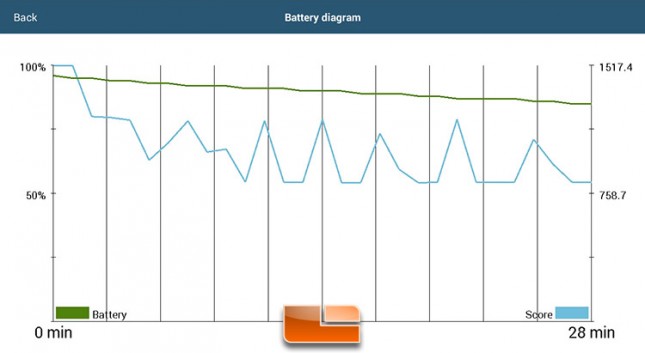 The ASUS MeMO Pad 7 might have been similar to the Google Nexus 7 (2013 Edition) when it comes to battery life, but we noticed that the performance between the two during the battery run down test was very difference. For example the Google Nexus 7 performance was flat and remained at 924.4 points for the duration of the 28 minute long battery run down test. The ASUS MeMO Pad 7 performance started out at around 1500, but after a short period of time you can see that Intel Turbo Boost technology stopped and the performance of the processor dropped down to around 775, which is about about half the speed it used to be. Interesting to say the least. It should be noted that we tested with the ASUS Power Saver smart saving technology disabled.