Using a reliable P3 Kill-A-Watt meter, we monitored the power consumption of the test system throughout the testing phases.  During each test, we made note of the lowest and highest readings, these are the readings we are taking a look at. 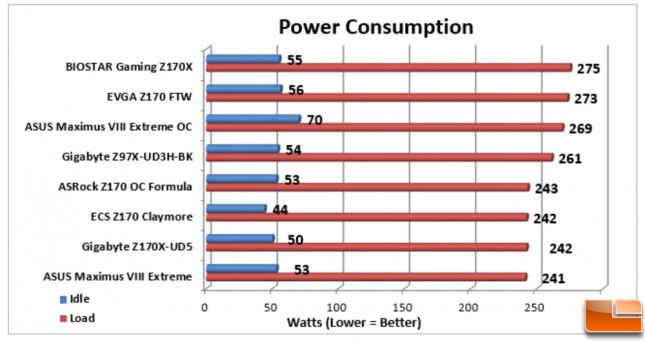 Legit Bottom Line:  At Idle, the ASUS Maximus VIII Extreme was pulling 53W, placing it in the middle of the pack for the Z170 motherboards.  At load, it pulled down 241W, making it least power hungry motherboard when under a full load.  Even once it was overclocked to 4.9GHz it didn’t draw much more power.  At idle it went from 53W to 70W, and under a load it went up to 269W, which placed it behind two other Z170 motheboards at base clock speeds for power consumption.  Well done ASUS!

The testing environment was kept at a constant 72F (22.2C), we used HardwareMonitor to evaluate the CPU temperature during the testing phase, the highest and lowest reported temperatures are being reported. 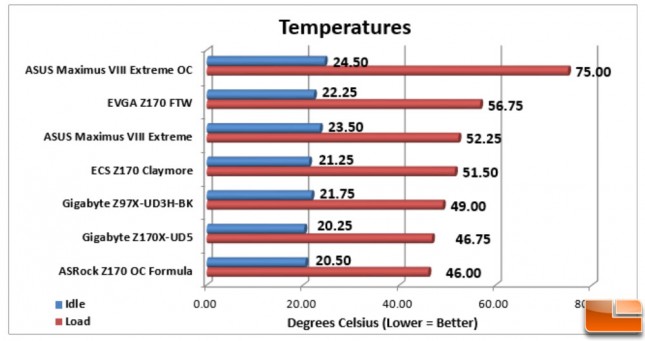 Legit Bottom Line:  Temperature wise, the ASUS Maximus VIII Extreme was a little warmer at idle, and slightly warmer than most under the load conditions.  Of course, as you might expect, when we overclocked the system, the temperatures rose.  What surprised us is that even at 4.9GHz, the CPU didn’t get above 75C!