For Sisoftware Sandra, we have run your basic battery of tests that test the CPU, Hard Drive, and Memory.  The first benchmark we have here is a Simple Processor Arithmetic Benchmark. 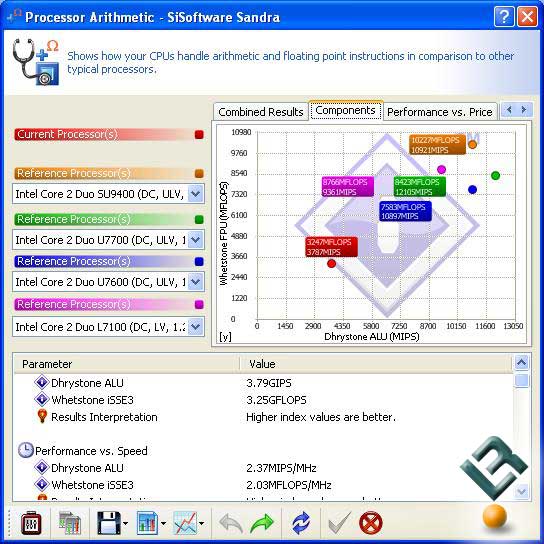 Here we see here that the Intel Atom CPU of the ASUS EEE PC scores better than the Intel Celeron Based EEE PC.  For comparison the Celeron Based EEE PC scores 1.835 MIPS in Dhrystone ALU, and 1.37 MFLOPS.  It score about one third of your LV Core 2, and that is nothing short of impressive.  One third of a Core 2 Duo in a package that uses almost no wattage is amazing.

Next up we have the Sandra Benchmark of the 1GB of PC2-5300 Ram.  There are no special tweaks to the system so the memory here should score what any standard memory of this speed scores. 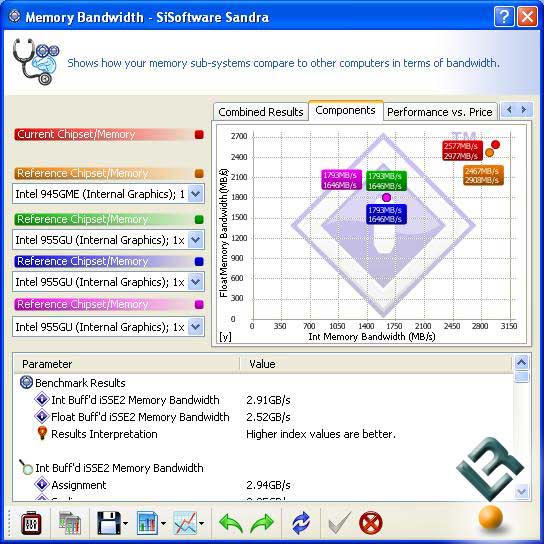 As we can see from the chart, the memory scores just a tad bit above what the standard score that Sandra uses to chart its score.  This is right in line with what we would expect.  Finally we have our benchmark of the 5400RPM Seagate Momentus Hard Drive that the ASUS EEE PC comes with in this configuration.  Once again there is nothing here out of the ordinary. These scores are in line with the trend lines of the other drives that Sandra uses as a benchmark 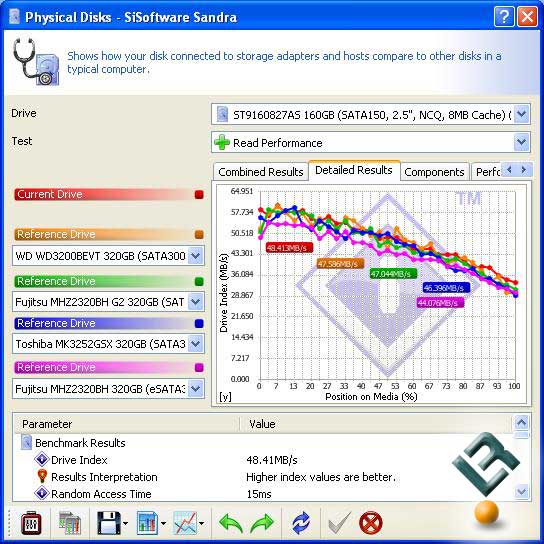 In line with Hard Drive tests, we also ran HDTune Pro on the ASUS 1000HA, for the only reason than to check our results.  HDTune also is a bit more precise than Sandra, because it specifically created to benchmark hard drives. 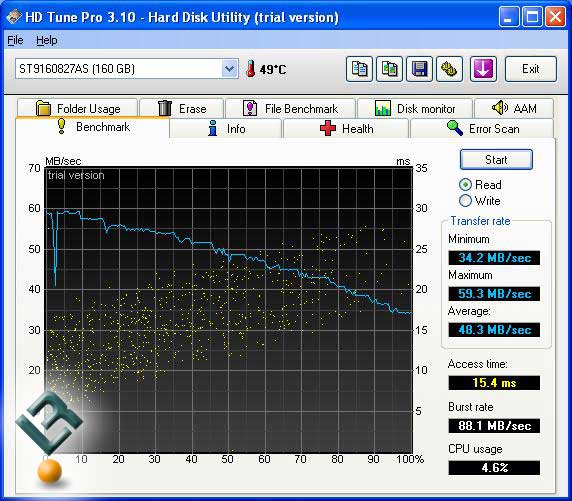 Here we can see that HDTune Pro is inline with the Sandra results for the Hard Drive.  The Seagate Momentus Hard Drive achieved a very capable burst rate of 88.1 MB/s.  At no point when using the Asus EEE PC 1000HA did I notice any slowdowns due to the hard drive.  I even remarked to a coworker that the ASUS EEE PC 1000HA came with a 7200RPM hard drive.  It was not until I ran HDTune Pro that I discovered that it was indeed a 5400RPM Hard Drive.  I even went so far as to open the bottom of the EEE Pc to check the label, and I did indeed verify the speed to be 5400RPM.  This is just a testament to ASUS use of great parts by including a high quality Seagate Hard Drive.

Our final benchmark is the staple for Graphic Benchmarking, 3DMark06.  Now the ASUS EEE PC 1000HA comes with Nvidia integrated graphics, so I would not expect anyone to be gaming on this system. 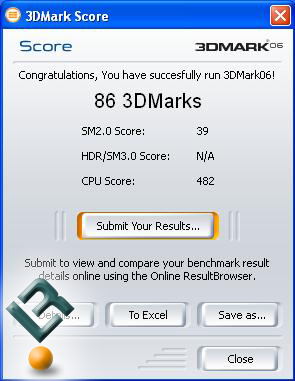 Sure enough, our results verify my assumption, that Intel Integrated Graphics are great for basic word processing and web surfing, and should never be used for anything but.  3DMark was painful slow during benchmarking, and I never saw the FPS Counter go above 0.  The CPU score was very respectable for a single core Atom chip, and scores nearly three quarters of a Pentium 4 3.2GHz chip.  The CPU score really shows the incredible design and efficiency of this low voltage chip.

Our last benchmark is PCMark05.  There was a bit of a change made to this benchmark.  While the other benchmarks were run at 1024X600, which is the default resolution for the ASUS EEE PC 1000HA, PCMark05 specifies a resolution of 1024X768 as the minimum in which to run its graphical tests.  So using the VGA output we connected to an external LCD Monitor set at 1024X768 to run the benchmarks.  If this was not set, we would not have been able to run the benchmark. 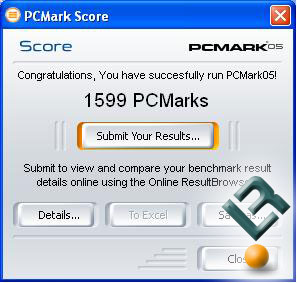 As we can see in the images above and below, the ASUS EEE PC 1000HA scored very respectable for a netbook that is just meant to be utilized for web surfing, email and basic word processing.  At no point did the benchmarks employed in graphics testing lag whatsoever.  Now it should be noted that the graphic benchmarks in PCMark05 are not as strenuous as 3DMark06, but what should be taken away from this is that this netbook is more than capable for its intended tasks.  It is a testament to Intel’s design of the Atom chip at work here. 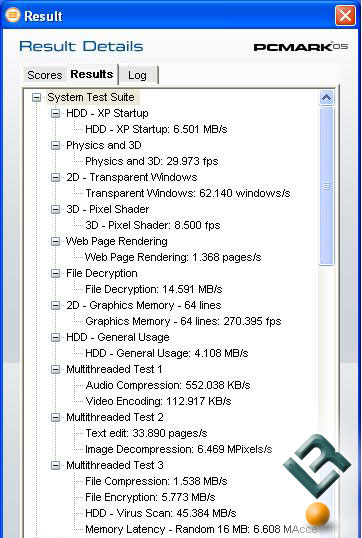 The Intel Celeron based ASUS EEE PC 900 netbook scores on average 1200 PCMarks, this system scores close to 1600, which is very impressive.  A laptop with similar specs and a 1.333GHz Intel Core Solo, scores about the same as the EEE 1000HA at around 1600 PCMarks. This system is nothing to laugh at when it comes to performance and is one very powerful netbook.

With the benchmarking all wrapped up, let’s have some fun with the Netbook and see what Ubuntu can do to jazz up this ASUS EEE PC 1000HA netbook.