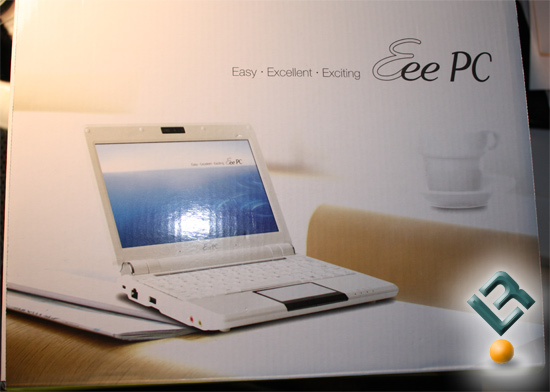 Here we have the box the ASUS EEE PC 1000HA arrives in.  I was very impressed in the way which the EEE PC 1000HA was boxed.  Everything was clearly thought out for both shipping and appearance with each component thoughtfully placed and protected from scratches and dings.  All the assorted parts had their own compartments and allowed for future use to re-store the ASUS EEE PC 1000HA later on. 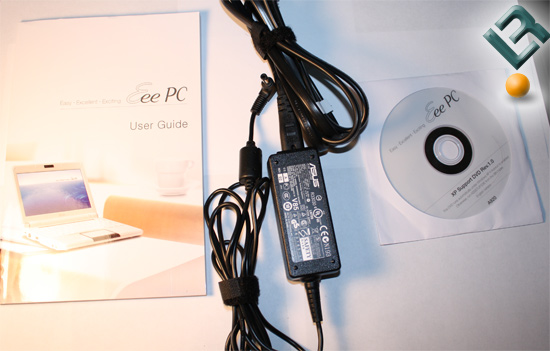 Above we have the manual, power-brick and DVD Restore disk for the ASUS EEE PC 1000HA.  When the power brick is plugged in, it has a bright blue LED that glows to indicate power to the brick.  ASUS was generous with the length of the power cord, with it easily stretching seven feet in length, allowing the user much mobility to move around when the ASUS EEE PC 1000HA is charging.  Not shown in the picture, but included, is a blue cleaning cloth that can be used to wipe fingerprints and grime from both the netbook’s screen and case. 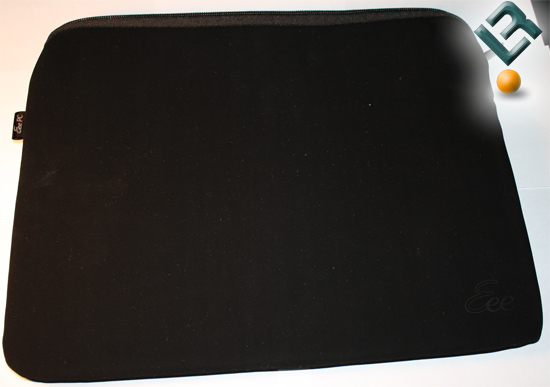 Above we have a Laptop sleeve proudly that displays the EEE PC logo.  The sleeve fits snuggly around the EEE PC, and serves as both a way to put the ASUS EEE PC 1000HA away when not in use, and to protect the highly glossy finish of the netbook from both scratches and fingerprints. 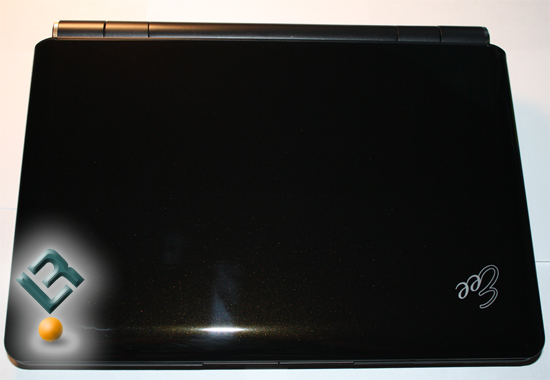 Here we have the netbook itself, with a high gloss jet black finish.  As you can see from the picture, even my best efforts were not enough to keep finger prints from getting on the unit.  After a week’s worth of use, it was hard to keep finger prints off the netbook, especially where your hands touch the unit to flip the screen open.  After a while I just gave up, and resigned myself to cleaning it once every day.  No cleaners were needed; using the included cloth worked quite well.

Here we have the left side of the netbook displaying the Ethernet jack, one of three USB ports, and the microphone and headphone jacks.  Also in the middle is the fan exhaust.  When in use, the fan is barely audible, and the only way to tell that the fan is even working is to feel if warm air is flowing from the exhaust.  Also on the far left is a security port where one can attach any type of locking mechanism to keep your device from being stolen.  This is typical of an application in a computer lab in a school.

Here is the right side with SD Card slot, the remaining two USB jacks, VGA Connector and Power Adapter.  The SD slot is a bit different than most that I have used in laptops in that usually about a centimeter of the card sticks out of the slot.  With the ASUS EEE PC 1000HA, it does not, and you have to use your finger nail or pen to push the card scarily in, and to push the card in to remove it.  It’s rather annoying for those of use who don’t have fingernails.  The power jack holds the power cable in very tightly, but its placement leaves much to be desired. I found that with its right angle jack design I have to keep positioning it to the back to prevent it from becoming tangled in with my mouse.  Also it is odd to see a USB device plugged into the netbook because they stick out so far and seem to dwarf the netbook in comparison.

Here we have the 1.3 Mega Pixel Camera (read on for further testing on the camera).  One note, though, is like the case of the netbook, you have to look out for fingerprints.  I spent a while trying to figure out why I could not get the camera to focus before I realized that I had a nice greasy fingerprint right on the lens. 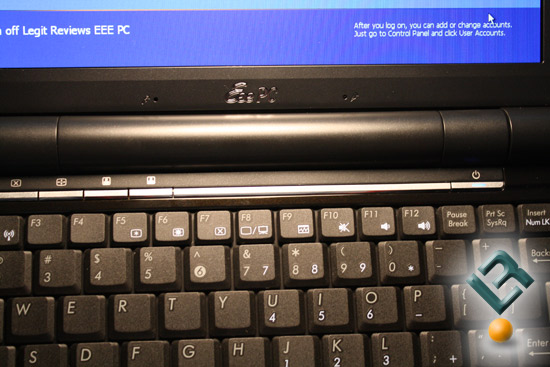 Here we can see the bezel of the ASUS EEE PC 1000HA.  On the right, we have the power button which is illuminated with a blue LED.  The blue LED is solid when the device is in use, and blinks when the device is in sleep or hibernation modes.  On the left we have ASUS’ Instant Keys.  The first key toggles the backlight off and on, which is a great feature to save battery life.  The second key toggles the different resolutions that the netbook can display.  The final two keys are user defined keys, with the defaults being to control the ASUS Hybrid Engine and Skype.

Here we have the trackpad.  I must admit, I’m not a big fan of this trackpad, and was a bit spoiled by the nice Synaptic Trackpads that are currently on most Dell Laptops.  The trackpad, although generous and equal in size to that of a normal full size laptop, lacks the needed sensitivity I required.  I found that scrolling was very slow, even after tweaking the trackpad.  I also found the two “mouse” buttons to be rather stiff and oftentimes required that I click them twice, due to not applying enough pressure.  Finally, the placement of the pad was too low, which caused the “mouse” buttons to be at an odd forty-five degree angle.  On the far right we can see the four system LEDs.  Starting on the left we have the power LED which stays a solid green, the Battery Indicator LED which is Red when on AC Power or Charging and green when on Battery, the HDD Activity LED which blinks green on Disk Activity, and finally the Wireless LED which is illuminated blue.

With the netbook thoroughly inspected let’s move on to the Operating System and Applications that come preinstalled on the ASUS EEE PC 1000HA.