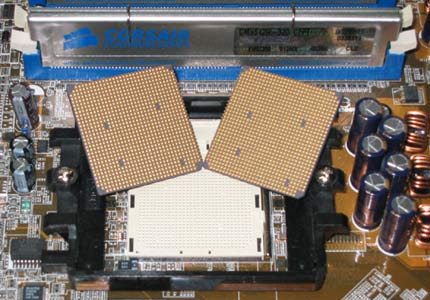 After looking at the benchmarks it is clear that a 200MHz increase in the FX line boosts performance roughly 10% across the board on the majority of benchmarks used. This makes perfect sense as it truly is a 10% increase in overall frequency. With FX-53 flying along at 2.4GHz it is truly impressive seeing it hang neck to neck with the 3.4GHz Intel Extreme Edition processor. The FX-53 processor leads in a fair share of benchmarks and hangs tough with the seven other processors it was tested against in this review. Even more amazing is how the FX-53 also happens to run a tad cooler than the competitions processors with a Max Thermal Power rating of 89W, which happens to be quite a bit lower than the Intel P4 3.4 EE processors 103W.

Pricing on the FX-53 at launch will be at the same price as the current FX-51 $733/each (in 1KU quantities). After the launch the AMD Athlon FX-53 will replace the FX-51 at this price and the FX-51 should have a price cut. How far the FX-51 will come down in price should prove to be interesting. The 3.4GHz Extreme Edition that we tested along with the FX-53 was very impressive, as well as the $999 price tag that comes along with it. With the FX-53 placed at a price point roughly $250 lower than the Intel 3.4 EE it is easy to ignore the few areas that the FX-53 lags behind the Extreme Editions. Not only did the FX-53 prove to be fast it was was a very stable processor. Not one BSOD or problem happened to pop up during testing over the past days of testing under full load.

When a new processor comes out we like to contact some of the major online retailers and check pricing and availability. This time around we found that the majority of retailers we checked didn’t have enough in stock to put them for sale for the day of the launch. Meaning they have a handful (5 at one popular store), which shows this wont be a paper launch, but quantities are limited. The retailers also stated that the original quantity they ordered was supposed to arrive by months end according to AMD. Although many may want to poke a stick at this it is actually a good sign that retailers have the FX-53 in stock (partly) or on the way. The Intel Pentium 4 3.4GHz EE and E are still missing from many online retailers and pricing search engines such as our Dealtime shopping service lists that only the 3.4 C is in stock at the current time.

One last thing to keep in mind is that AMD’s Socket 939 processor is now closer to becoming a reality and when that happens socket 940 will no longer be the top dog. While Socket 939 more than likely not give end users an enormous performance increase, it will be cheaper to build a socket 939 system (does not require registered memory) and there will be performance increases (estimated at <5%).

The FX-53 runs head to head with the Intel Pentium 4 EE, but does so with cooler temperatures, a lower price point, and is 100% 64-bit software ready!