After spending a couple weeks using the AMD Radeon RX 590 on our gaming test platform we are happy to report that all did really well at 1080P and 1440P gaming. The three models that we looked at today are very similar in design and none really stood out from the pack when it came to performance or features. None had any glaring defects and the performance between the cards was insurmountable to tell during gaming. We noticed temperature differences, but the target temperatures were factory set to differently. It’s hard to compare temperatures of these three cards when they are designed to run at the target temperature.

Overclocking was our last hope at trying to get any one of the cards stand out from one another and that too failed to show a difference. The top clock frequency on all three cards was basically the same and performance was within a percent of one another. 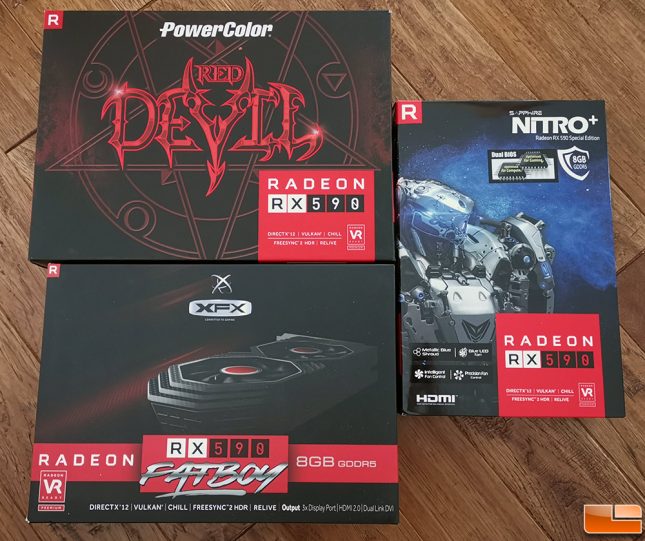 The other big factor in purchasing video cards is the warranty length. PowerColor and Sapphire both back their custom AMD Radeon RX 590 cards with a 2-year warranty. XFX is the only one of the three companies in this roundup to offer a 3-year warranty.

That means XFX’s Radeon RX 590 model has the lowest price and the longest warranty of the bunch. Gaming and overclocking performance is a wash between all these models, so it looks like XFX offers the best value of these three cards. It ran the hottest at 80C, but you can always reduce the target temperature in AMD Wattman or edit the vBIOS to lower that if you’d like. We know this isn’t a super exciting conclusion, but that is what happens when AMD refreshed the same GPU core not once, but three times.

Legit Bottom Line: We expected to see some decent differences between these three Radeon RX 590 models, but at the end of the day they all offered very similar performance at their stock settings and when manually overclocked. Our advice after spending a couple weeks using these cards daily is to buy the model that has the lowest price with the longest warranty.