As always we must overclock and push new technology to the edge and find the breaking points. Lately Legit Reviews has been going for stability and quality of our overclocks rather than showing a single benchmark and showing off unstable results. When it came to overclocking the AMD Athlon 64 FX-51 we first tried to find the maximum overclock with the default voltages and had some pretty good success. Our final stable overclock at default voltage was 2.31GHz and this is what we ran in all the benchmarks while overclocked in the benchmark graphs. 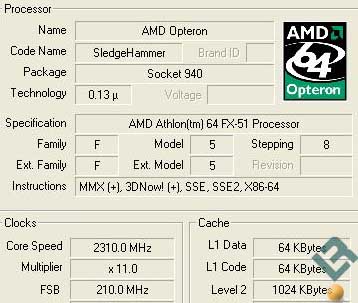 As for how much futher the Athlon 64 FX-51 can go, I guess you will have to wait as just in the past 4 days we have gotten in Kingston HyperX Registered/ECC PC-3200 and the Thermaltake Venus 12 cooling solution that may aid in overclocking beyond where we are at today.

I must say after having the Athlon 64 FX-51 up and running every day now for over a month that the Athlon 64 FX-51 is definantly ready to be used by the enthusiasts. It is nice to have a low temperature AMD Athlon processor in the computer that is able to top the current Intel processors that one can buy today. We know the Pentium 4 EE has been announced, but none are on the shelves yet and even we do not have one yet as only few are available. Consumers need AMD and Intel to stay in close competition as both companies will turn out products quicker and more often at a lower price to win market shares. A big kudos goes out to AMD for bringing 64 bit technology to the high-end home user market before 2003 comes to an end!

With the initial MSRP of US $733 on 9/23/2003 the Athlon 64 FX-51 is not in the price range for everyone, but it is right on target for the the enthusiast that wants the ultimate level of performance that also wants to be able to use 64 bit applications as they start hitting the market here in the near future. It is going to be the 64 bit applications that will be the biggest hurdle for the Athlon 64 processor to become a hit. As far as rendering time and gaming performance is concerned the Athlon 64 FX-51 is in a league of it’s own, but it really needs 64 bit software on store shevles before end users can justify the price. We have also had a chance to take a look at Windows 64 Beta and I must say it is pretty darn stable for being in Beta form still. Once Windows 64 releases I believe many more users will purchase the 64 bit processors since the added speed of Windows 64 is really impressive and will be much welcomed by power users.

I see a pretty bright future for the Athlon 64 FX series of processors as AMD has left some room to make improvements to the processor. The first thing that comes to mind is the ceramic packaging found on the Athlon 64 FX processor. The move to organic packaging will allow for future increases in speed when the time arises. From the initial processor release it seems as if AMD has done their homework and if software developers support AMD and come out with 64 bit applications quickly the Athlon 64 FX will be the processor to have! 64 bit applications are coming and this is the dawn of new hights for all computer users. The main company we have to thank for this is AMD and the people who do all the work to make this possible. Someone had to be the first to lay the foundation for 64 bit processing and AMD stepped up to the challenge with good results so far!

Will AMD’s investment and ground breaking 64 bit processor for the everyday personal computer take off and keep Intel on their toes? Only time will tell, but they have the technology and resources in place to do it!

Keep an eye on our site as in the near future we will have reviews on registered memory, Athlon 64 FX cooling solutions and the conclusion to our Athlon 64 FX-51 overclocking section.

After performing many tests on our Athlon 64 FX-51, I feel that AMD has definitely done their homework on this chip. Those who have the cash to purchase a 64 FX-51 will definitely be happy with their chips performance. Now the big question: What kind of person will actually buy this processor?

This processor has quite a few strong points that could show light on AMD’s 64-bit processor line: it runs cool, can utilize ECC Registered Memory, 64-bit technology, and is currently only 2.2 GHz. I think that the last point mentioned is where AMD has the most potential. You have seen our results against a 3.2C Pentium 4, so what kind of performance increase would we get if you ran a 64 FX-51 (or the 939-pin version) at 2.6 or 3.0 GHz? Hopefully that day will come soon!

The place where I see the Athlon 64 FX-51 doing best right after launch is in businesses. I see these processors being used as a workstation or small file server in a setting that would utilize the ECC Registered Memory feature. It is in this setting that I also see users compiling a 64-bit version of Linux as the operating system.

With that said, I have not forgotten that the Athlon 64 FX-51 performed its best in gaming benchmarks. However, I do not see the need for a 64-bit architecture and ECC Registered Memory for a gaming system, YET! If gamers want to reap the gaming benefits from the Athlon 64, I expect the majority of them to wait just a little longer for the 939-pin version. This way they do not needlessly have Registered Memory.

The last point I have to make is the price. We all know now that Intel has released their P4 EE (Extreme Edition) with extra on-die cache which may challenge (or surpass) the Athlon 64-FX’s performance. However, with both of these processor’s being over $700 on price, I do not expect many customers to buy one this second. If a customer wants to get a better price:performance ratio, they will stick with a processor like the P4 3.0C. Especially since the release of the P4 EE, Athlon 64, and very soon, Intel’s Prescott, will only lower the price of the P4 “C” processor line.

As for an ending note, AMD has been playing catch-up with Intel in the processor market. Now it seems as if AMD has finally caught up and will now be on an even playing field hopefully for some time to come. I would also not expect AMD R&D to just sit on 2.2 GHz. They will be frantically working to keep their place neck-to-neck or higher against their rival. I only expect good things in the future processor market because of AMD’s hard work!