There is no doubt that the customer base for this processor will be the enthusiast community, and cooling is a big concern with the enthusiast community. Therefore, we decided to show you the temperatures we observed based on idle and full load situations with the processor. To record the temperatures, we had to use the Asus PC Probe (version V2.21.05) hardware monitor utility that we downloaded from the ASUS website for our ASUS SK8N motherboard. For the idle temps, we let the system sit on the desktop for 30 minutes. For the load temps, we ran Prime95 and loops of 3dmark to stress the processor until the processor tempraturess maxed out. Here are our results with the retail HSF and the Thermaltake Venus 12:

As you can tell the Athlon 64 FX-51 with the Silicon on Insulator (SOI) technology is able to pull off some very low temperatures! Although once we put on the just released Thermaltake Venus 12 HSF we were able to drop the idle temperatures down to 31 Degrees Celcius at idle! We also noted that the strong 80mm fan on the Thermaltake HSF helped cool the motherboard and memory as it moved the air around in the case more. Look for a full review on the Thermaltake Venus 12 when we have more time to use it.

The AMD Athlon 64 FX processor does require registered memory in its current 940-pin configuration. The AMD Athlon 64 FX processor was designed to utilize Registered DDR up to and including DDR 400. The memory does not have to be ECC memory, but it can be if you want to run ECC memory. Will this increase costs? Sure, but remember that companies like Corsair are going to be coming out with DDR 400 memory that is Registered, but not ECC. As one would expect there will be a slight price increase from unbuffered to registered memory. Just today Kingston has released their Registered/ECC DDR 400 memory for the Athlon FX systems. At the time that this review was written the Kingston HyperX Registered DDR400 Modules were the only AMD vadilated micro BGA modules on the market. It seems that many of the other companies went with TSOP modules. Sounds like AMD and Kingston planned ahead on this one, so we have high hopes for it. Let’s use the 1GB DDR 400 Kingston HyperX dual channel kits as a price example for Registered/ECC memory versus unbuffered memory.

Unless you have registered memory laying around it looks like many will have to go out and purchase new memory for their systems if they want to run the 64-FX. Below are two examples of PC-3200 memory that is Registered with ECC. 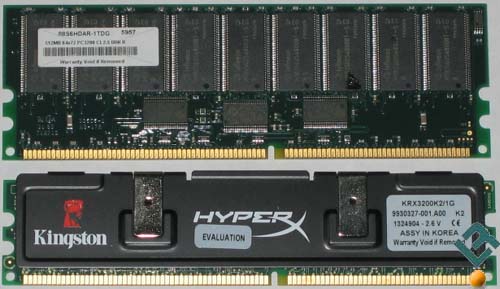