Packaged in a very smart box are the main headset, a choice of ear loops, the power brick, and USB cable.  The cable actually does not “plug” into the new Jawbone headset, rather it has little magnetic connectors that make contact with the headset for charging.  It is pretty slick and very similar to the design that Apple uses on their Macbook Air laptops.  The minimalist charging system works quite well with both your computer and the charging brick. Note that Aliph did not include a car charging accessory so you will have to make sure you charge up your Jawbone before you hit the road. 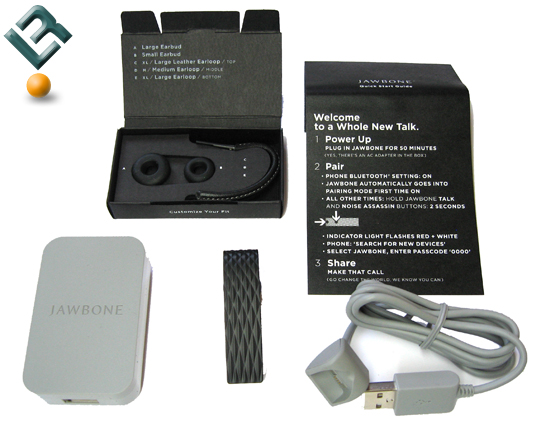 The Jawbone is quite light and even though it comes with an earloop, you can actually wear this headset without it, but the loop does make for a little safety net.  Even though the Jawbone fit in your ear pretty well, I was always worried that it would fall out at the wrong time.  That feeling went away the more I wore it and got used to the fit.

Many people will like the new earloop compared to the original Jawbone loop. It Is made out of not-so-soft leather, but is very comfortable on your ear. Unlike the original, there are 2 sized loops included with the new Jawbone – “Medium” and “Large”. Each of these come in either the leatherbound, or regular soft plastic.  The original Jawbone headset came with no less than 6 earloops!  3 for the left ear, and 3 or the right and many people had problems mounting the headset on their ear.  This new loop is much easier to put on to your ear, and you can switch ears with the headset without having to find the right sized loop.  Overall, this new design is a much simpler on-ear design than the original Jawbone that doesn’t sacrifice comfort. 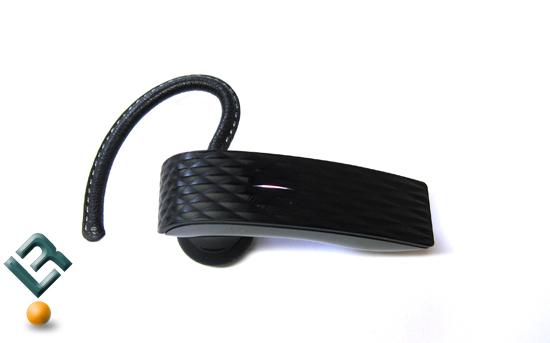 You will notice that there doesn’t appear to be any control buttons on new Jawbone.  The Jawbone actually has two “invisible buttons” that give the headset a sleeker design than others on the market.  Jawbone calls this “touch-surface” technology where the user can operate the headset by lightly pressing the outside. Actually, there are two areas that you can activate: the NoiseAssassin Button and the Talk Button.

Each button is multi-functioning, as the NoiseAssassin Button controls weather the noise cancellation DSP is engaged or not, as well as volume control, voice dialing, redial, and pairing.  The Talk Button mainly serves to activate and deactivate calls, but it also can toggle on and off the LED which is a pretty cool feature. 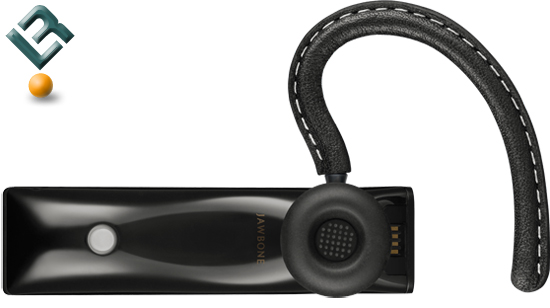 On the other side of the Jawbone, you will find the Voice Activity Sensor – and this is one of the things that sets the Jawbone brand apart from all others on the market.  When you wear the Jawbone, the Voice Activity Sensor on inner surface of the unit makes contact with your face to determine whether the sound going into its dual microphone array is from the user speaking or from the background.  Background noise is eliminated while the speakers voice is enhanced.

Aliph puts it this way:

“Jawbone is the only Bluetooth headset with a Voice Activity Sensor that touches the skin of the wearer.  It feels the speech of the user and distinguishes the human voice from the background noise, effectively removing ambient noise from the conversation”

Sounds a bit Zen-like, but whatever they did with their previous system, it worked flawlessly.  Let’s see how well it works in this new and improved packaging.