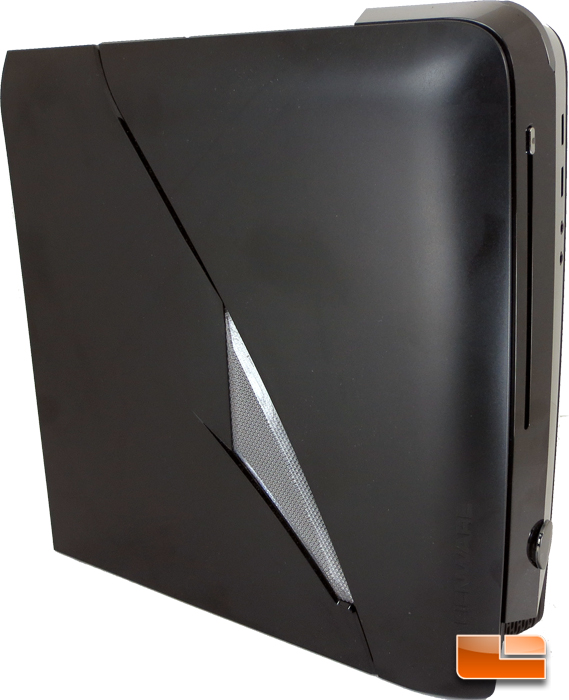 Some say desktop computers are fading into a thing of the past, personally I prefer them over a laptop or tablet any day of the week. Laptops and tablets certainly have their place in today’s on-the-go lifestyle we lead. In fact I’m typing this while sitting in a hotel room on a business trip on my laptop. Obviously there are some advantages to them, but desktop systems are my preferred system any day of the week. Dollar for dollar desktop systems offer more bang for the buck than a laptop, but laptops offer portability though you sacrifice performance. If you haven’t guessed already, today we are looking at a full blown desktop system from Alienware, the X51 R2. The Alienware X51 desktop starts at only $699 but the sky is the limit as the X51 is fully customizable. The $699 is powered by an Intel Core i3-4130 while the version we have on-hand today is powered by an Intel Core i5-4430. The Intel i5-4430 Alienware x51 starts out slightly higher at $854, though the processor isn’t the only upgrade with this version. Alienware didn’t stop at an i5 version, there is also an X51 with an Intel Core i7-4770 that starts out at $1079.

The Alienware X51 R2 that we have on hand today is the Intel Core i5-4430 edition mentioned above that starts out at $854. Ours was sent to us with a few minor upgrades, most notably the graphics card. The Alienware X51 R2 that was sent to us came loaded with an NVIDIA GeForce GTX 670. The drives in our Alienware X51 have also been upgraded. Instead of a DVD writer, we have a slot loading blueray player, our hard drive was also a step up from the standard configuration, we had a two terabyte Seagate Barracuda (P/N ST2000DM001) as opposed to the basic one terabyte drive. It drove the price up by nearly $500 having these improvements, up to $1349.00, but if you’re a gamer they will certainly be worth it. 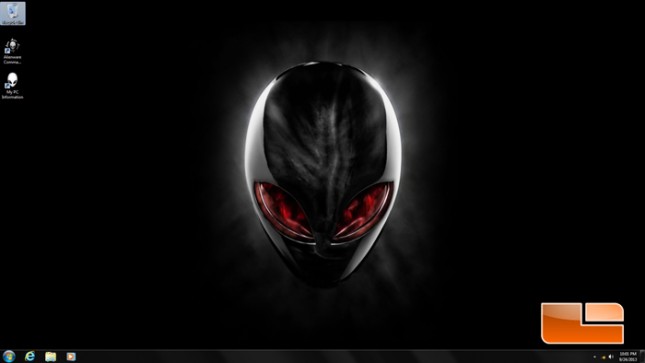 Once the Alienware X51 R2 was fired up, this is the desktop background that is the default. The only items on the desktop are the recycle bin, Alienware Command Center, and the My PC Information icon. 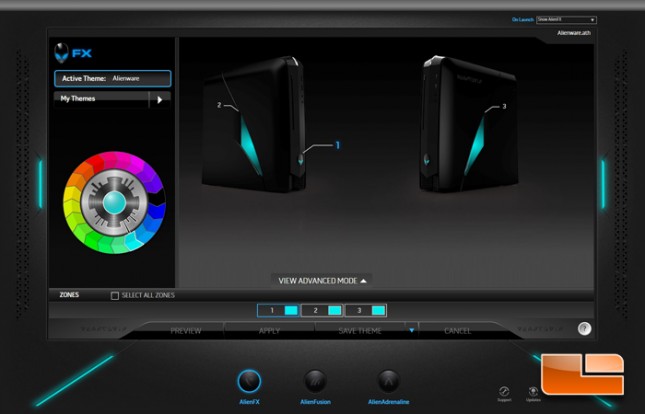 The Alienware X51 R2 has the ability to change the lighting on the chassis. To do this we simply had to open up the Alienware Command center and make the adjustments that we wanted. All three of the areas, left side, right side and Alien eyes can be adjusted independently, or you can use a predetermined profile. 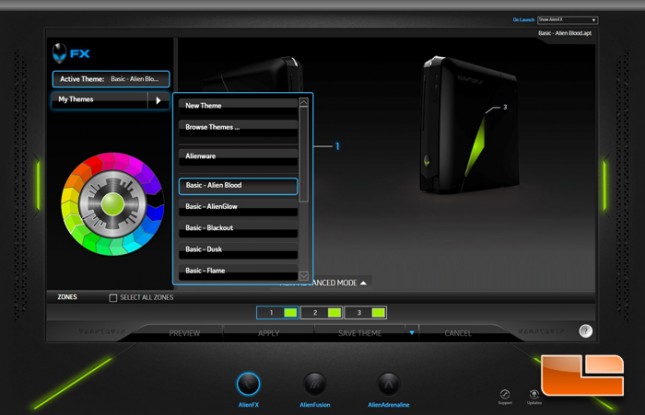 We fired up the Alien Blood profile and all of the lighting changed to a neon green. This may be a little cheesy to some, but it can be disabled if you don’t like it. The Alienware Command Center will also give access to the AlienFusion and AlienAdrenaline. AlienFusion let’s us toggle through the various power plans, Balanced, High Performance, as well as creating custom plans. The AlienAdrenaline application will create custom environments within the system, you can set the AlienAdrenaline app to change the graphics properties when you open a game, or open additional programs like a VOIP, or media player. 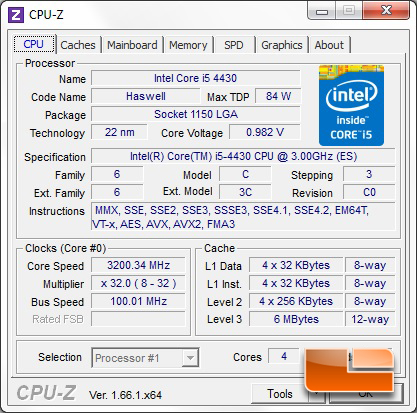 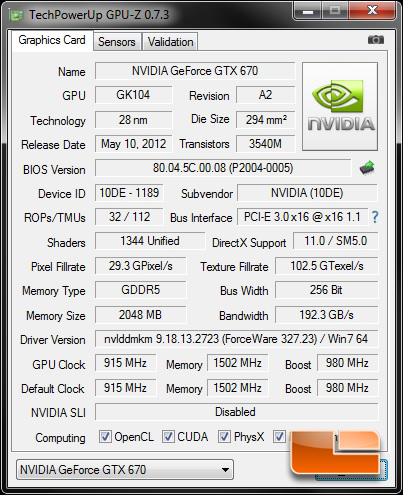 In addition to the Intel Core i5-4430 under the hood, we also have a power house of a graphics card. The Alienware X51 R2 came with an NVIDIA GeForce GTX 670 2GB graphics card. 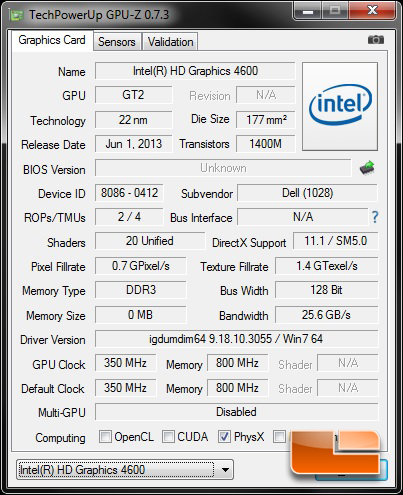 The Intel Z87 chipset and Intel Core i5-4430’s Intel HD Graphics 4600 can be utilized in conjunction with the GeForce GTX 670 when using the Lucid Technology. What’s great about using both graphics technologies in the Alienware X51 R2 with Lucid is the ability to use Intel features like Quick Sync that are exclusive to the Intel graphics. 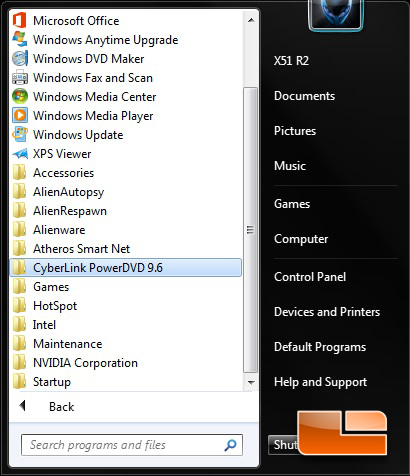 One thing that has been a concern in the past is the amount of bloatware that has come in prebuilt systems like the Alienware X51 R2. I was happy to see that there wasn’t an excessive amount of software that came pre-installed. Aside from the Alienware utilities like AlienAutopsy and AlienRespawn, we have a trial version of Microsoft Office and CyberLink PowerDVD 9.6. 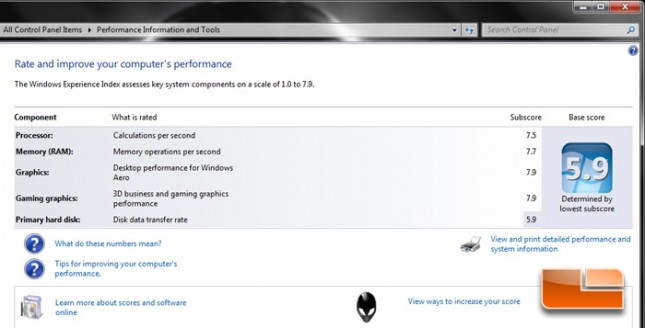 The Window Experience Index is by no means the end all benchmark. It does give us an insight into what may be the weak link in the chain. In the case of the Alienware X51 R2, everything was pretty solid. The Intel Core i5-4430 scored 7.5, the Samsung 8GB 1600MHz memory kit scored 7.7, the NVIDIA GeForce GTX 670 scored 7.9, all very solid scores. The weak link was the primary hard disk. The Seagate Barracuda 2TB drive is a great drive, but it scored only 5.9 out of a maximum of 7.9, the WEI is only as high as the lowest score which means that the Windows Experience Index for the Alienware X51 R2 is only 5.9.