I did some testing with multiple fans to see how the Touch-2000 fared. To test, I utilized the fans listed where each fan had unrestricted airflow.

I had a few interesting results. First, the Panaflo did not register any speed at all on the display but rather blinked zeros instead even though it was properly connected and had the necessary speed sensor wire. The fan ran at full speed and was not adjustable. It’s within spec in regards to power so I don’t really have an explanation for the result. Second, each fan would display an RPM speed that bounced between the set speed and 100RPM’s lower. This was very consistent no matter at what speed I set each. AeroCool does say in the manual that the Touch-2000 has a tolerance of +/- 100RPM and what I found reinforces this statement. Not a big deal really as I think most people would typically throttle down fans to reduce noise and raise it back up to increase cooling performance instead of trying to hit a specific RPM target. The one exception to this was the Sycthe S-Flex fan which never showed the top RPM speed of 1600 but rather 1500. Again, not a big deal as you know it’s at its max or min because the numbers stop rising and falling when the + or - icons are hit. 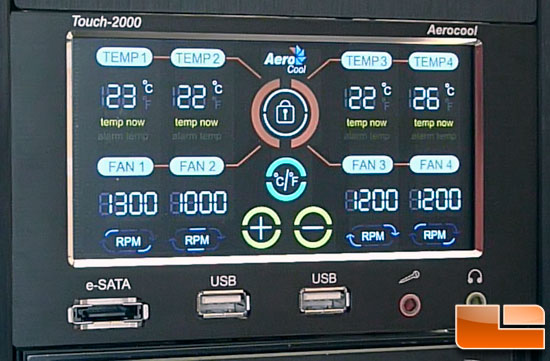 For the testing the temperature probes, I used a Fluke 62 Mini IR thermometer to validate the readings reported by the Touch-2000. In all my tests, I found the probes to be very accurate and in cases where the reading wavered, I recorded the high/low temps. The results achieved are in the following table:

*The reading with the IR thermometer was taken directly on the probe.