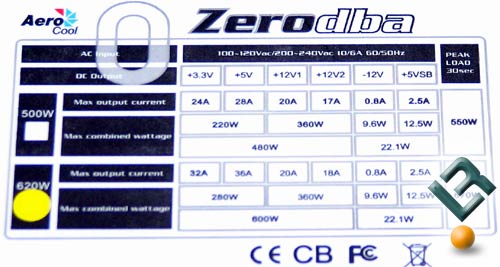 Here are the numbers that matter the most. Compared to the ratings I have seen for other PSUs in this range, I’d say this power supply offers one of the better Max Load ratings I’ve seen! With 30A on the +12v rails, this PSU will be able to run a SLi or Crossfire setup with some room to grow! Since high-end video cards are becoming the most power hungry device of the computer, having a PSU that will support the latest hardware with stability is very important.

The test system used for this review was made up by the listed components. We used a voltmeter to measure the 3.3, 5.0, and 12.0 (1 & 2) volt rails. For the idle reading, we had the system sitting on the desktop with no other programs running. To measure the load reading, we ran two instances of Folding (for team 38296) in order to bring our Hyper-Threaded processor to full load.

Here we see first hand the benefit of using an over-600W PSU with solid rails. The AeroCool 620W PSU showed very little variance between Idle and Load measurements with a Voltmeter. The greatest difference was on the 12V2 rail and it was only 0.03 volts! Small variances between idle and load readings shows signs of a very stable and solid PSU.