If you are looking for an NVMe SSD with RGB lighting the addlink X70 RGB SSD series might be just what you are looking for. It features an impressive looking diamond-cut RGB top plate that ensures your build will stand out from the crowd. Performance also shouldn’t be an issue for this PCIe Gen 3.0 x4 drive as it was built to deliver!

Under the hood you’ll find the Phison E12 controller paired with KIOXIA 64-Layer BiCS3 TLC NAND FLash memory. This combination is capable of delivering up to 3,500 MB/s read and 3,000 MB/s write speeds when it comes to sequential performance. Random 4K performance is also impressive at 510K/500K IOPS for Read/Write operations. 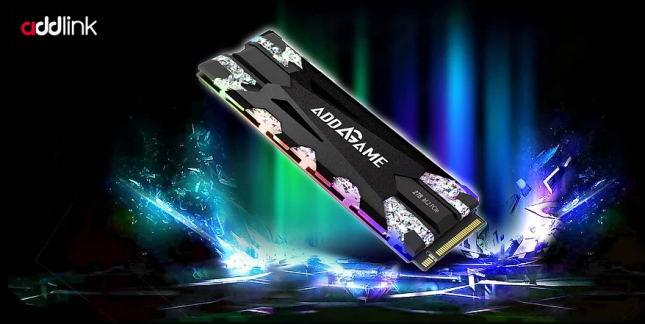 The addgame X70 is addlinks gaming series SSD and is available in 256GB, 512GB, 1TB and 2TB capacities. Performance is dependent on what capacity drive that you purchase, so we tossed together the table below that contains all the key data points that should be of interest.

As you can see the overall performance of the 256GB drive is significantly lower than the others, so we’d really only recommend going with the larger 512GB and larger capacities. The addlink X70 1TB and 2TB drives have virtually identical performance specifications. 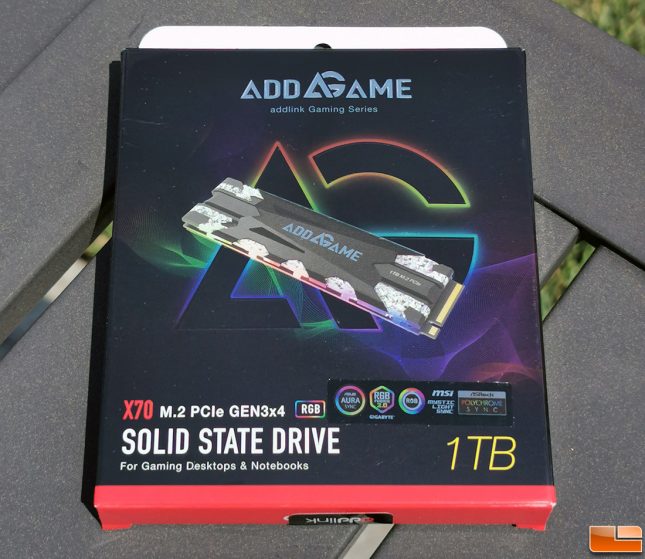 addlink sent over the addgame X70 1TB RGB NBMe SSD for us to test on our AMD Ryzen X570 platform. The drive comes in full color packaging and clearly states that it is compatible with RGB lighting software from ASUS, Gigabyte, MSI and ASRock. So, you have full control over the ten RGB LEDs that line the two outer edges of the SSD.

The box mentions that this is for gaming desktops and notebooks, but it would be absolutely pointless to buy this drive for a notebook. You are paying a premium for the RGB lighting and it is also thicker than a normal single-sided SSD. At 9.1mm thick, this is the thickest NVMe drive that we have ever tested.

The reason it happens to be so thick is due to the fact that is fairly thick heat spreader that includes some added bling for the RGB lighting. Double-sided thermal tape is used to hold the heat spread to the drive, so it is not clipped or glued down.

You’ll find a total of four TLC NAND Flash (BiCS3) packages on the addlink X70 with two on the front and two on the back. There are also two 512MB SKhynix DRAM cache chips on each side that make up the drives 1GB of dedicated DRAM for the controller to access.

Here is a X70 addGame SSD promotional video that addlink released with the introduction of the drive series.

Let’s take a look at the test system and get to the addlink X70 RGB SSD benchmarks!