All tests were performed on a fresh and up-to-date install of Windows 8.1 Pro x64 with no other applications running. Synthetic Benchmarks were run with the OS loaded on a Seagate 600 240GB SSD. Power saving modes, sleep and hibernation are all disabled and all components were set to their default/optimized speeds in the BIOS (1304) and are listed below. 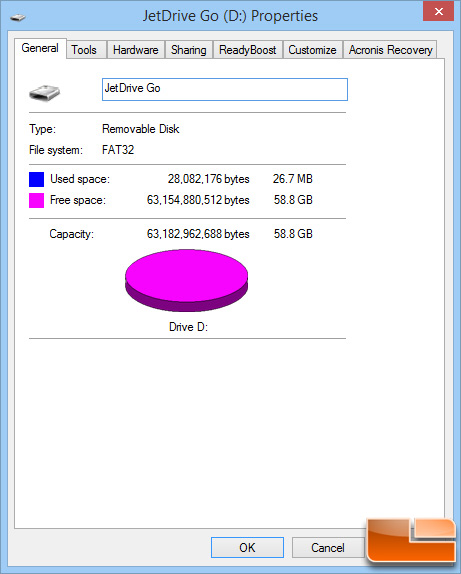 As usual, the capacity reflected in Windows is slightly lower than that of the advertised capacity largely due the Windows expressing the capacity in Gibibytes (GiB) where 1,073,741,824 bytes = 1 Gib which is the computer binary measure. What’s always used in “real world” speak is almost always expressed in Gigabytes (GB ) where 1GB = 1,000,000,000 bytes) as it’s a more human friendly decimal measure. All in all, there are 58.8GiB addressable by the user in the 64GB Transcend JetDrive Go 300 drive. 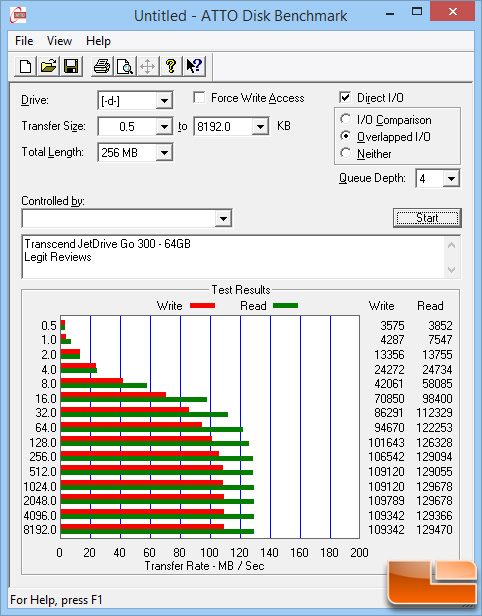 On the ATTO benchmark, we generally get the best case performance scenario from flash storage. On the USB 3.1 interface the writes maxed out to nearly 110MB/s and the reads hit just under 130MB/s which is right at the specified data transfer speed in the specifications though the specs don’t explicitly indicate whether this is for reads or writes. Not hard to guess which they chose. 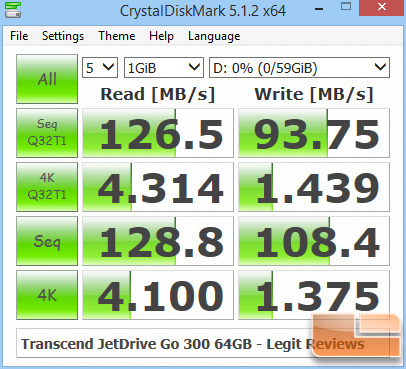 CrystalDiskMark is usually a little more demanding on the hardware and thus we usually see performance drop as compared to ATTO since it uses a mix of compressible, incompressible data. Indeed, we did see a small drop in max read performance at 126.5MB/s and writes suffered a little more, down to 93.75MB/s but overall very close to where Transcend says it should be per the specifications.