Thermaltake is adding to the RGB craze with its own multicolor case LED lighting kit the Lumi Color 256C. Though we’re seen RGB lighting being increasingly used within the past year and a half now even motherboards and video cards have them, amusingly RGB LED strips for computer cases have been around for much longer. The first NZXT HUE launched nearly four years ago well ahead of the trend, but today we’re looking at Thermaltake’s new head-on challenger. 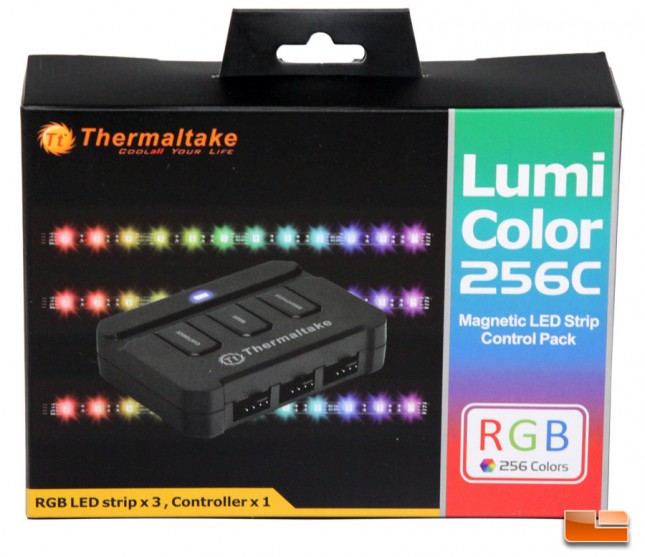 Besides the colors of the lights, what also makes the Thermaltake Lumi Color 256C is the magnetic mounting which makes it convenient to mount and reposition the LED strips inside a steel desktop computer case. Experimentation is valuable for entry-level case modding and the magnets embedded into the strips are a big quality of life improvement over the 3M tape which by the way is included with the Lumi Color 256C. We’re about to see if all this is worth $44.99 (Amazon.) 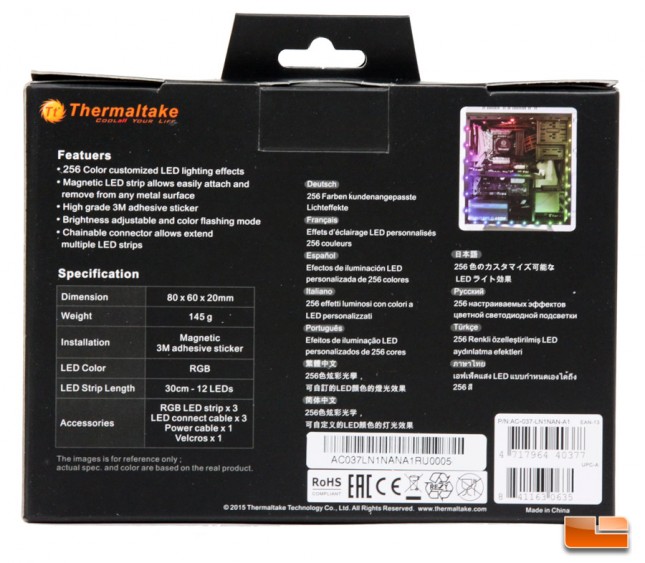 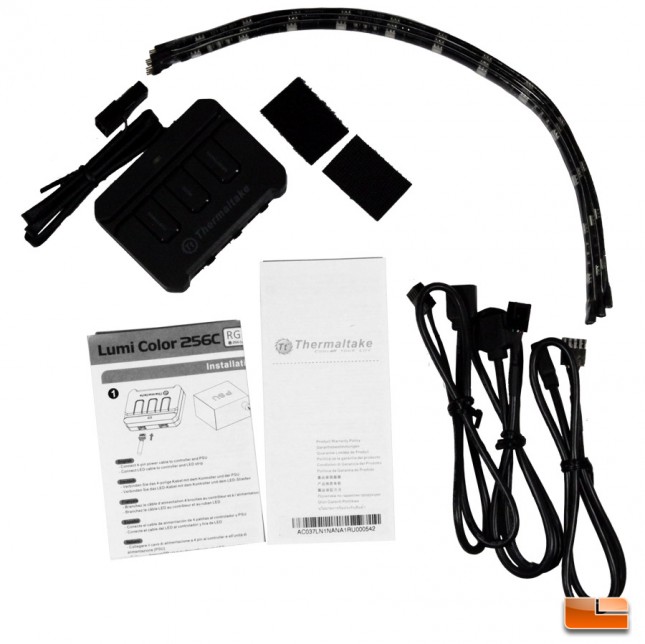 After looking at the features and specifications printed on the back of the box, we open it up and do indeed see a set of three 30 cm LED strips clinging to each other with the embedded magnets, the power cables, a Velcro strip set for the control module, and the control module itself. We also have warranty information and the user guide which confirms that the light effect printed on the graphic on the front of the box is not possible. The Lumi Color 256C controls all the LEDs on a single channel.

Each 30 cm strip has 12 RGB LEDs and magnets spaced along the length. 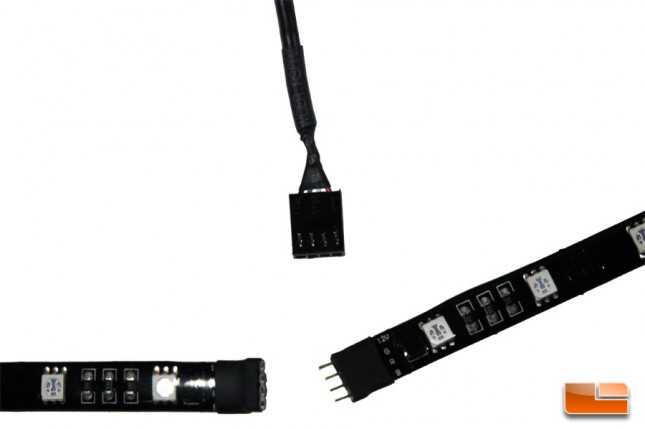 At least one strip must be powered from a cable connected to the control module. The rest can also be connected to the module or daisy chained to another LED strip. The strips and connectors must be connected in the correct direction as the four pins each have individual functions. Arrows on the connectors direct the correct orientation needed to properly plug the strips. In the picture above, the strip on the right has the pinout labeling visible which are 12V, G, R, and B. 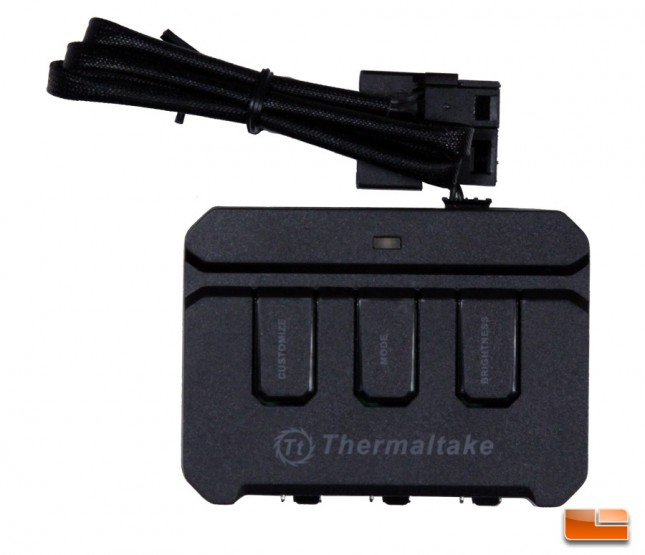 The control module is a compact box measuring 3.1 x 2.3 x 0.8 inches / 80 x 60 x 20mm that powers the LED strips and has three buttons for changing the light color. We will run down the functions of the buttons from right to left.

Brightness toggles brightness levels and pressing the button for three seconds powers the module on or off. Pressing Mode quickly toggles between seven steady colors white, red, yellow, green, cyan, blue, and purple and pressing Mode for three seconds triggers a flash effect that turns the lights on and off while cycling through those seven colors. Pressing Customize triggers a rolling RGB effect where the lights for the most part transition smoothly through 256 colors and pressing this button again will pause and remain steady on the current color until Customize is pressed again. 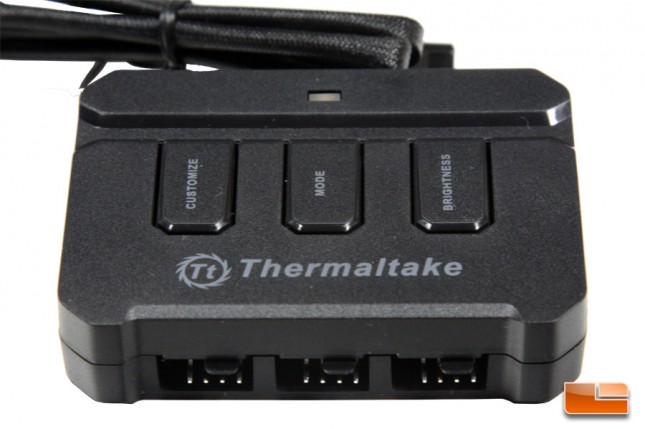 Up to three RGB LED strips can be directly connected to the control module. 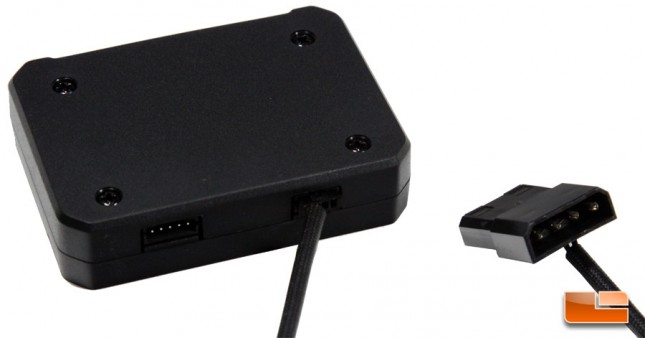 The control module connects to the computer power supply with a Molex connector.

We now have everything powered up and are soon ready to install the Lumi Color 256C into our desktop computers. These LEDs are very bright when we looked at them head on. 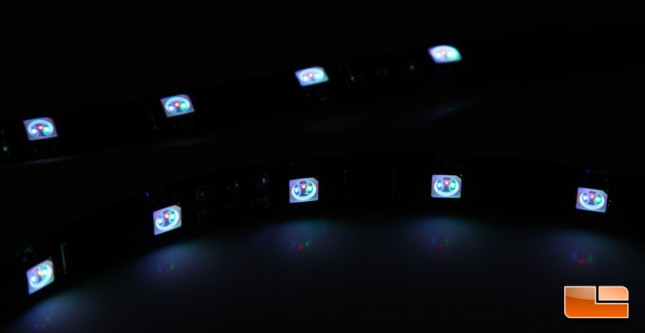 Here we show blue, red, and green colors that can be lit in various combinations to give one of 256 colors. Also notice the beam formation isn’t very wide which made it so that we got the best result with the strips facing straight at the target. Next up, we share how that looks inside a computer case.