Our experience with the SteelSeries Rival mouse was very positive, but there are some minor concerns. Our first criticism is that the mouse nameplate is an unneeded gimmick. This usefulness of this feature is overstated for a multitude of reasons, most of which should be obvious. Realistically, it is rare that others are going to care about the words printed onto a computer mouse especially when they’re so small. More often the mouse will remain plugged into the computer at home than would it be shown off as a showpiece. Additionally, few gamers have a 3D printer or know where to find a 3D printing service in order to make a custom Rival mouse nameplate. While the customizable nameplate was very likely to be inexpensive to implement on the Rival, it is also unnecessary. Amongst the other two other concerns encountered was that we were able to scratch the textured matte coating with a hard object. This is not exclusive to the Rival and any mouse that uses this surface coating is at risk to having the pristine finish scratched. Lastly, the rainbow Colorshift LED color profile isn’t fluid despite being the only lighting profile that changes colors along the entire color spectrum.

Nitpicking aside, the Rival does just about everything else right. The mouse remained comfortable to use after continuous hours of gaming whether that involved thrashing the mouse around in shooters or clocking several hundred clicks-per-minute in strategy games. Furthermore, the Rival was great to use even for tedious precision mouse work for such applications as quick graphic design projects. The mouse buttons are also praiseworthy. Every press gave certainty to our actions with a firm tactile click. A real surprise was that this tactility was also found on the side thumb buttons, something which we don’t often encounter with other gaming mice. To clarify, these buttons are made of large hard plastic which is easy to leverage. Additionally, the thumb buttons are accessible to use, but also positioned so that they aren’t at risk of being accidentally pressed. The scroll wheel has no surprises, but it does perform to expectations. SteelSeries has settled upon a right-handed ergonomic design that works. 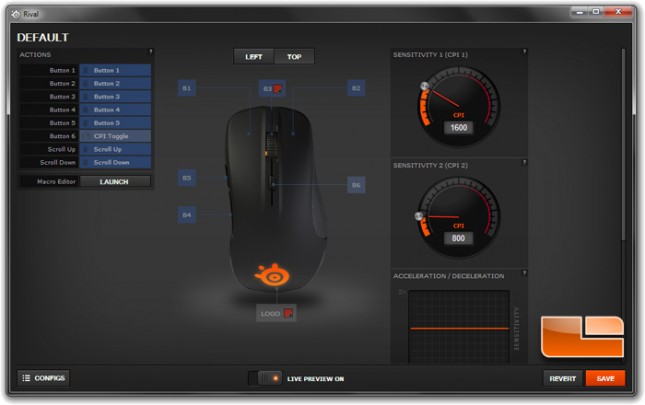 SteelSeries Engine 3.0 is very complete as far as mouse control panels go. A wide variety of settings and macros are available and intuitive to set up. The program is not without its various and unpredictable bugs, but we’ve noticed SteelSeries release frequent updates ever since we first used it with the Siberia Elite headset a few months ago. It’s great to see this much attention given for a peripheral control panel. 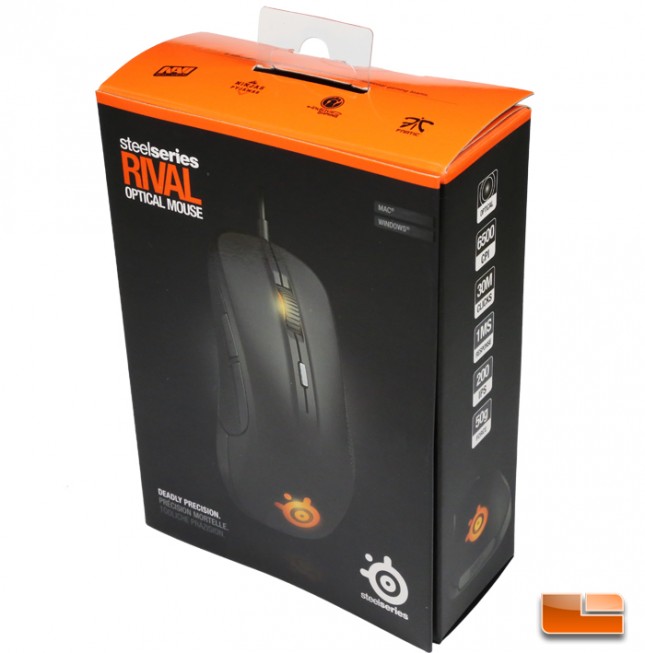 For $54.99 shipped on Amazon, the Rival’s price puts is square in the pack of other top $50-60 mice such as the Logitech G500s, Razer Deathadder, and CM Storm Havoc. That’s some big competition, but the SteelSeries Rival holds it ground with its own set of comparable specifications, a well thought out ergonomic design, and a set of fun features. Ultimately, this mouse deserves our recommendation.

Legit Bottom Line: An ergonomic design that works and solid features lend to the SteelSeries Rival’s many strengths as a gaming mouse.