Using the S.M.A.R.T. temperature sensor we found the Silicon Power 1TB drive had a minimum temperature 0f 39C, a maximum temperature of 82C and an average of 44C inside our test system with the tempered glass panel on during our period of testing. We recently reviewed the Patriot Viper VP4100 1TB drive that is based on the same Phison E16 reference design with a heatsink and it topped out at 67C versus the 82C we see here.

That said, the average temperature on the Silicon Power US70 1TB drive was 1C higher. If you are concerned about temperatures we’ve found a heatsink will help with the maximum temps for general use, but doesn’t dramatically change the performance of the drive by any means. The exception to this is if you are doing very large file transfers (over 100GB) and do them often. 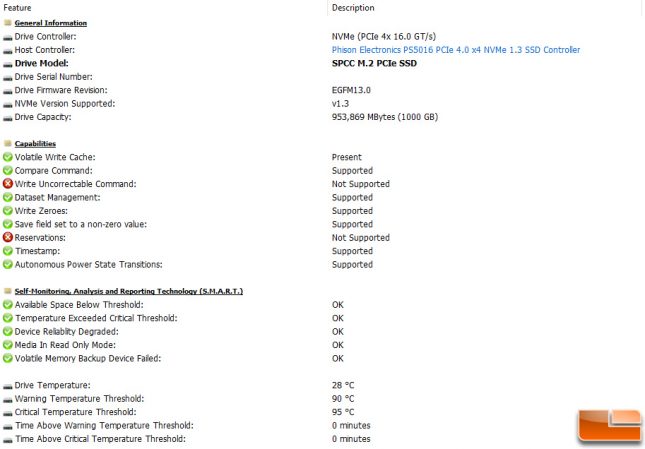 The Silicon Power US70 is a very appealing drive right now as it is the lowest priced PCIe Gen4x4 drive on the market that is based on Phison’s E16 controller. It is really exciting to see PCIe Gen4 SSDs under the $0.15 per GB price point in 2020 without rebates. If you are building a new AMD Ryzen system and using the B550 or X570 chipset for your motherboard, a drive series like the US70 is perfect. If you are buying a new motherboard you might as well use the features it has!

We were able to reach the drive top rated read speed of 5,000 MB/s and write speed of 4,200 MB/s write speed in CrystalDiskMark. Our drive was tested with firmware v13.0 for the Phison E16 controller and we saw solid-performance across our performance tests.

When it comes to pricing the Silicon Power US70 1TB model that we reviewed here today can be picked up for $147.99 shipped over at Amazon. This is the lowest price that we’ve seen for a drive based on the Phison E16 reference design. In fact, the only PCIe Gen4 drive on the market right now is the ADATA XPG GAMMIX S50 Lite 1TB at $139.99 shipped over at Amazon. The S50 Lite 1TB is in our performance charts and the SP US70 1TB clearly offers superior performance and is well worth the extra eight bucks.

Silicon Power’s US70 comes backed by a 5-year warranty and the 1,800 TBW endurance rating is about as good as you are going to get on a 1TB drive. Very few people are doing a complete drive write per day over five years, so this drive should be a premium model that will likely last the length of your PC build.

This drive will get you 5 GB/s speeds and a 5-year warranty without breaking the bank!

Legit Bottom Line: The Silicon Power US70 delivers the best bang for the buck when it comes to PCIe Gen4x4 drives at this point in time!