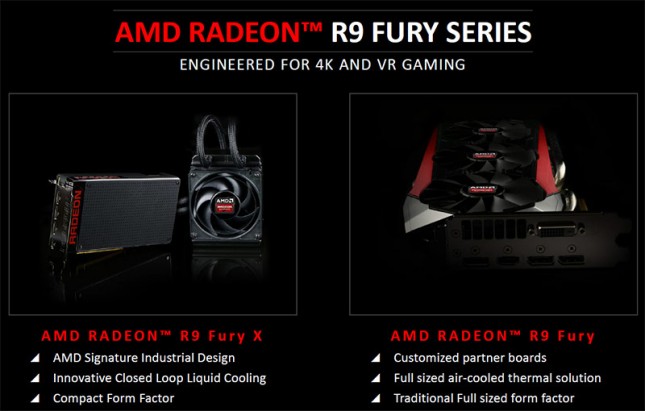 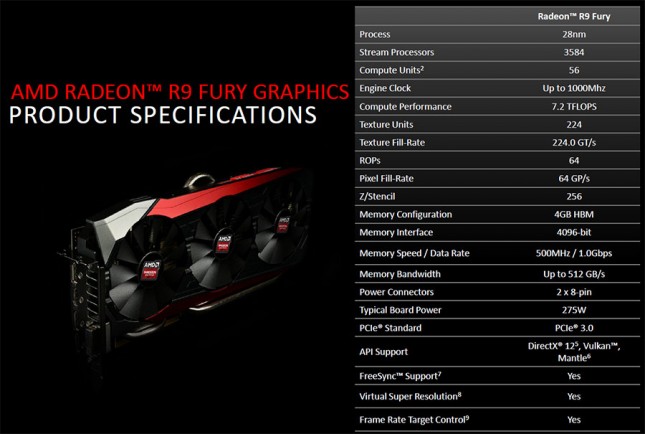 The fully enabled AMD Fiji GPU features 4096 stream processors, 256 texture units and 64 ROPs  thanks to the 8.9 billion transistors  used to create this GPU.  It is currently the only GPU that utilizes HBM Gen 1 technology from SKHynix and the card has four 1GB memory stacks located around the GPU die on an interposer. The AMD Radeon R9 Fury X is clocked at 1050MHz on the core and 500MHz on the HBM, which is good for 8.6 TFLOPS of power. The 4GB of HBM1 operates on a very wide 4096-bit memory interface and the 500MHz clock speed allows for up to 512 GB/s of memory bandwidth. For the AMD Radeon R9 Fury we see that AMD reduced the number of stream processors down to 3584, 224 texture units and kept the ROPs at 64. AMD also lowered the core clock speed down to 1000MHz, but left the 4GB of HBM memory untouched at 500MHz (1000MHz effective). The TDP is the same as the Radeon R9 Fury X at 275W and there are two 8-pin VGA power connectors on the board. Most of the initial AMD Radeon R9 Fury video cards will be based on the Radeon R9 Fury X card, but most AIB’s will be coming out with their own PCB designs later this year. AMD also tweaked the software a bit and added a thermal limiter to throttle the GPU if it gets too hot since the vast majority of these cards will not be available with water cooling. 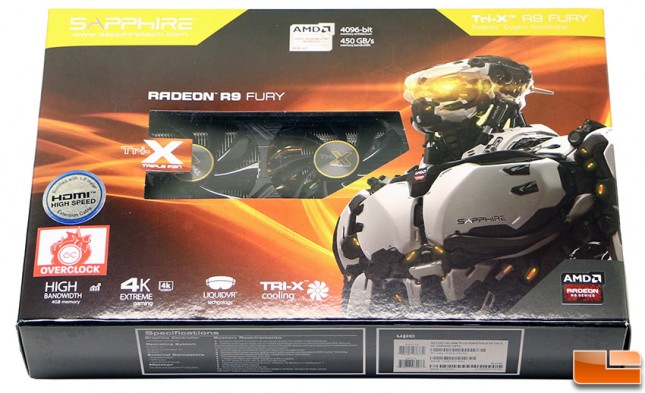 Our friends over at Sapphire hooked us up with the Sapphire Radeon R9 Fury Tri-X OC video card for this launch. The number of cards was very limited for this launch and we actually drove to meet Sapphire and picked up a card for testing that just came back from another site on June 9th. By the time we got the card on the test bench there was less than 16 hours before the embargo lifted, so that is why this review is posted up a little later in the day than usual. As soon as we are done we are packing the card back up and it’s out the door on Monday. 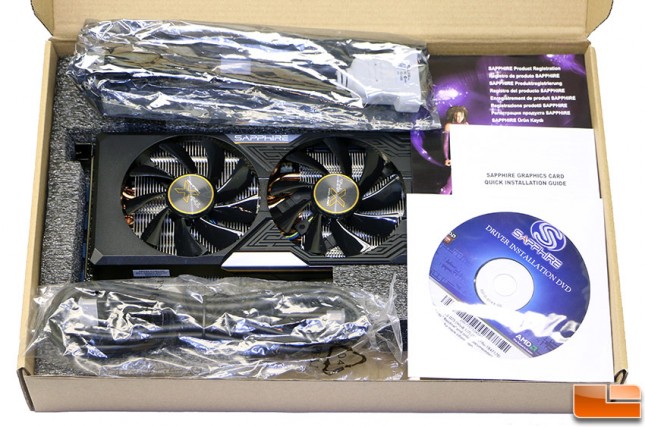 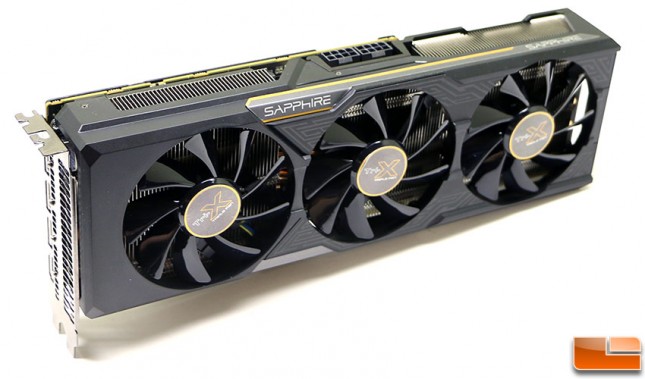 The Sapphire R9 Fury Tri-X OC  uses the AMD Radeon R9 Fury X reference PCB, so the black PCB is only 194mm in length or 7.64-inches in length. The Sapphire Tri-X GPU cooler is massive and puts the overall length of this card at 12.1-inches! 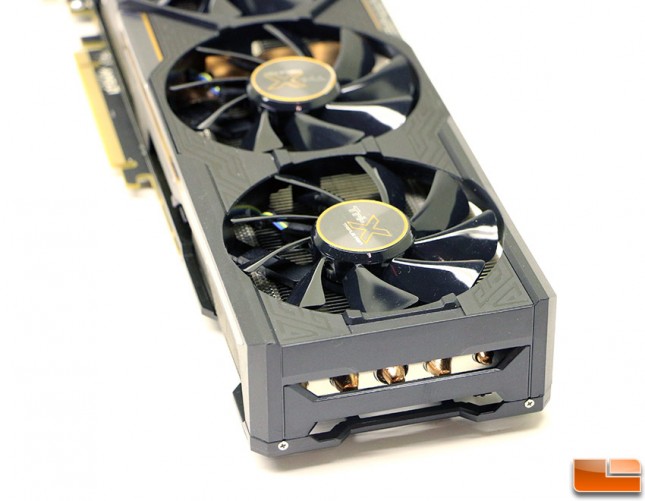 Sapphire designed this card to achieve maximum performance within a target temperature of 75C and in gaming situations the cards fans often run at 1200 RPM for less than 25 dB.

On the back of the card you can see that Sapphire put a nice backplate on this model and you can also see that the cooling fins extend well past the end of the card. 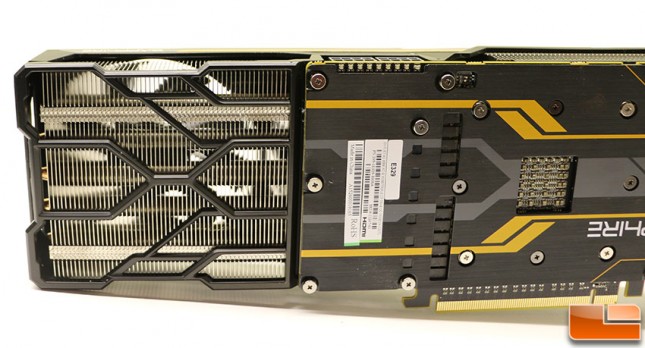 We’ve never seen a video cards GPU cooler extend this far beyond the end of a PCB, but if it keeps the card cool and keeps the noise down it likely won’t be a deal breaker for anyone. 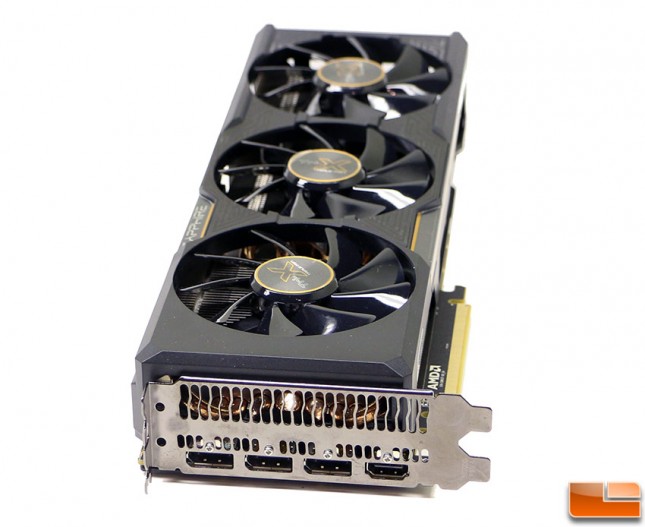 The Sapphire Radeon R9 Fury 4GB card  features three DisplayPort 1.2a connectors and one HDMI 1.4 connector when it comes to display options, which is the AMD reference video output configuration. No DVI will be a concern to some, but Sapphire included a DP-to-DVI adapter in the box! Also notice that this card is thicker than a standard dual-slot design and is considered a 2.2 slot card due to the thick Tri-X GPU cooler. 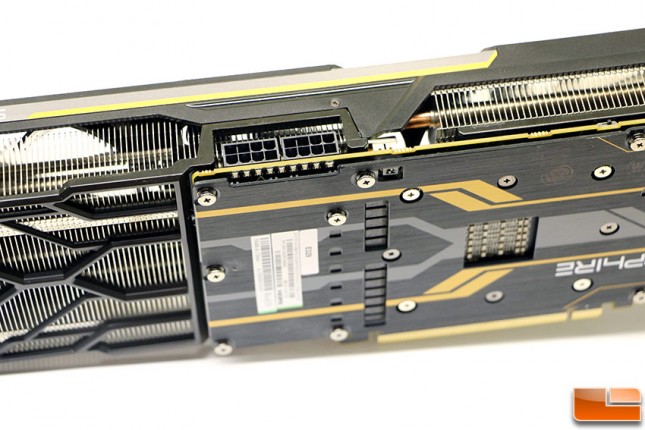 The AMD Radeon R9 Fury is a 275W card that has two 8-pin PCIe power connectors on it. The Radeon R9 Fury has a 6-phase power design that is capable of delivering up to 400 Amps of power to the Fiji GPU. There are two DIP switches on the backplate that allow you to enable or disable the GPU Tach and allows you to change the color of the LEDs between red and blue to go with your case theme better. Eight of the LEDs are for the GPU load level and can be red or blue. The ninth LED light is green and when it is lit up it visually lets you know that the GPU is in AMD’s ZeroCore power mode.

The vBIOS switch on top of the card allows users to switch between two different vBIOS versions. One is set to a 75C temperature target that keeps the power to the GPU limited to 300W and the other version is set for an 80C GPU temperature target and a 350W power limit. The only problem is we have no clue which switch setting is for which vBIOS as in AMD OverDrive the temperature target was at 85C. Sapphire needs to label this switch or put on the box what it does as it is not made clear. We had to contact Sapphire to find out that with the switch in the left position (toward the I/O bracket as shown above) has the card in unlocked mode and the right position is the default locked setting. We tested this card with it in unlocked mode. 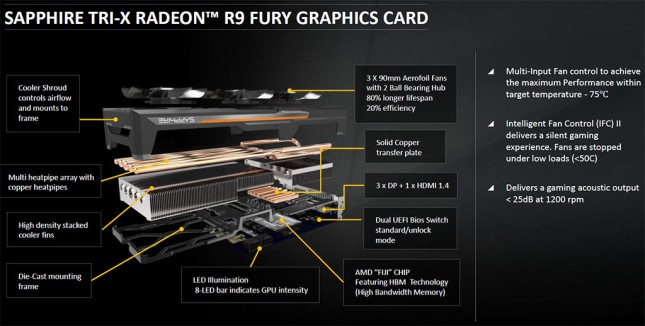 Here is a quick look at the key features of the Sapphire TRI-X Radeon R9 Fury Graphics Card in case we missed something. 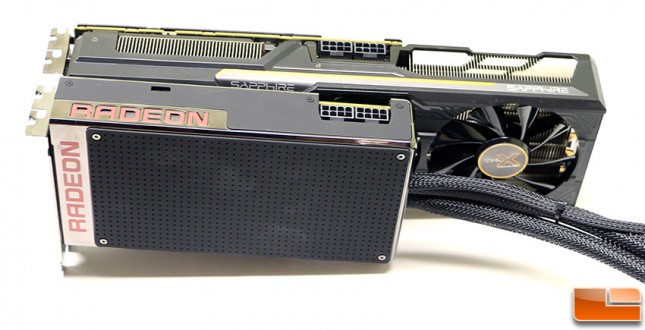 Here is a shot that shows the AMD Radeon R9 Fury X reference card sitting next to the Sapphire Radeon R9 Fury TRI-X OC card to give you an idea of the size difference.