The very first benchmark test that we did on the SanDisk 32GB Extreme Pro UHS-II SDHC memory card was to test the speed differences between a common UHS-I compatible reader and then one of the new SanDisk UHS-II readers. We turned to our trusty Transcend RDF8 USB 3.0 Memory Card Reader (read our review) for some baseline testing and found sequential read/write speeds of 47.8MB/s and 46.1MB/s, respectively. We’ve seen close to 90MB/s on that reader before, so SanDisk wasn’t lying about having low performance on older host devices. we then switched over to the SanDisk Extreme Pro UHS-II SD USB 3.0 card reader/writer that is sold under part number SDDR-329-A46 for $44.95. This is a UHS-II card reader and is said to be the ideal memory card reader for UHS-II U3 SDXC and SDHC cards since it uses the USB 3.0 interface and is a UHS-II host device. As you can see from the screenshots above the SanDisk UHS-II reader was much faster with 239.2MB/s and 202.9MB/s sequential read and write speeds. If you are going to invest in a UHS-II card for faster image and movie file transfers you’ll need to also purchase a proper UHS-II card reader or you might actually get lower performance. 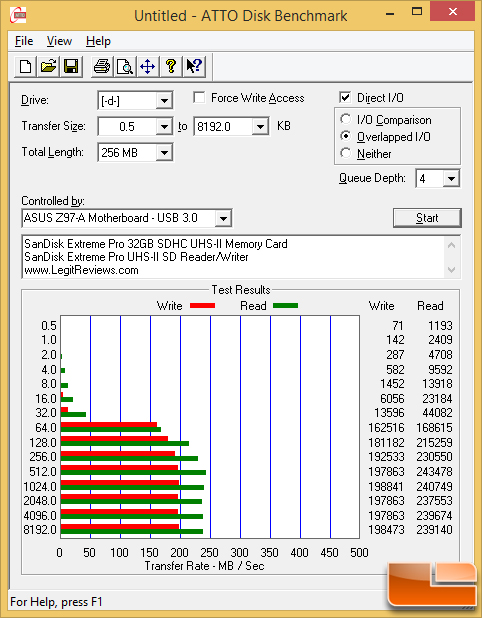 We then ran ATTO v2.47 and found that we were able to get 243.5 MB/s read and 198.8 MB/s write speeds. These are very impressive speeds, but no matter what benchmark we tried, we just couldn’t hit the rated 280MB/s read and 250MB/s write speeds. These tests were done on the just released ASUS Z97-A Motherboard with Windows 8.1 Update 1 and all the latest drivers and firmware. We also tried several other systems that we had in the office and all topped out within +/- 5MB/s of these speeds. 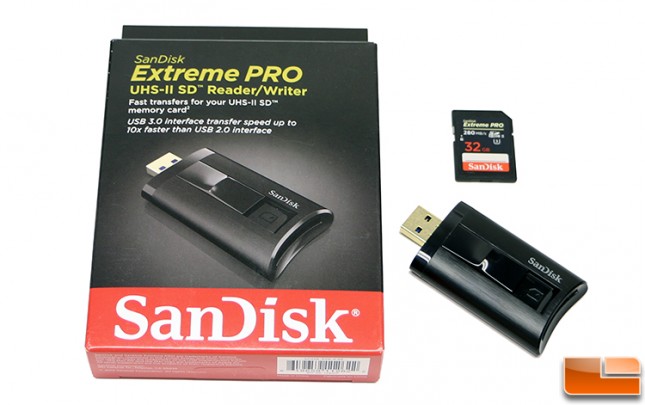 If you are looking for a UHS-II compliant flash card look no further than the SanDisk Extreme Pro UHS-II memory card series. SanDisk’s new cards offer the fastest transfer rates available and are UHS Speed Class 3 (U3) enabled. SanDisk says that this memory card delivers read speeds of up to 280MB/s and write speeds of up to 250MB/s. This card also happens to be U3 speed class rated as well, which means 4K video capture at constant minimum write speeds of 30MB/s is possible. This is important as it means that this card can handle Sony’s XAVC-S 4K codec used on the Sony FDR-AX1 that captures 4K video at 150Mb/s or 18.75MB/s. The 30MB/s minimum sustained write speed on U3 Speed Class products translates to a 240Mb/s data rate, so this card will be up to the task for the most demanding of video cameras.

We were able to get read/write speeds of ~240MB/s read and ~200MB/s write in our testing using common benchmark applications. These are a little lower than the advertised speed ratings, but still represents a gigantic leap forward when it comes to getting data off of and onto the memory card with a USB 3.0 card reader that has a UHS-II supported host. These fast transfer speeds reduce the time required to download movies and images from your camera card, which is a big deal for those that shoot a ton of Full HD content.

The UHS-II interface was first announced in early 2011 and just now are we starting to see both UHS-II memory cards and host devices come to market. The additional row of pins poses a challenge as there are not too many UHS-II products on the market and although UHS-II cards are backwards compatible, they may actually run slower than UHS-I cards and we confirmed that on our UHS-I USB 3.0 card reader. This means that if you wanted to get the speed benefits from a UHS-II card, you’ll need to upgrade your memory card reader as well. There is said to be a proliferation of devices that support UHS-II cards within the next year and that the lack of UHS-II host devices will be quickly resolved.

Most people are finding themselves with increasingly large videos. Who wants to wait hours to move a file. We don’t have any UHS-II cameras here, but we found ourselves using this card to shoot full HD video on our Canon EOS 70D and GO PRO Hero 3+ Black Edition because we could get the videos off the card and onto our PC for editing faster than anything else. If this sounds interesting be sure to take a look at one of these cards and the proper UHS-II card reader.

Where do memory cards go from there? The SD Association might have tripled transfer speeds from UHS-I, but they aren’t slowing down progress on the next progression on SD cards. The SD Association has plans to double UHS-II speeds in the future and further expand the storage capacities. That would mean a speed class for 624MB/s cards and up to 2TB SDXC memory cards. They are also working on Smart microSD cards that have the addition of the Single Wire Protocol (SWP) to support NFC. This will open the door for JAVA smart card that supports hardware security for all types of secure banking transactions such as funds transfer, on-line credit card payment, without typing credit card info, bill pay, auto recharge of the contactless payment or ticket/voucher storage. The future for SD and microSD cards is still looking good!

Legit Bottom Line: The SanDisk 32GB Extreme Pro UHS-II SDHC memory card is the fastest that we have ever tested and if you are looking to speed up your post-processing work, this is the ticket!