Most headsets are not particularly comfortable because ears are usually very sensitive, so having something put pressure on them for long periods of time can start to hurt. This is especially true for the Saitek Cyborg Headset. For people with wider-than-normal ears, this headset puts a spectacular amount of strain on them because the springy metal makes the headset very tight. The foam that goes over your ears is also not thick enough, so the edge of the ear rests basically on the speakers, pictured below, due to a lack of fabric covering the speakers. 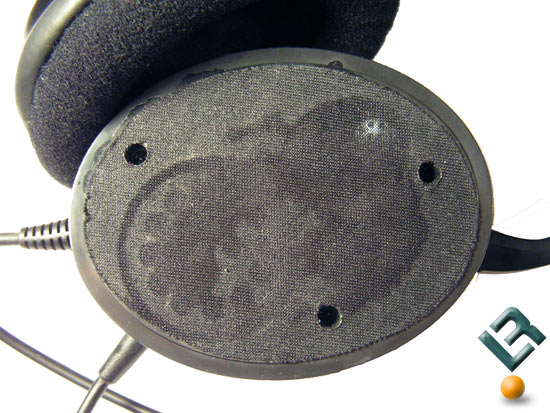 Here you can see there are three speakers per ear piece, each angled to give the illusion of full 5.1 surround sound (when used). You can also see the lack of fabric, as stated above.

One thing that I noticed when in 5.1 mode is that the sound is extremely loud, which is good in areas that are also loud, but the speakers will make it even louder, as they leak sound terribly. For example, I played a fairly quiet song in my room with the door open, and I could hear it clearly at the other end of the hall.

Another thing experienced in 5.1 mode was that while playing a game, there is a very high pitched ringing, which gets louder and more intense the longer you are playing, but as soon as you leave full screen mode to exit the game, it disappears. I don’t really know what causes this interference, but it occurred whenever playing in 5.1 mode, so I had to move over to stereo mode to eliminate it.

Lastly, when changing from 5.1 mode, you will get the error below if playing music, and you must unplug the USB cord, stop the music (or whatever program is currently producing sound) then play it again.

Admittedly, using 5.1 surround sound mode is very cool, as it makes certain games very intense. If it just didn’t always make a ringing sound in games, this would be very handy.

Another major problem that I discovered after using this headset for a while is that the top of the headset has padding which is quite soft, but the metal support is far too thin, so it has a pressure point all the way across where it comes in contact with your head which starts stinging before long.

I used this headset for one Team Fortress 2 match, and during halftime I had to unplug the headset to switch it with my $18 Wal*Mart pair because I was sending some interference through the microphone so no one could hear me, and the high pitched ringing was getting to me. 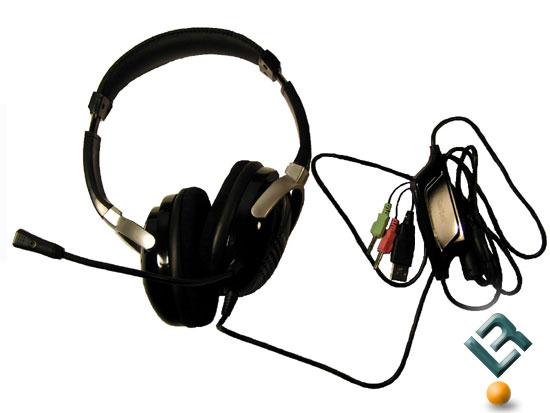 The Saitek Cyborg 5.1 surround sound headset has a very good appearance, but looks may be deceiving as the only upside to this headset is the sound quality and loudness when listening to music or watching movies. The downsides include, but are not limited to: bad Software, too many options for XP and too few for Vista, a very high pitched ringing noise in games which gets progressively louder (it hurts most peoples ears – I asked several random people to try it on and say if it hurt at all, say it hurts after being on for less than 1 minute), it hurts the top of the head, and finally, it is just uncomfortable in general.

With all the problems and trouble this headset gave me, I don’t know how anyone can say it is worth its $80 price tag. I would take my Wal*Mart headset over this if it were the same price or, still yet, if the Saitek were even cheaper because I just can’t leave it on my head for a long time.

Legit Bottom Line: Not everyone will have problems with this headset, but if you know or think your ears are sensitive, just don’t bother with this headset as it is far more trouble for nearly four times the price of a headset that works just as well, if not better, with nearly no hassle at all.