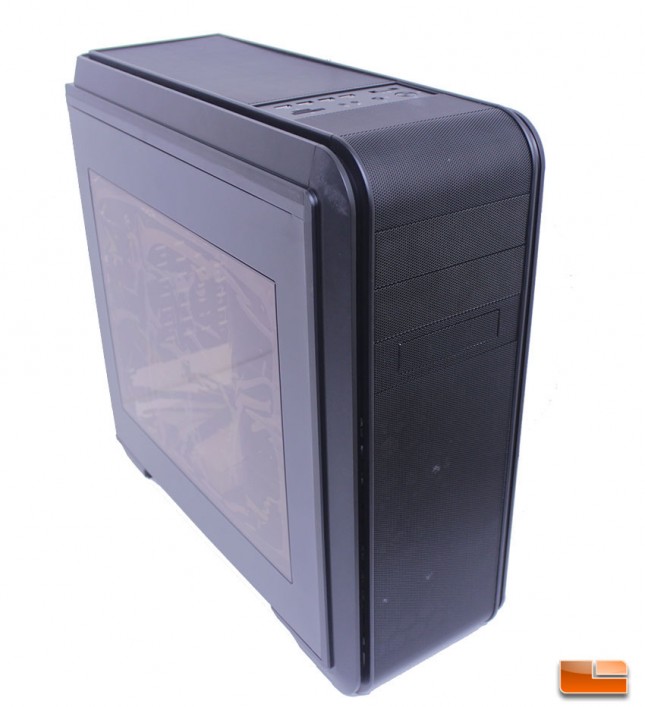 The Viper Z features rounded edges and a lot of mesh, with large plastic panels attached to its SECC frame.  The Viper Z exterior design is very similar to that of the Cooler Master 690 series, which isn’t a bad thing, at all.   The black paint is applied well, though the difference in color between the plastic and metal panels can be noticed.  The Viper Z is void of any Rosewill logos or badges on the exterior, which will appeal to enthusiasts looking to do a clean build.  The Viper Z also has blue lighting effects provided by the two intake fans and top exhaust fan that are installed from the factory.  These fans sit under mesh, which should really give the LED lighting a nice effect.  The rear exhaust fan is standard and doesn’t feature LED lighting. 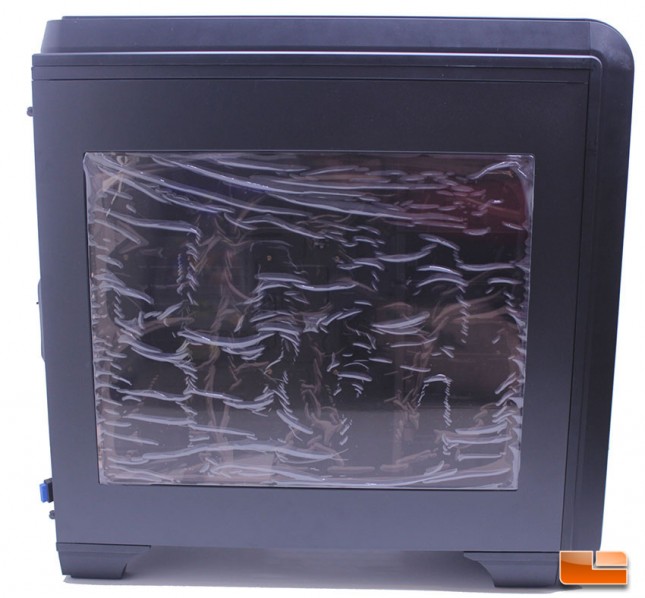 The window on the left side panel is covered with a film on both sides to protect during shipping and takes up a good portion of the panel, which unfortunately causes the panel to flex a bit and lose rigidity.  Not that ours had any issues, but it does cause long term concerns over the panel possibly not staying true to form and fitting perfectly.  As shipped, the panels on the Viper Z all fit well and lined up perfectly with the case frame.  The right side panel is rigid, well built and is straight across, with no indents to assist with cable management. 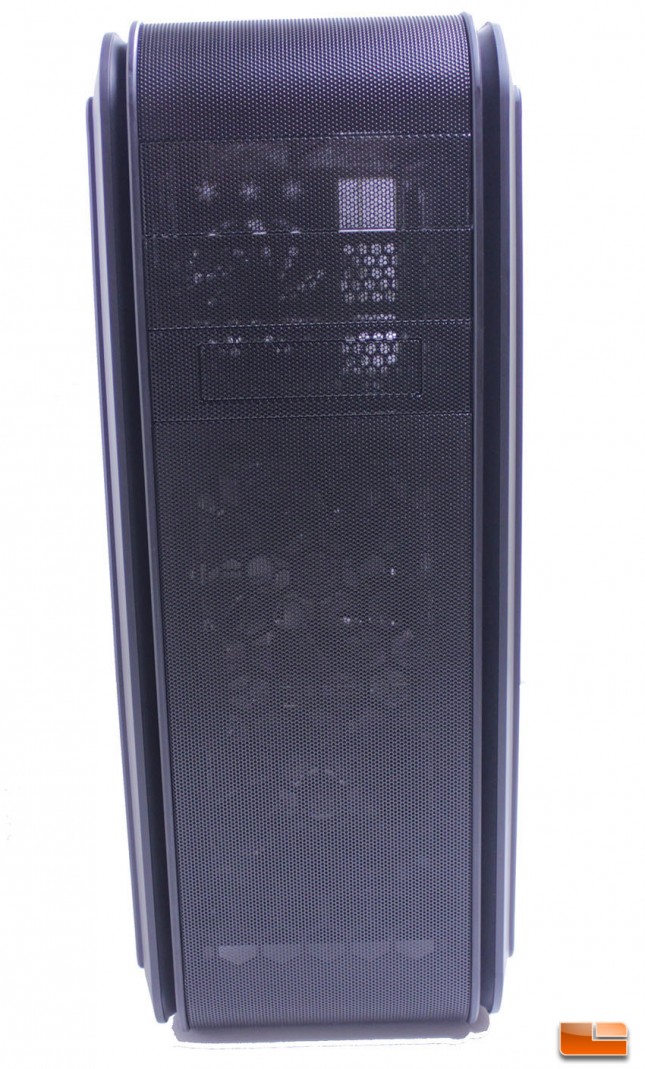 The front panel features a tight mesh that flows across the fascia all the way to the top of the case.  This type of mesh will lend itself a small amount to airflow, though not as well as the more open type of mesh included on cases like the MasterCase 5.  There is also see a small gap between the front panel and sides of the case where unfiltered air can be drawn into the case.  This gap was likely by design to improve airflow, but the lack of filtration here isn’t optimal for users who want to minimize potential dust build up in their system.   You can’t just remove the mesh from the filter to dust from it, the whole panel must be removed.  This makes cleaning the front fan intake area a bit of a chore and far from intuitive.  Rosewill could have made the mesh a separate, removable piece that could be taken off and washed for convenience, as we’ve seen on so many other cases. 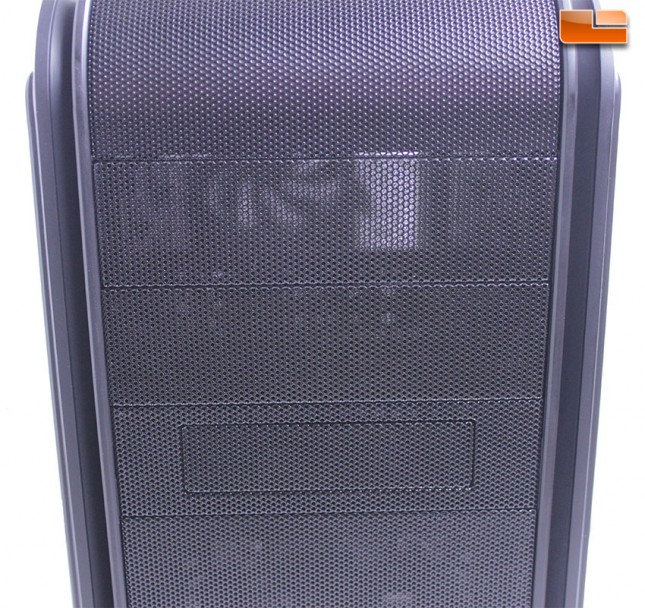 The lowest of the three 5.25″ bays has a cutout in the cover to support 3.5″ devices, such as card readers or *gasp* floppy drives.  With many companies omitting optical drive bays altogether on their cases these days, it’s interesting to see Rosewill supporting 3.5″ drives here.  Rosewill suggests removing the front panel in order to remove the drive bay covers and install drives in the 5.25″ bays. 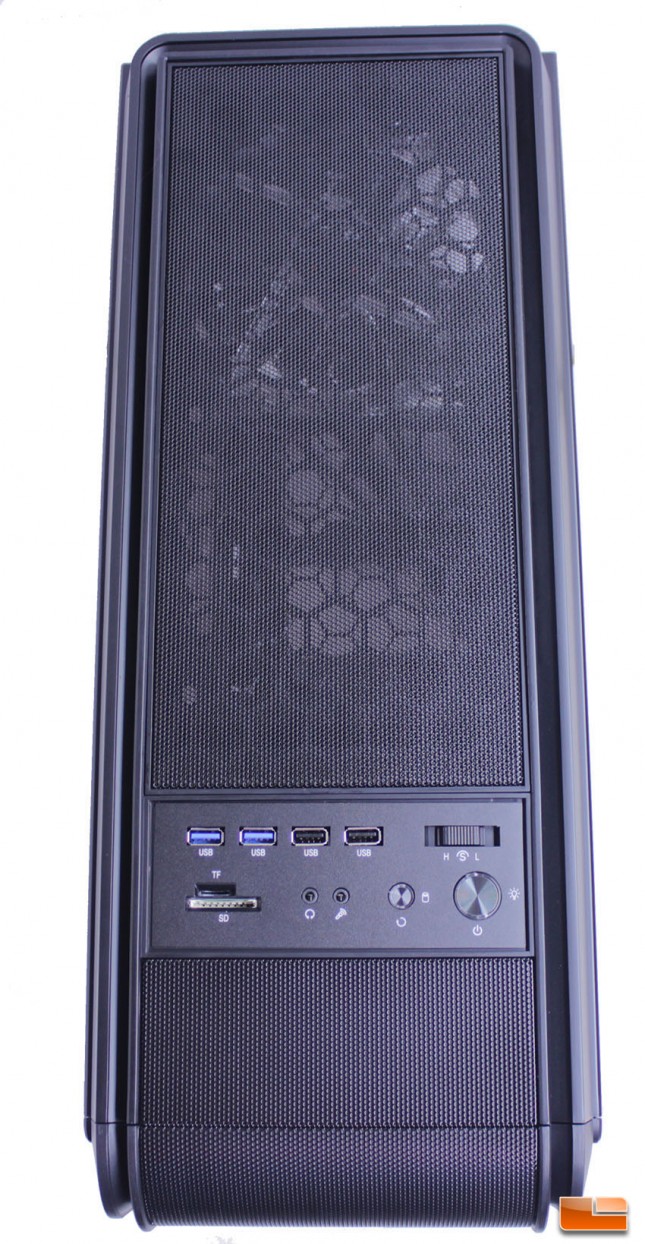 The top panel features the same mesh as the front, which flows very nicely up to the IO panel and then continues to the rear of the case, offering ventilation for the top fans.  The top panel is completely flat, except for where it meets the front panel and there is a slight curve.  The design flows very well and I like the clean, uniform look of the mesh coupled with the metal panels and plastic parts.  The area between the front of the case and the IO panel on the top of the case could have been indented slightly to be used as a storage area for USB devices and such, as we’ve seen on other cases. 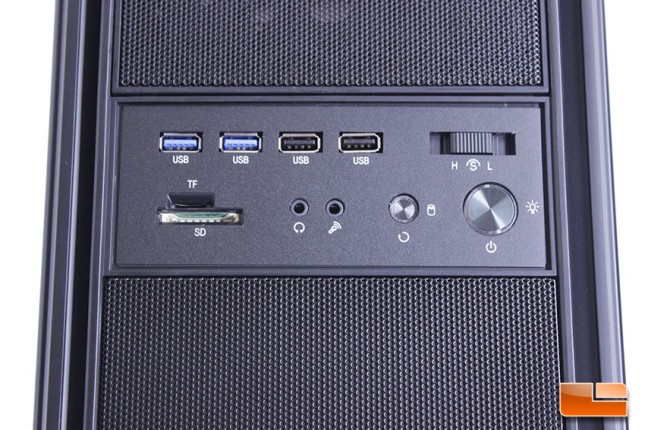 The Viper Z has a very feature-rich IO panel that is more extensive than the ones I’ve seen on more expensive enthusiast cases.  A pair of USB 3.0 ports and USB 2.0 ports in addition to audio jacks are typical and expected, but the Viper Z also has an SD Card/MicroSD card reader that connects to your motherboard via an internal USB header, in addition to a fan controller that is capable of controlling three fans.  The fan controller is capable of running fans at three different speeds, High, Low or Silent,  selected by switch.  A bit confusing is that the stock setting is Silent and will render the fans inoperable.  This may throw some builders off if they aren’t aware of the fan controller setting.  The buttons are all firm and the switch for the fan controller feels well-built and solid.  The power button does illuminate in blue, matching the color scheme of the case LED’s. 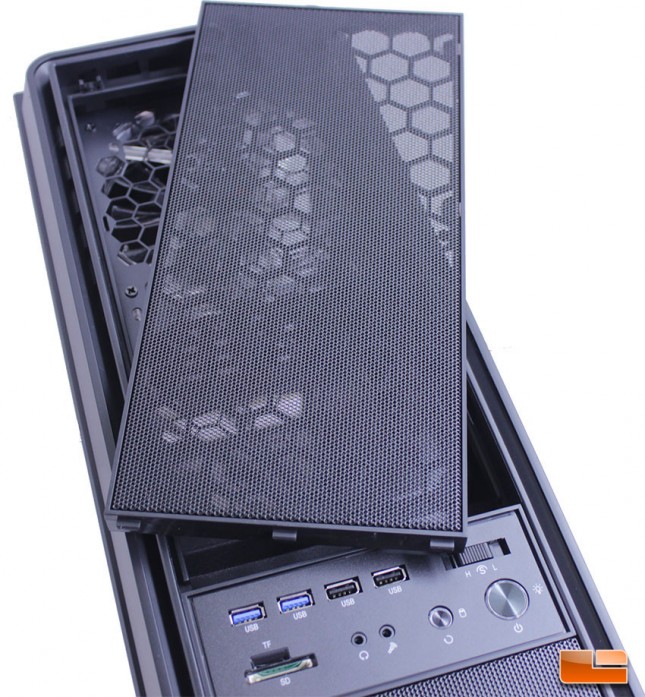 The mesh on the top panel also acts as a filter for dust falling into the top of the case and can easily be removed for cleaning, or to add top panel fans or a radiator, with a simple push to release the clips.  This is a really good mechanism that is easy to use and the clips are solid and well built.  This mesh panel is well made and didn’t give us any concerns over its long term durability or losing shape after multiple removals and installations. 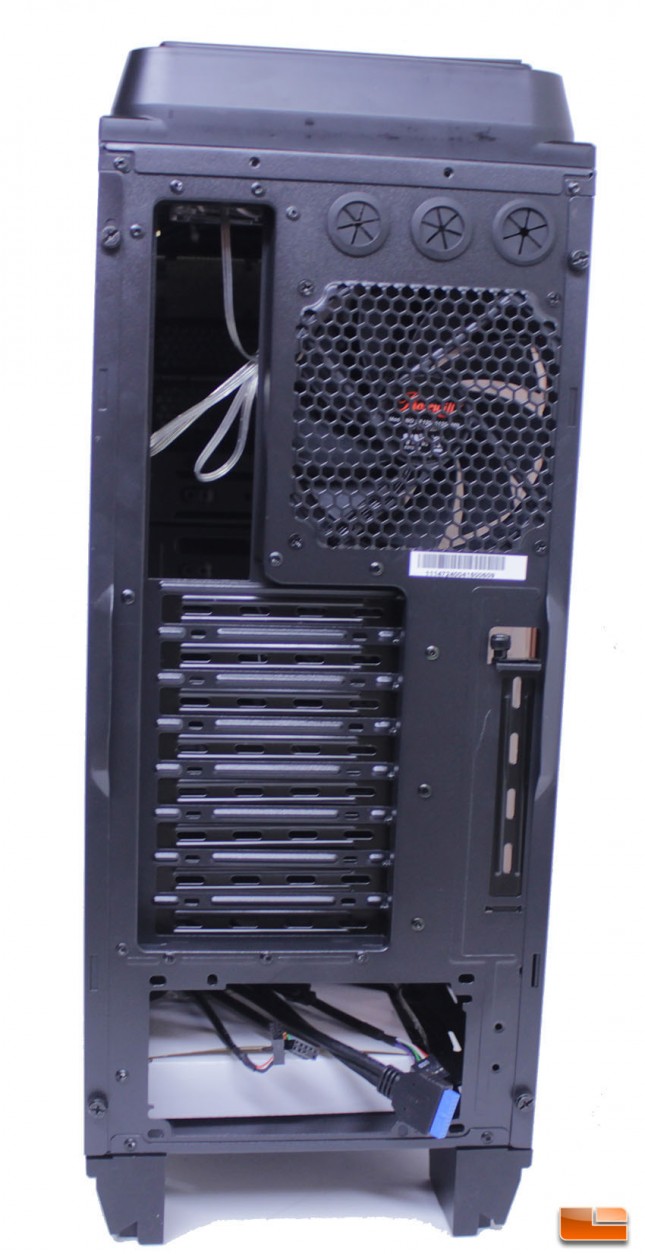 The rear of the Viper Z is a pretty standard affair, though there is a PCI-E expansion area that sits near the right side panel.  This can be used for expansion card installation, or to install an accessory device like an LCD power switch or fan control device.  Proper cutouts for watercooling are included above the exhaust fan location, should users decide they want to use external watercooling with the Viper Z.  The exhaust fan grill is pushed out just slightly from the case to help with finger protection and reduce air turbulence and noise.  Unfortunately, the rear location is limited to 120mm fans, which is a letdown, as 140mm units can typically move more air with less noise signature. 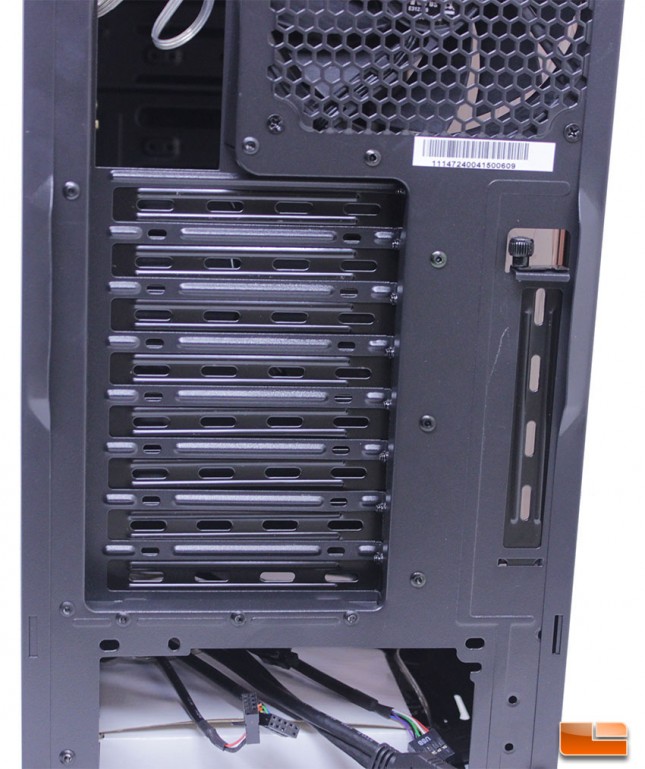 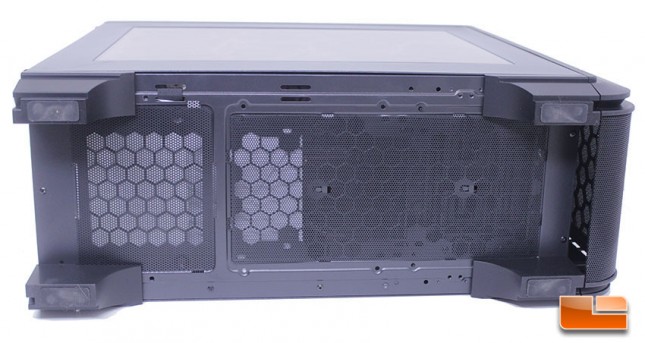 The installed case feet let the Viper Z sit pretty tall, but they actually only extend to meet with the front fascia plastic, which extends quite a bit down past the actual frame of the case.  At about 2″ of clearance, I do feel like the bottom of the Viper Z sits a bit high above the surface its installed on and there isn’t a reason for there to be so much clearance, but it’s not going to hurt anything.  Even if you installed the Viper Z on the shag carpet in your parents 1970’s loft, there’d still be plenty of clearance for air intake underneath, with the Viper Z providing more under-chassis clearance than any other mid-tower case I’ve reviewed to date. 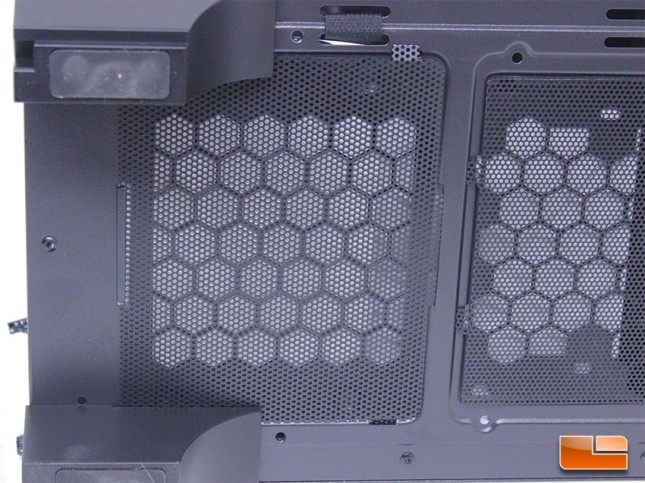 The PSU filter and intake filter for the fans on the bottom of the Viper Z are not easily removable, as they tab into the case.  Removing them requires lifting the case up to access the underside and it’s a pain.  While it’s better than having no filters, Rosewill would have been far better off implementing a filter that is easily removable from the rear of the case.  Also, the open nature of these types of filters mean they won’t do a great job of filtering smaller dust particles, though airflow should be optimal. 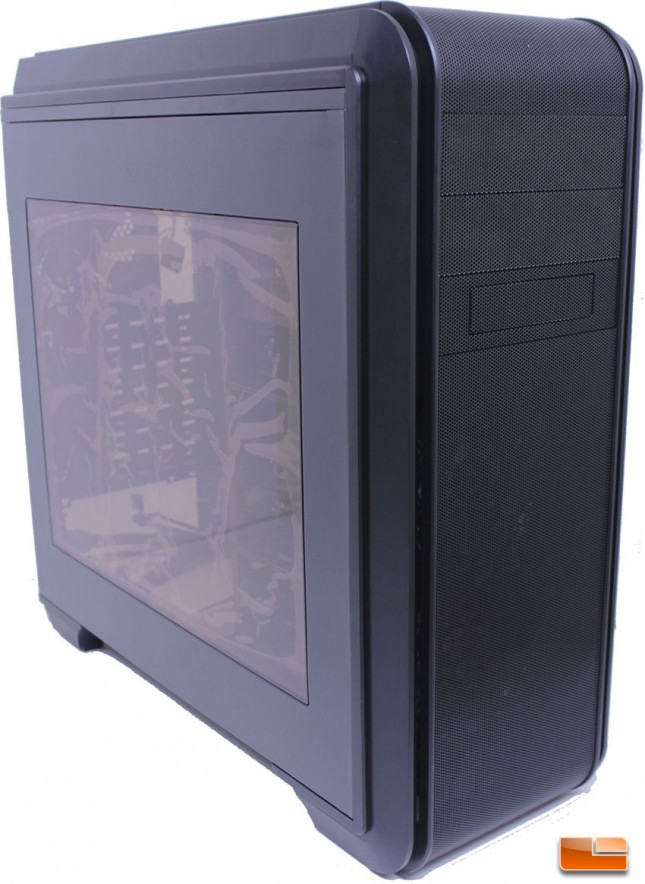 The Rosewill Viper Z has a pretty stylish, solid exterior that I feel is reminiscent of the Cooler Master 690 series, which isn’t a bad thing at all.  The design of the case flows very well, though Rosewill could definitely cut back on their use of plastic, as the front and top panels were huge.  There are some concerns about airflow and the lack of easily removable filters for the PSU and front intake area, but overall, the external features and style of the Viper Z are very appealing.