One of the key features to the Vulcan series are the Titan switches. During the time of this review, the Titan switches are still rather new. They were developed by Roccat to provide gamers with a swift and precise key stroke while still being tactile. I really did enjoy typing with this keyboard as the key switches felt like crispier Cherry MX Brown switches. With a 1.8 mm actuation point and a 3.6 mm travel distance, these Titan switches will register sooner compared to the standard mechanical key switches.

Many manufacturers like to differentiate themselves from the competition by developing proprietary switches for their keyboards. Logitech has their Romer-G switches, Razer with their Orange and Green switches, and now Roccat with their Titan switches. Developing new switches is a great step not only for the company, but for innovation and competition overall. This will ultimately result in affordable prices for the consumers. Surprisingly, the Roccat website also did not specify how many clicks the Titan switch could take. Only time will tell just how long these switches will last before we start seeing any performance or mechanical issues.

Another thing about the Vulcan 100 AIMO were the smaller and lighter key caps. They are 50% lighter and did not take up as much space as a standard key cap. At first, it felt somewhat weird to type on as I was adjusting to the smaller key caps. After a while of using the keyboard, I became more familiar to the feel of the keyboard. 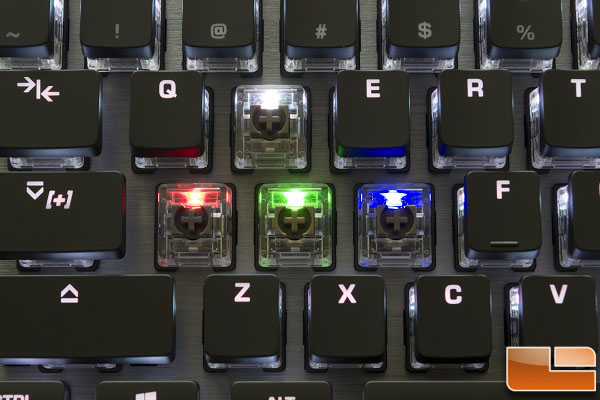 Here is a closer look at some of the key caps. They felt pretty durable, which was surprising because of their smaller size. The stems were also pretty thick, which will provide some durability for long term usage. They were somewhat difficult to pull off the keyboard, but that was because of the thicker stems. 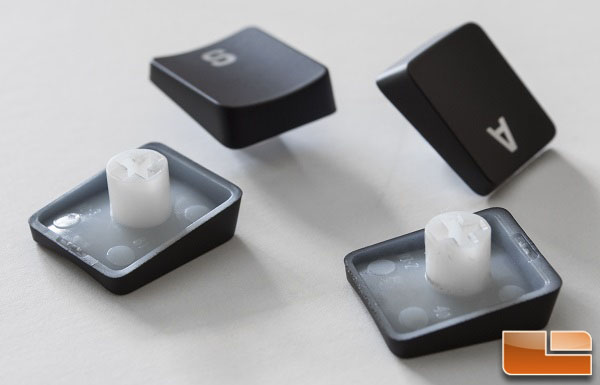 The lighting was very bright on the Vulcan 100 AIMO; probably the brightest keyboard I have ever tested so far. This was mostly due to the fact that the key caps were smaller, which allowed more light from key switches and back plate to reflect towards the user. But unlike standard clear switch housings, the Titan switches have clear projector lenses instead of foggy ones. I was clearly able to see the LEDs in the key switches, so that allowed the LEDs to project nicely onto the key caps.

On a standard keyboard, we would not see the number, caps, or scroll lock indicators in this location. But because the multimedia functions took the space above the number pad, Roccat placed these LED indicators down here instead. In addition to the standard three indicators, there is a fourth one for Game Mode. Pressing Fn and Scroll Lock will enable/disable game mode. With game mode enabled, it will disable the Windows key, enable the six macro buttons to the user, and allow for Easy-Shift[+] functionality by pressing the caps lock key.

With Easy-Shift[+] technology, this allows pre-selected keys to gain access to a secondary function. This is great not only for gaming purposes, but for productivity as well. With game mode enabled while holding down the caps lock key, we can access the secondary functions of a few keys. Secondary functions are customizable through the Swarm software, which opens up many new possibilities. 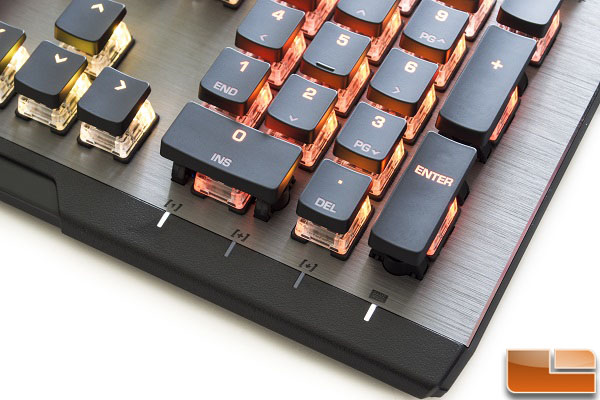 Aside from the keyboard not being able to store lighting and macro functions on the on-board memory, I am happy with the performance of the Vulcan 100 AIMO because of the typing/gaming experience with the Titan switches. Since I want to test the longevity of the Titan switches, this keyboard is currently my everyday driver for software engineering purposes. The crispy brown-like tactile response feels good and sounds great to the ear. So far, the switches have been working perfectly fine without any problems. Roccat did not specify how long these switches will last, so only time can tell how durable they really are.

The Vulcan 100 AIMO looks great with its bright LEDs and aluminum back plate. Its advanced AIMO intelligent lighting system is a mixture of wave, ripple, and other common lighting effects put together for a unique effect that adapts to the keyboard usage. The brightness of the LEDs is due to the clear switch housing, which allows a great amount of light to hit the key caps. I am also very thankful for the scroll wheel as it is a nice touch for making volume and lighting adjustments easier.

With it being priced at $136.98 shipped on Amazon, the Vulcan 100 AIMO is priced closely with the Corsair K70 MK.2 ($139.99). To many people, this is a pretty steep price considering the Corsair alternative does have on-board hardware profile storage, USB pass-through port, and genuine Cherry MX switches. Cherry MX switches have proven to be very reliable over a period of decades, so many people trust them. The Titan switches do feel great to type and game with, but I am still questioning how long they will last. Maybe they might last a decade; who knows, but I hope they do. At the current price point, it is hard for me to recommend the Vulcan 100 AIMO knowing there is the Corsair K70 MK.2. If this keyboard was slightly less expensive and allowed for on-board lighting/macro storage, it would be a great recommendation.

Legit Bottom Line: The Vulcan 100 AIMO looks great and performs well with its Titan mechanical switches, but falls short due to its value against the competition.