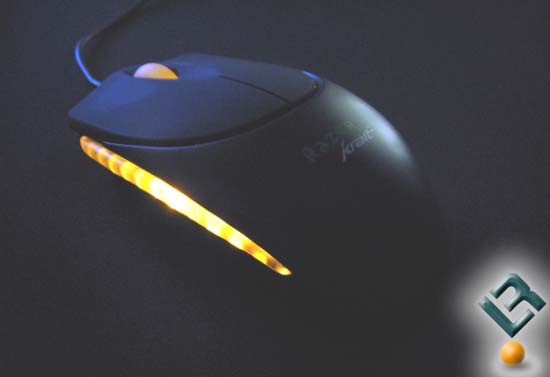 For the past couple weeks I have been using the Krait as my daily driver, so to speak, in place of my normal Microsoft optical mouse. Once I had become comfortable with the lower profile body and tweaked the settings to my liking, the mouse started to grow on me. I started out with some non-gaming work, because chances are you’re not gaming 100% of the time but doing other things as well. I quickly found that the precision of the Krait made things much more pleasant. At first, I thought that the ability to change the sensitivity on the fly would be a waste, I have always thought of it as a set and forget type setting. As I used it, I have grown to like the ability to change the setting on the fly; from turning it up so you only need an area the size of a postage stamp for a mouse pad or turning it down so you need your whole desktop to go from one side of the screen to the other.

It has proven to be quite handy in my Photoshop and CAD work. I set the ‘on the fly’ option to the scroll wheel, but in doing so I shot my self in the foot in a way. When you change the scroll wheel from the default ‘Universal Scrolling’ it looses its functions that went with that default setting – like being able to use the scroll wheel to click on a link in Firefox to open in a new tab, or the ‘hold and scroll’ for quick scanning of pages. This was is little annoying and I found myself going back and forth to switch the scroll wheel binding many times in the day. It would be nice to set the on the fly binding to a keyboard combo, this way you dont loose whatever the standard function is of the button you assign it to. Another feature I just fell in love with was the Teflon feet whick made it seem as if the Krait was on ice. From now on, any mouse I use will have to have Teflon feet! I was very happy with the improvement the Teflon gave over the standard plastic feet that are on the Microsoft mouse I used to use.

As I continued using the Krait and was gaining a better feel for it, I started using it in games. Since I lean more to the FPS then the MMOG/RTS type games, I cant say how this will help in those games, but Im still an old school 3 button mouse kinda guy. As I started up the games, the first thing I noticed was the ability to place shots easier and with less fighting the mouse to achieve my goal. With the on the fly sensitivity on and bound to the scroll wheel; adjusting in game did not affect my game key bindings or game play, except when I stood still to adjust it – can we say fixed target.

The Krait can be found at just below $30 at most major e-tailers, less if you search around. So, the Krait is very affordable and feature packed for the price; I feel it has a very high bang for buck value. In searching NewEgg to see what other mice were in the price rage of Krait and had the same features, there were none, the Krait was it. As you opened up the options, you got other Razer offerings such as the Diamondback and that will set you back ~$38 plus shipping. Unless you need umpteen buttons on your mouse the Krait should be on the short list for for your next mouse.

Bottom line: Razer has delivered a simple, yet very nice, and precise mouse with the Krait and priced it at under $30. For those looking for a good all-around mouse and dont need 7 buttons, I highly suggest you give the Krait a good hard look.