Reviewing the usability of a mouse is not a simple process and quite often is a completely objective process. What works for one user may not for another and the fact the mouse is so customizable its hard to set exactly how it would even be tested from one person to the next. The tests in this review will be conducted with the settings left at their defaults with the expectation that anyone who buys the Diamondback, would tweak it exactly to their specifications once they had used it under default settings to start, as it advises in the manual.

The test to compare whether less hand movement was required to move around in a game due to the Diamondbacks enhanced tracking ability. A simple 360 degree turn in a 3D game with the mouse will highlight how well the mouse tracks. As well the Diamondbacks change-on-fly can be tested and shown how it impacts game play. Again another advanced piece of testing equipment was created specifically for this test called the pull-a-mouse. It measures how much horizontal distance was required to turn 360 degrees in a game. The mouse was moved and here are the results: 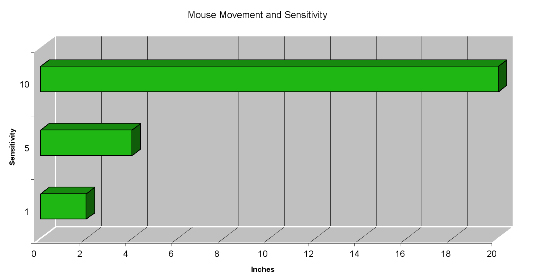 The Acid Green Razer Diamondback mouse was a pleasure to use in both normal and gaming duty on my computers. Its smooth movement and rapid tracking increased my response time in my games which in turn increased my enjoyment. In a lan party environment is turns heads and makes people wonder a little bit more if you are going to be stalking them later. The change on the fly feature is by far the best feature of the mouse, being able to change responsiveness to match game situation real time is a powerful tool which most mice cannot brag about.

At a price point of just under $60 it is very competitively priced against its competition. I would defiantly recommend giving this mouse a try in your gaming life.