VIA was at Quakecon 2003 showing off their newest products and some of their partners newest boards that just arrived from overseas. VIA had several Athlon64 platform motherboards on display on their show floor. This case with the blue window below houses a VIA reference motherboard with an Athlon64 754-pin processor running at 1.8 GHz and an NVIDIA 5900 Ultra graphics card. This was a very quick computer!

Behind their display, VIA showes us some new Athlon64 motherboards that just came in from Taiwan. Below is the new Gigabyte K8VNX Athlon64 motherboard. It does come with dual network ports and their GPS custom power system. Great looking layout, but nothing that really stands out! 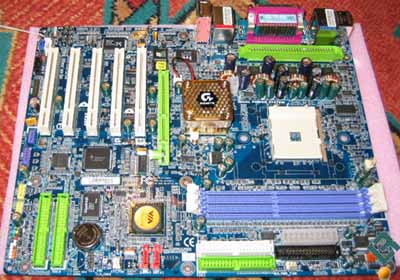 Below are some images of the MSI K8T Neo that was also shown to us by VIA. The MSI board uses the VIA 8237 south bridge for Serial ATA RAID 1/0, but also had a Promise SATA chipset that allowed for two more SATA channels. Check out the 6-channel audio with a SPDIF and composite audio output that is found on the back I/O plate….WOW! 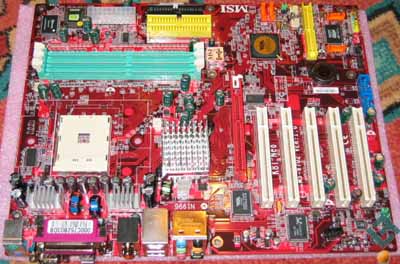 Let’s look at the rest