Using the Pulsar 590A with a Bluetooth-Enabled Computer

We wanted to use the Pulsar 590A with our PC to listen to MP3s and for internet chat so we tried to pair the headset with our existing Bluetooth PC Adapter with mixed results. The pairing with our Belkin F8T012 PC Adapter resulted in being able to hear music played using iTunes or Windows Media Player in “cell phone” quality sound. Sound basically bordered on being “mono” quality. This isn?t totally surprising considering the first time we tried this test with Motorola?s HT820 we had essentially the same experience.

For voice conversation over the Internet using Skype, the Plantronics Pulsar in conjunction with our Belkin PC Adapter performed flawlessly. After successfully pairing the headset with the computer, all computer sounds including the conversations with my Skype buddies came through loud and clear. I was able to walk away from my computer chatting with no problems at all. I found that I could get about 25-30 feet away before I started experiencing static dropouts. What was cool was this range wasn?t just “line-of-sight” distance. I was able to go down the hall, fold clothes, go to the restroom, etc., and still hold a conversation. 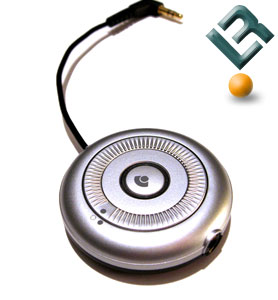 When I plugged the Pulsar?s Universal Adapter into the headset jack of the computer, we were again able to hear all of the computer?s sounds ? this time in full stereo! All MP3s, movies, games, or whatever you would listen to via a standard wired headset, we were experiencing wirelessly. The stereo sound using the Universal Adapter was incredibly good and superior to the Motorola HT820/DC800. Music came through brighter with the dynamic range of sound better than that of the Motorola and the fact that we didn?t have to search for an extra outlet to power Motorola?s adapter made it even more desirable. When directly comparing the sound that we get from the Plantronics Pulsar 590A with that of the Motorola HT820, the Pulsar 590A is the clear winner.