Overclocking can be done easily done via the pre-programmed percentages found in the ASUS P4P80SE BIOS.  Enthusiasts can of course manually set their settings, but when doing so they lose the voltage boost provided by the pre-pregrammed settings.  Our best “automatic” overclock using the Intel 770 processor was 20%, which resulted in 2.56GHz or a 430MHz increase in core frequency with the memory running at dual channel DDR400 and the FSB at 640MHz.  Our CPU-Z of this overclock has been verified and can be seen online here.

We tried overclocking the board manually and were able to raise the front side bus 5MHz higher than the 20% overclock we just tried before the system became totally unstable. This time we were able to reach 165MHz FSB for a core frequency of 2.64Ghz.  A 510MHz overclock is a healthy 24% boost in frequency over the rated 2.13GHz it should be running at.  Our CPU-Z of this overclock has been verified and can be seen online here.

Just before publishing this article I spoke with Franck Delattre, the webmaster of cpuid.com, and author of cpuz and clockgen.  After conversing about the board and BIOS limitations Franck asked us to try out a tool called EIST that could be used to adjust the Pentium M’s multiplier and core voltage (only down).  We also downloaded the correct ClockGen (CG-ICS952607) for the ASUS P4P800SE motherboard to allow us to adjust the front side bus (FSB) dynamically via the desktop.  All of these programs that Franck created work fine on our test bed and allowed us to do everything we wanted, but up the vCore of the processor. 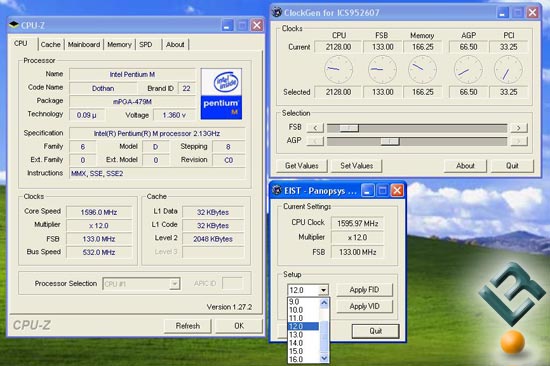 As you can see in the above image I was able to adjust the multiplier from 6-16 and could use ClockGen to boost the FSB levels.  We lowered the CPU Clock down to see 6 (the lowest possible setting)  and went to find the highest FSB we could use without voltage mods.  We were able to reach 173MHz FSB for a BUS Speed of 690MHz.  Our CPU-Z shot for this can be seen online.  Using this software we were not able to get much more head room out of our processor, but posibbly with a voltage mod for the vCore we can.  Overclockers have noticed a hurdle at the 170-175MHz range on i855GM boards and again it holds true on the i865PE/CT-479 platform.  Time will tell if ASUS can update the BIOS to improve performance/overclocking and Legit Reviews will continue to look into Pentium M overclocking. 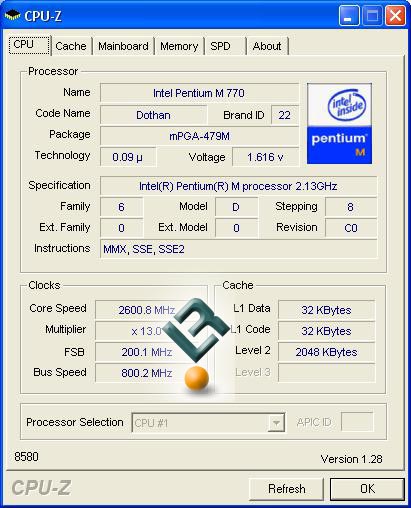 One of the main advantages of the Pentium M processor over competing processors are the low thermal properties produced.  In the case of the Pentium M being used in conjunction with the ASUS CT-479 adapter we believe that the Winbond W83627 Super I/O found on the ASUS P4P800SE can correctly read the voltages on the Pentium M processor.  If you recall the CPU or “Core” temperatures seen via monitoring software programs are not a measure of actual temperatures. The temperature is actually ?calculated? by the Super I/O chip that is associated with the thermal diode. There is a parameter for the calculation that is used and it comes from the I/O chip vender. Since the W83627 chip is also used on the DFI 855GME-MGF Pentium M board hopefully all of them detect the right voltages. 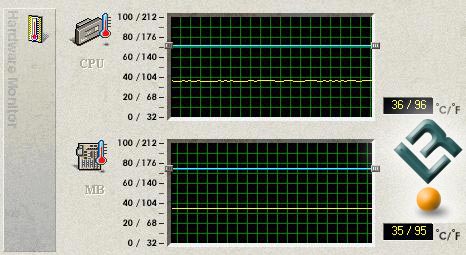 At idle our Intel Pentium M 770 processor is just a single degree Celcius above the motherboard temperature and that is using the thermal pad that comes with the kit!  When running at full load, temperatures were observed at 40C, just a 4C rise from the idle temperature.  This is not too bad when you think of the original Intel Prescott 3.2GHz we tested last year that ran at 51C with the factory HSF and 42C with water cooling from Corsair Memory.

UPDATE:  Using Corsair’s HydroCool 200ex we were able to run the Intel 770 at default clocks and voltages at 27C and a MB temp of 33C.  We used the standard Corsair HydroCool Block and a chipset cooler for the north bridge.  Pictures of this can be seen in this forum thread.