The ORICO iv300 iMatch Series Portable SSD features the latest revision of the JMicron JMS583 controller and was capable of reaching over 1 GB/s read speeds in our testing. It constantly finished in third of fourth place in the vast majority of benchmarks and is without a doubt one of the fastest NVMe-based external SSDs that you can currently buy!

The only caveat is that the ORICO iv300 runs hot when transferring large files. The aluminum body of the ORICO iv300 is pretty small and entirely enclosed. That means the heat builds up and the drive throttles down to under 40 MB/s speeds until the file transfer is over and the temperatures can recover. Our testing showed that you’ll need to be moving around 45-50 GB of files to create a situation where heat becomes an issue. If you move around a bunch of small files or don’t move them over all at once the ORICO iv300 500GB drive that we tested would not overheat. Some NVMe-based SSDs like the WD_Black P50 Game Drive have open slots on its enclosure to prevent overheating situations like this, so heat is a concern with all high-end portable SSDs that are capable of reaching over 1 GB/s speeds. 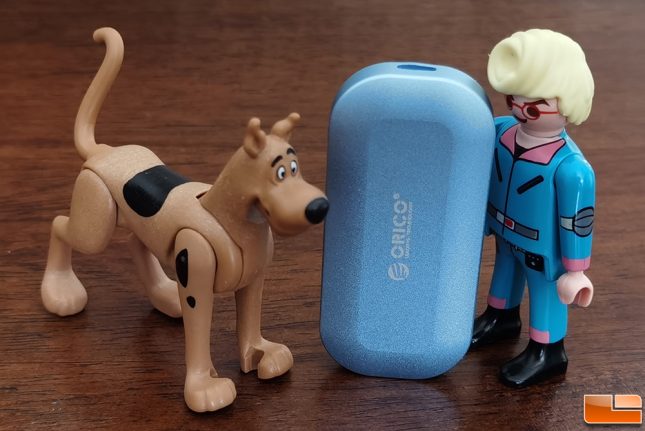 At the end of the day the ORICO iv300 is an impressive drive that delivers outstanding performance in a small form factor. If it didn’t overheat and throttle down with large file transfers it would have been able to give the big name drive makers a run for their money. The honest truth is that it runs hot and costs more than the household brand name rivals. It also does not offer AES 256-bit hardware encryption, which is a level of security offered by drives like the Samsung SSD T7 series that is priced $50 less. ORICO came close to delivering something really good with the iv300 iMatch series. If they can figure out a way to keep drive from overheating and lower the price a bit they would have a drive that we would easily recommend!

That said, the ORICO iv300 is a must buy over the ORICO GV100 as it uses a newer revision JMicron JMS583 controller. We’ve already talked about the importance of the JMS583 A2 controller in other articles and you’ll be better off down the road with it.

Legit Bottom Line: The ORICO iv300 does great when lightly used, but under heavy use it will throttle down and be slower than even a portable hard drive. It also just happens to be priced over its name brand competition and that is hard to look over.