Earlier this month, Intel announced the 11th Gen Intel Core S-Series ‘Rocket Lake’ desktop processors would be coming to market sometime in Q1 2021. AMD Ryzen 5000 processors available for purchase on November 5th, 2020 and have already claimed to be the new single-core and gaming performance winner. Intel has been pretty quiet since announcing Rocket Lake, but they released some additional details about the Rocket Lake architecture this morning. 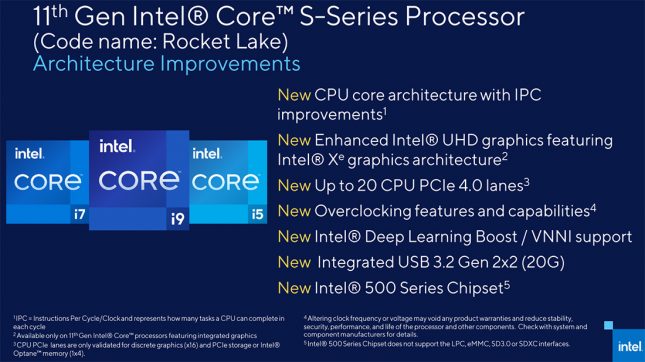 The upcoming Intel Rocket Lake-S processors are based on the Cypress Cove architecture, which is essentially Ice Lake with Intel Xe integrated graphics. Yes, that means 10nm ported back over to 14nm. This likely helped Intel get higher clock frequencies and we all know that most applications and games run better with higher frequency cores. Intel has really been driving home the message lately that frequency matters and that they will continue to push the limits there to get the best performance. 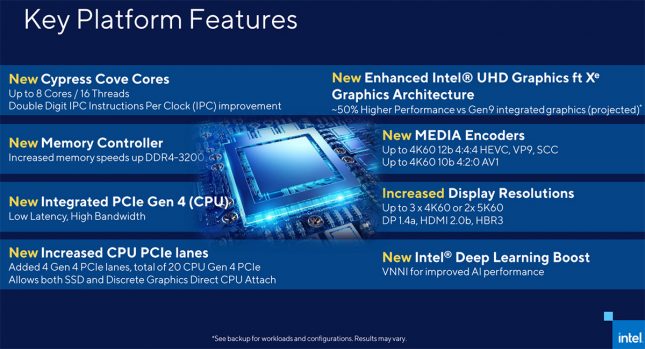 Another interesting bit of information in the slides that were released today is that Rocket Lake is only being shown as having 8-cores and 16-threads. The 10th Gen Intel Core i9-10900K had 10-cores and 20-threads, so it looks like some cores are being sacrificed. According to the Intel system configurations the 10-core Comet Lake-S and 8-core Rocket Lake-S processors both share 125W PL1 and 250W PL2 ratings! Intel did not disclose what clock speeds Rocket Lake is capable of reaching, but they did say that they are seeing double digit gains in IPC performance.

Intel has finally bumped up support for DDR4 memory speeds and now officially supports DDR4-3200 memory kits. It would have been nice to see Intel stretch this up to DDR4-3600, but it is better than DDR4-2933 on Comet Lake! That extra memory bandwidth will help improve performance, but Intel used 2933MHz DDR4 memory timings for the IPC performance results in the slide.

Intel again confirmed that up to 20 PCIe 4.0 lanes are supported by Rocket Lake processors. The slide notes that CPU PCIe lanes are only validated for discrete graphics (x16) and PCIe storage (x4). This means both NVMe SSDs and discrete graphics card directly connect to the CPU. Intel mentioned that Intel 500 series chipsets will come out with Rocket Lake, but did not disclose if any PCIe 4.0 lanes will be supported on the chipset. The news that USB 3.2 Gen 2×2 (20Gbps) support is integrated into the processor is huge news as that doubles the performance over USB 3.2 Gen 2 (10Gbps) solutions.

Other new features on Rocket Lake will be additional media encoder support for up to 4K60 12b 4:4:4 HEVC, VP9 and SCC as well as up to 4K60 10-bit 4:2:0 VP9. Intel has also increased display resolution support to include three 4K60p or two 5K60p displays. Intel highlighted that Intel UHD Graphics featuring Xe graphics architecture gets around 50% higher performance vs Gen9 integrated graphics.

Rocket Lake has AVX-512 vector acceleration and that allows it tap into Intel’s library of Deep Learning Boost technologies for AI and ML acceleration. Intel confirmed this morning that Rocket Lake will get Vector Neural Network Instructions (VNNI) on this desktop platform. 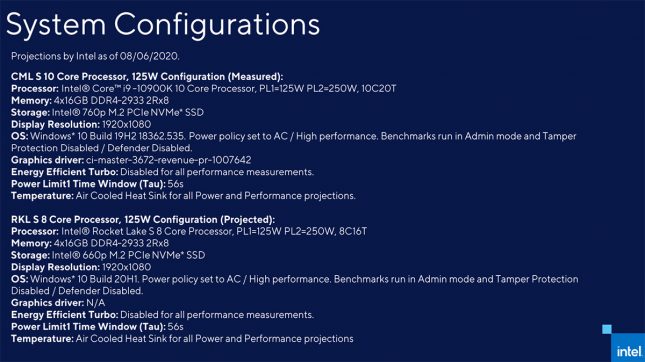 We have a feeling that Intel will release more teasers about Rocket Lake in the near future. AMD was able to get Ryzen 5000 processors out in time for the holiday shopping season and Intel has until April of 2021 to release these processors! Intel fans could have up a six month wait for Rocket Lake to arrive and that is an eternity for enthusiasts.