Today, AMD hosted an online event that introduced the highly anticipated AMD Ryzen 5000 Series desktop processor series powered by the new Zen 3 core architecture. Zen 3 delivers a massive 19% generational improvement in Instructions Per Cycle (IPC) compared to the current generation of Zen 2-based Ryzen 3000 series desktop processors. Many improvements to the core were made, but it now features a unified 8-core complex with direct access to the L3 cache. 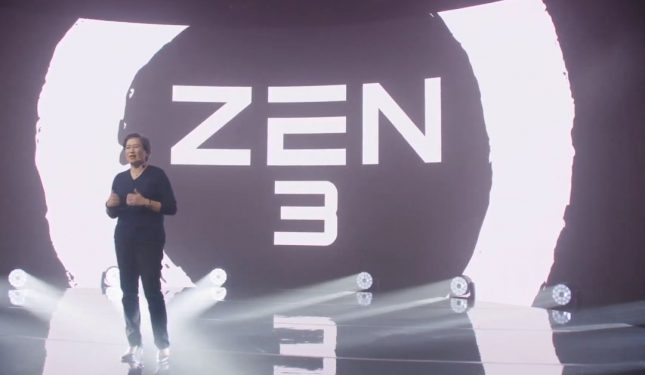 AMD claims that they will have the highest single-thread performance and most multi-core performance of any desktop gaming processor! These claims are made using the AMD Ryzen 9 5950X 16-core, 32-thread processor that runs $799. It features a 3.4 GHz base clock with an impressive 4.9 GHz boost clock. The current AMD Ryzen 9 3950X processor has a 3.5 GHz base clock and a 4.7 GHz boost clock. This is a nice increase to the boost clock considering that AMD is still using the 7nm manufacturing process.

Four AMD Ryzen 5000 Series desktop processors were announced today and all will be available on November 5th, 2020.

AMD appears to have increased pricing by $50 for each part number over the original launch prices the AMD Ryzen 4000 desktop processors. With AMD now able to claim that they have ‘the world’s fastest gaming processor,’ it was only a matter of time until price creep started to happen.

Robert Hallock, AMD Director of Technical Marketing, had the privilege of letting the world know that AMD had officially overtaken Intel for gaming performance. He showed off a 1080P gaming slide that showed the AMD Ryzen 9 5900X was faster than the Intel Core i9-10900K in nine out of ten game titles. AMD touted a 21% lead in League of Legends and a 19% lead in CS:GO, which are substantial. The only test they were behind in was Battlefield V. 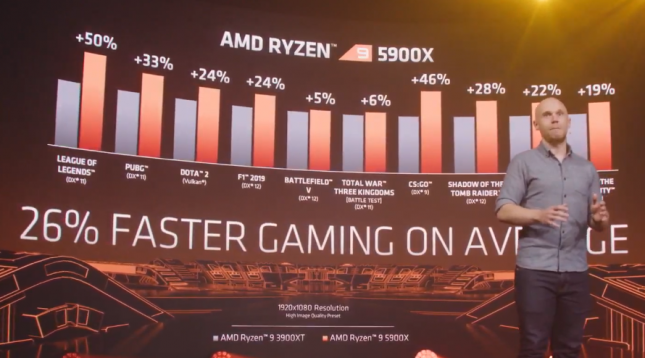 The AMD Ryzen 9 5900X delivers 26% faster 1080P gaming performance on average over the AMD Ryzen 9 3900XT processor that just launched this summer. Zen 3 gives AMD a huge uplift in gaming performance and that in turn will give AMD Ryzen 3000 owners the itch to upgrade. The good news on the upgrade front is that AMD Ryzen 5000 series processors will drip in many existing motherboards after a UEFI/BIOS firmware update!

It will be interesting to see how things look when independent reviewers like us get our hands on the chips to try out. Intel’s 11th generation Rocket Lake-S desktop processor family isn’t due out until Q1 2021, so that gives AMD plenty of time to take the gaming performance crown and be the top dog.