Offering a really consistent rubber-like finish that is soft to the touch, with a very smooth feeling when running your fingers across it, the Mionix Castor Ice Cream Edition evokes a premium feel that few other mice can compete with. The light blue soft touch coating of the Castor Ice Cream doesn’t pick up fingerprints during use and does a great job of rejecting dirt and dust, an issue the original Castor struggled with just a bit. Rather than an RGB logo, the Castor features a two-tone ice cream themed color scheme, with the logo a darker blue than the rest of the mouse. 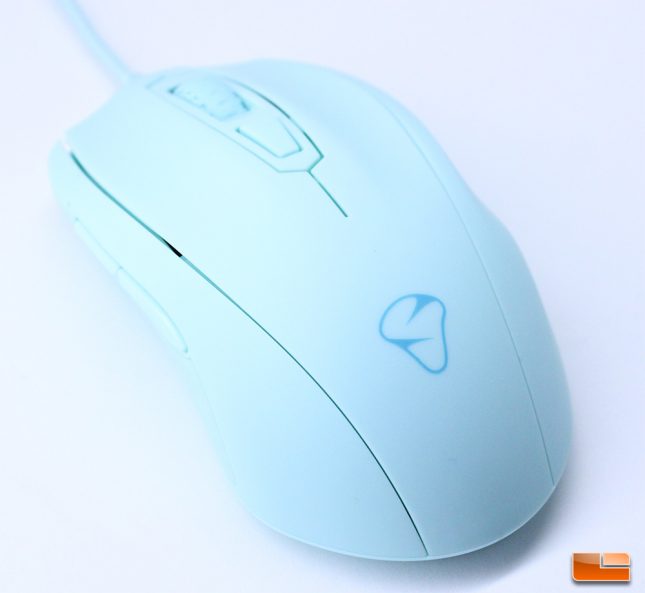 The combination of materials that Mionix uses along with the ergonomic design of the Castor has always kept it rated in my top mouse category in terms of feels, but the click latency issues of the original were a let down that kept me from putting the mouse in my top category. Now that Mionix addressed the click latency issue, the Castor has become more viable for competitive gaming. Most people should be comfortable holding the Castor, as it measures in at 122.46 mm long, making it just shy of five inches from front to back. My hand measures 7 1/2″ inches from the base of my palm to the tip of my middle finger and palm grip on the Castor felt great, with the tips of my fingers resting right towards the front of the buttons, without going over the front, but users with larger hands may run into issues. 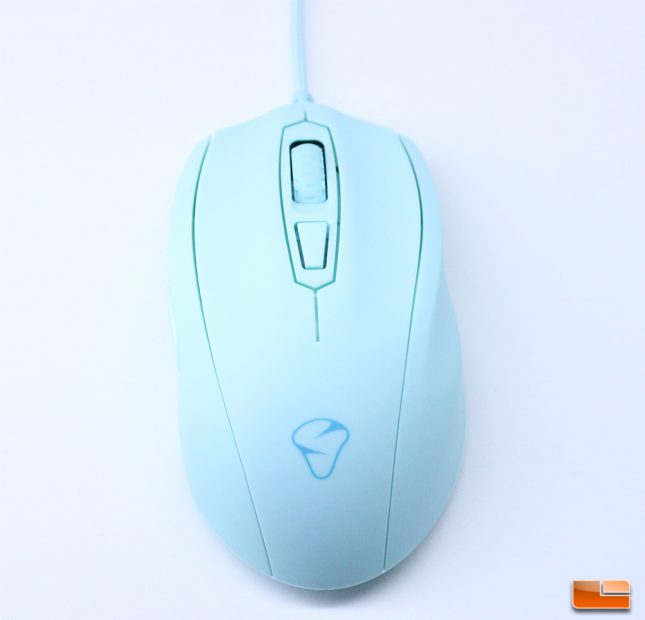 The Mionix Castor Ice Cream Edition has a pretty prominent mid section that tapers down in the rear palm area and towards the bottom while flowing outward as it moves up the mouse towards the front, which gives it a very substantial area to grip while allowing the fingers plenty of area to rest. The grip length, or side-to-side measurement of the Castor, is about 5 1/2″, which gives an ample area to hold the mouse without making too wide that it becomes less nimble. 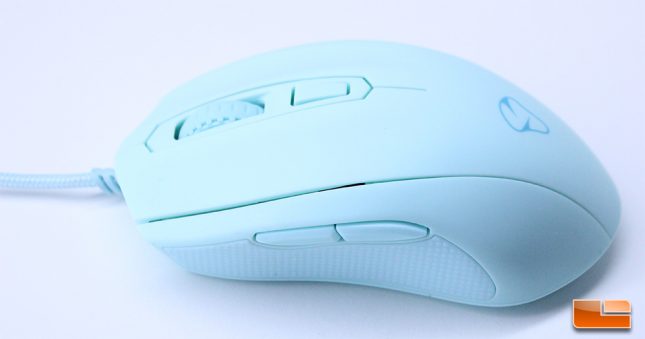 With a somewhat compact design with a focus on ergonomics for right handed users, the Mionix Castor Ice Cream Edition sports six buttons that are in familiar, typical locations. The side buttons of the Mionix Castor Ice Cream Edition have excellent placement that puts them right under my thumb, protruding enough that they can be pressed easily, while providing very crisp, consistent clicks. The side grip material of the Castor has a smooth feeling paired with excellent grip, without being so aggressive that it causes discomfort over the long term. 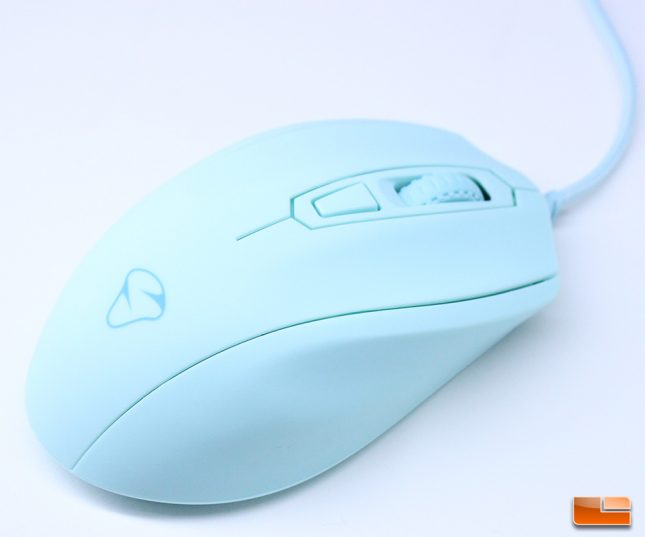 With a left side that slightly indents to allow for proper thumb placement within a comfortably textured side grip area and right side with unique ridges to rest your fingers on or hold when in claw or fingertip grip, the Mionix Castor lends itself pretty well to comfort along with allowing for a variety of grip styles, provided your hands aren’t too large, in which case you may be limited to fingertip and claw grip with the Castor. The curved ridges do kind of force the position of your fingers more than a flat side would since your fingers will position into the grooves, but I found the Castor to be extremely comfortable.

The main buttons of the Castor Ice Cream Edition have a very crisp, refreshing click that is consistent across both buttons. The single-piece top shell design of the Castor prohibits the individual main buttons that have become common on so many gaming mice, but these main buttons feel great and have an excellent tactile response, with no issues of inconsistency or the plastics rubbing together during simultaneous button presses. The scroll wheel has a crisp click, while the scroll action is tactile, but just slightly muddier than I would like. Mionix has placed the DPI change button of the Castor in a clever location and it is easy to press, while providing enough resistance that I wasn’t constantly changing my DPI on accident while playing games. 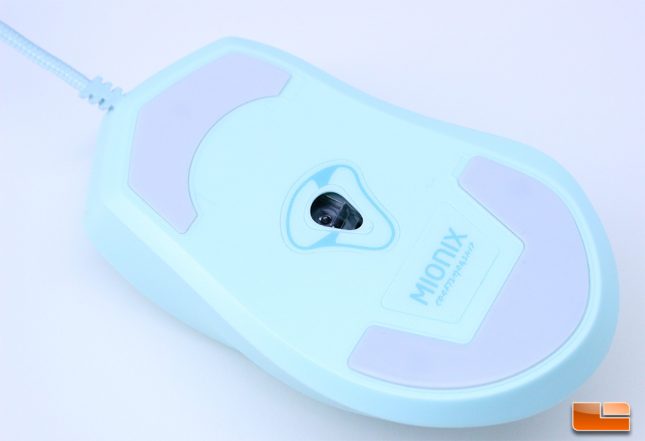 The Mionix Castor comes with a six foot long braided cable that matches the color of the mouse, all the way down to the USB connector, which has a Mionix logo, though no gold plated connector. I normally don’t like braided cables on mice, as they tend to fray and snag, but Mionix is using a really thin, lightweight cable that has a nice coating that doesn’t grab or snag on my desk so much. There is a rubber reinforcement for the cable where it enters the mouse to prevent long term wear. With a mouse bungee installed, the Mionix Castor Ice Cream Edition cable is really easy to manage, which allowed the mouse to be used in a really smooth fashion. 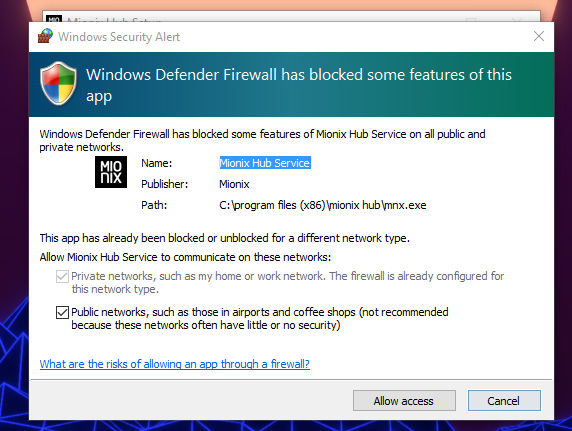 There was a bit of confusion on my part during the initial installation, because Mionix lists two versions of firmware and software for the Castor on their site. This is because Mionix hasn’t done a good job of separating the older model Castor from the new one in the download section and they are listed together, so it is unclear which version of software or firmware a user should get for their particular Castor.

The Mionix Hub software worked well, with the buttons section allowing each of the buttons on the Castor to be reassigned to different functions, including recorded macros. The performance section of the Mionix Hub was laid out in an easy to use fashion and allowed for multiple DPI levels to be set for toggling, along with adjusting lift off distance and angle snapping. The default lift off distance of the Mionix Castor was perfect for me, but it is nice to see them include the ability to adjust this setting with Mionix Hub. The Mionix Hub quantified gaming section was an interesting area, as it provided information that a lot of users may find interesting, such as the current speed the mouse is traveling at.

Mionix Castor Ice Cream In Use

Playing games like PUBG and Battlefield 4 with the Mionix Castor was an enjoyable experience, as the mouse tracked well while providing a very comfortable surface to rest my hand on. I never noticed any issues with button consistency and felt very confident while using the Castor Ice Cream Edition, as it had a reassuring feel paired with responsive performance. I didn’t notice any issues with tracking and while the Pixart 3310 may be aging, at the 1200 DPI that I play games at, it seemed to be as accurate as any of the mice I’ve tested over the past year. Click latency was fine on the Castor Ice Cream, with my average on The Human Benchmark coming in at 189 MS, right on par with the fastest mice I’ve tested.

With excellent ergonomics, an amazing feel and solid build quality that all lend themselves to a solid day to day experience, along with pulling off duty as a solid competitive gaming mouse, the Mionix Castor Ice Cream truly impressed me. Let’s wrap up this review and see how the Castor stacks up with some of my current top mice on the next page.