The Micron 5100 MAX series of data center drives came out in 2017 and was designed specifically for write-intensive applications. This series features built-in AES-256 bit encryption, TCG enterprise protection, and FIPS 140-2 validation. Back in 2017 when the Micron 5100 MAX was released a 1.92TB model of one of these drives would run you around $1,100 or around $0.59 per GB. A price that certainly no consumer would ever want to pay for an SSD, but you can now get them for a fraction of that price.

Our friends over at MyDigitalDiscount recently purchased a large lot of brand new surplus Micron 5100 MAX 1.92TB drives. They have thousands of these drives and have them listed up on Amazon for $289.46 shipped. They are also running a promotion right now that brings the price down to $219.99 shipped by using promo code 219192MD. That brings the price down to just over $0.11 per GB!

This drive is clearly aimed at use in the data center, but now that you can pick one of these drives up for around $220 it actually makes it less expensive than most consumer drives that are on the market today. Popular drives like the Samsung SSD 860 QVO 2TB (QLC NAND) is $229.99 and the Samsung SSD 860 EVO 2TB (TLC NAND) is priced at $279.99. So, you can pick up a leftover Micron 5100 MAX for less than the price of a new consumer drive.

Pricing is just part of the picture though and it now what makes the Micron 5100 MAX 1.92TB drive really interested. What makes this drive really intriguing is the face that it is capable of 5 DWPD, which means this 384GB 32-layer eTLC NAND Flash powered SSD can handle five complete drive writes per day. For the 1.92 TB capacity model that means you are looking at an endurance rating of 17,600 TBW over the course of the drives five year warranty. We deal mainly with consumer drives here on Legit Reviews, so that is an mind blowing number to see. The Samsung 860 QVO has an endurance rating of 720 TBW for the 2TB model. So, we are talking about an endurance rating that is nearly 25 times longer than an entry-level consumer SSD. It even comes with full power loss protection to ensure data integrity in the event of a power outage during usage.

So, this drive comes with features that you won’t find on consumer drives at a price point that is affordable. 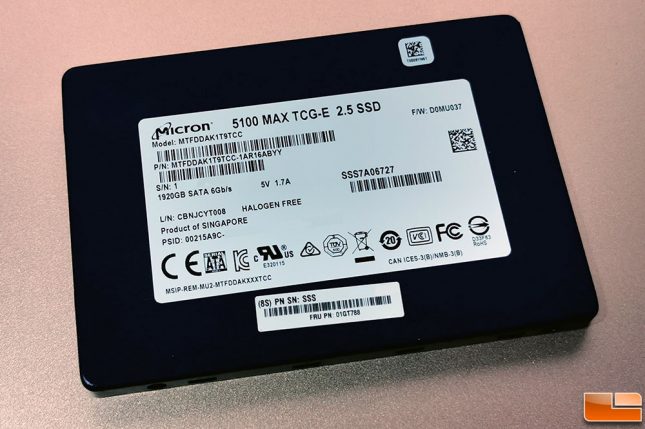 We’ve never had a chance to try out the Micron 5100 MAX and most of the reviews on the drive are from 2017 and written with enterprise customers in mind. We got our hands on the Micron 5100 MAX 1.92TB drive and gave it a test drive on our AMD X570 test platform that is powered by the AMD Ryzen 5 3600X processor.