Available with the new Logitech Romer-G Linear switches and featuring a smooth, minimalist design that will fit in pretty much anywhere, the Logitech G513 is a good looking, well-built RGB keyboard. The feel and fit of the Logitech G513 are decent and the included wrist-rest is well made, in addition to being one of the most comfortable I’ve ever used. The carbon colored aluminum top plate of the Logitech G513 looks absolutely amazing, with a consistent grain across the board that does a great job of repelling dust and fingerprints.

Logitech has done the right thing by expanding their Romer-G lineup to include a linear switch, as the new Romer-G Linear is an absolute delight to use, with smooth, fast actuation that lends very well to fast paced gaming. The Romer-G Tactile switch feels similar to how it did on the G413, offering a slight bit of resistance at the tactile bump, but being smooth and easy to actuate. If I have to make a choice between the two switches, I am going with the Romer-G Linear, it’s just so damn smooth. 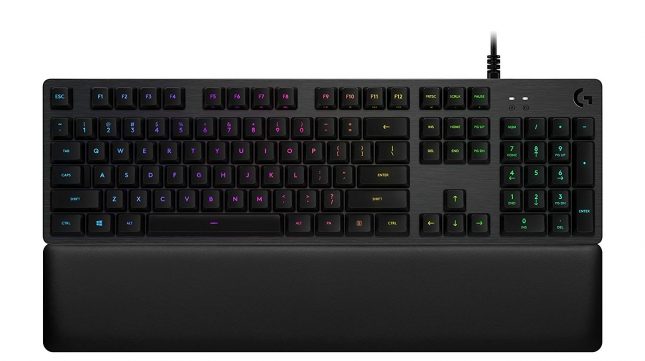 While the Logitech G513 excels in many areas and is an excellent keyboard to use on a day to day basis, the minimalist design means that there are several features you may expect out of a $130 keyboard that are simply not available. Independent macro keys and media controls not being available will be a turn off to gamers who expect those features. Features available on other Logitech keyboards like a volume wheel, game mode toggle button and lighting button aren’t available on the Logitech G513, meaning the keyboard is a lot more reliant on using the FN key in combination with F-keys to activate certain modes. I am a big fan of the pronged USB cable that Logitech includes with their mice and other peripherals, so it would have been nice to see Logitech implement that here and give the G513 a removable cable. While having a good looking font, the laser ablated ABS key caps included with the Logitech G513 are cheap and just don’t feel like they belong on a $129.99 gaming keyboard. Since the Romer-G switch is unique to Logitech, key cap selection is currently limited to what Logitech provides with their keyboards and this is unfortunate.

The ‘ping’ sound issue of the Romer-G switches paired with the less-than-stellar stabilizers on the shift keys of the G513 were both let downs during an otherwise enjoyable experience. Neither of these issues were enough to keep me from using the G513 and having an enjoyable experience, but they can certainly be deal breakers to discerning users.

The Logitech G513 is a damn sexy keyboard that has good build quality and for now, it’s the only keyboard out there with the Romer-G Linear switch. The Logitech G513 is currently available for $129.99 on Amazon, which seems like a better value than the Corsair K70 RGB RAPIDFIRE that is available for $169.99 shipped. The Logitech G513 compares very well with the Corsair K70 RGB RAPIDFIRE, as both keyboards offer RGB lighting, USB pass-thru, switches with fast actuation and aluminum top plates with solid build quality. The Logitech G513 does offer a superior wrist-rest to the K70 RGB and the Logitech Gaming Software is more user friendly and easy to use than Corsair iCUE, but both keyboards are solid offerings that compare very evenly to each other. The Razer BlackWidow Chroma V2 is available for $134.84 at Amazon and also offers a wrist rest and RGB lighting, but omits USB pass thru while adding macro keys, something that the Corsair and Logitech offerings do not. I haven’t had much experience with Razer BlackWidow Chroma V2 beyond some demo testing, but the keyboard does have a loyal following and is very popular with PC gamers.

Logitech has done a good job of producing a quality RGB mechanical keyboard and introducing the Romer-G Linear switch with the G513, but it isn’t a drastic upgrade or change from the G413, nor is it better than the Corsair K70 RGB RAPIDFIRE by any discernible margin for me to recommend it over the Corsair offering when the prices are the same, get whichever one has the features and style that fit your system best.

Legit Bottom Line: If you are a PC gamer who favors minimalist design and want an amazing looking keyboard that is built to last, the Logitech G513 is easy to recommend. The new Romer-G Linear is smoother than smooth and has become my favorite linear switch.