The Logitech G513 adds RGB support and a few other features, but otherwise remains identical to the G413 that we reviewed last year, though some slight modifications have been made to the frame and key caps. Logitech keeps the frame of the G513 tight, with a rigid top plate manufactured from 5052 aluminum alloy, which contains affecting amounts of magnesium and chromium, giving the metal exceptional protection from corrosion and rust. There aren’t any media keys, macro keys or volume controls present on the G513, something that threw me off when coming over from other Logitech G series keyboards, which tend to offer these types of controls. The front to rear sweep of the G513 is very slight and overall the keyboard is pretty flat, thought there is a bit of contouring thanks to the key cap design. 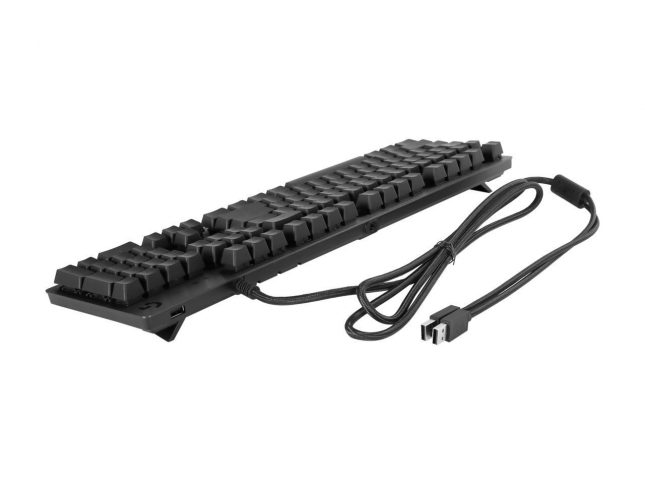 The G513 features a minimal amount of branding, with a chrome Logitech G emblem on the upper right side of he top plate. Unlike the Logitech G810 and G Pro, the Logitech G logo on the G513 does not feature RGB illumination, but given the aesthetic of the keyboard and minimalist design, I think it probably looks better without a diffused plastic logo present. 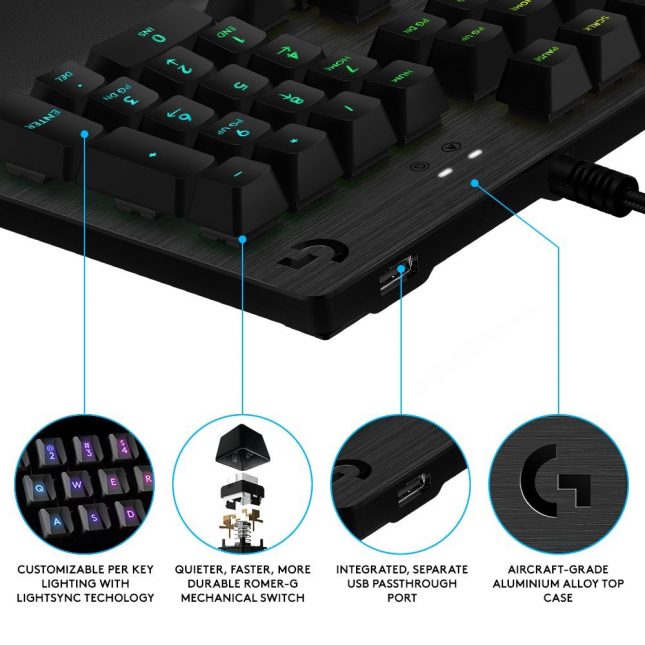 A thick, but flexible and easy to route cable comes out of the top right of the Logitech G513, which may conflict with optimal cable management in certain scenarios, depending on how your cable is routed. The USB 2.0 cable on the G513 has a pretty ugly reinforced area that takes away from the aesthetic and I would like to see a removable cable used, as Logitech did on their G Pro keyboard, as this will give users flexibility and allow them to replace a damaged cable down the road. Those of you who also own cats or other destructive animals will certainly understand the value of a replaceable keyboard or mouse cable, but the USB cable on the Logitech G513 is well-made and has a decent thickness to it, which alleviates some of my worry.

The stock key caps on the Logitech G513 look decent and they feel good to type on, but they are laser ablated ABS caps that I can guarantee will develop a lot of shine over time. The key font on the Logitech G513 is pretty sedate for a gaming keyboard and could stand to be a bit larger on keys like SHIFT and ENTER, though this certainly boils down to personal preference.

The Romer-G switch features a box-stem and the key cap has four plastic tabs that insert into the top of the stem, giving the Romer-G key caps a very stable feeling when compared to a Cherry MX, with a lot less rocking and key wobble present. Unfortunately, this stem design is proprietary to Romer-G switches and aftermarket key caps aren’t available.

Logitech is using Cherry stabilizers for their key caps, making them easy to remove for surface cleaning.

The pairing of the RGB lighting effects provided through Logitech Gaming Software along with the matte carbon back plate looks very clean and consistent, with no light bleed from switch to switch, which can cause inconsistent lighting. 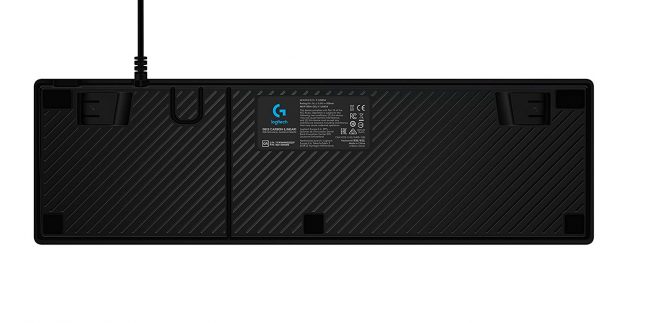 The plastic underside of the Logitech G513 has a slanted textured bottom with some unique cable channels, which are for headsets and mice to be routed. I found these routing channels were too small to work with the cables on many of the mice and headsets I own, even the cable shipped with Logitech’s own G Pro ended up being a pretty tight fit. Still, it was nice to see Logitech include this feature on the G513, as it can certainly help users clean up their aesthetic.

Typing – Typing on the Logitech G513 was a decent experience, with the tactile switch being my preferred switch for fast-paced typing scenarios, though I was able to easily type my typical 90 WPM average on both the G513 Linear and G513 Tactile variants. Coming over from the Logitech G Pro meant that the Romer-G Tactile switch on the G513 felt very familiar to me, but the frame height and key cap difference between the G Pro and G513 did lead to a noticeable difference in feeling between the keyboards. The G513 has a really low profile, but the switches sit on the top plate rather than being inset in a frame, so the caps actually have quite a bit of rise from the desk. The stabilizers on the shift keys had an almost mushy feeling to them compared to the rest of the board, something I noticed right off of the bat. I took the keys off and noticed nothing out of sorts, I just think Logitech should have used a stabilizer that is more consistent with the rest of the board. Other than the shift keys, the keys on both the G513 Linear and Tactile variants felt consistent during typing and the shift key issue was something that didn’t affect me in a noticeable way during use, but it was a slight bit of an annoyance at first.

Gaming –  The G513 Linear is an absolute joy to use in gaming, as the Romer-G Linear switch offers smooth, fast actuation without being too heavy. With anti-ghosting technology, the G513 can handle up to 26-Keys being pressed at the same time, sufficient for any gamer. The smaller frame of the G513 also means that it takes up minimal real estate compared to a lot of full sized units, giving me more room for my mouse. The G513 Tactile also provided a solid gaming experience, though I prefer the linear variant after testing both for the past few weeks. Logitech keyboards are optimized for low latency input and while I can’t say that I can notice these optimizations, I can say that my experience with the Logitech G series keyboards has always been solid in gaming scenarios and the G513 is no exception to this, especially since I don’t tend to use dedicated macro keys in games. The G513 does allow for the F-keys to be programmed to macros on a per-profile basis, so fans of macros aren’t completely left out.

General Notes – Both variants of the Logitech G513, with both the Romer-G Linear and Tactile, make a ‘ping’ sound when typing in a rapid manner. This sound is likely due to the aluminum top frame resonating with the spring inside of the switch. This is actually something I’ve noticed with the various Romer-G based keyboards I’ve tested, but it is very prominent on the G513. This ‘ping’ sound may not be noticeable to you, but if you are sensitive, it could bother you. I especially noticed it when doing sound recordings, as the sound resonates through my desk quite a bit compared to the sound produced by other keyboards. The Romer-G switch is supposed to be quiet and it is for the most part, but the ping sound produced by the G513 is definitely noticeable and something that can affect recordings and streaming, depending on how sensitive your mic is to vibrations.