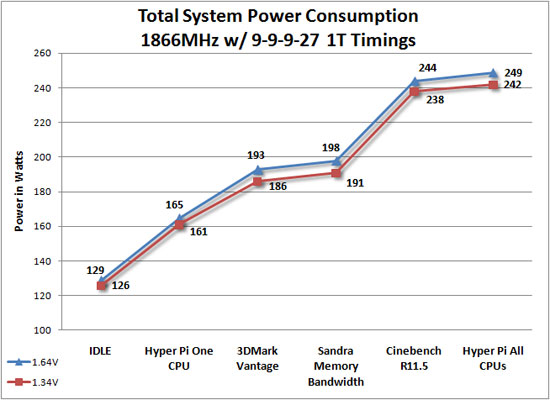 The first test we ran was at 1866MHz and we wanted to see the difference when running the kit at the standard 1.65V and then again at the Kingston HyperX LoVo rating, which is just 1.35V. We then did a series of benchmarks and recorded the peak power consumption of the system during that said benchmark using a Kill-A-Watt power consumption meter. At idle there was just a three Watt difference, but during various benchmarks when the memory kit was active we saw a larger performance gap. In fact we saw up to a seven Watt difference.  The Kingston HyperX LoVo memory kit was able to reduce the overall system power consumption by 3-7 Watts, which isn’t bad and the memory modules did feel cooler to the touch during heavy use. 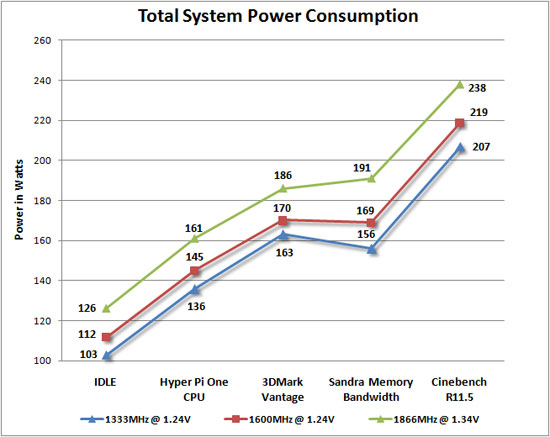 The nice thing about using the Intel X58 Express chipset for testing is that in order to test the testing is that the base clock and multiplier of the processor doesn’t change.  The only thing that changes is the memory divider. We recorded the the peak power consumption during all of our testing and when we went back and looked at it we noticed that as the memory clock frequency is increased the power consumption of the system went up rather significantly. This is something of interest as moving from 1333MHz to 1600MHz the only setting in the BIOS that was changed was the memory divider or strap as some people call it. Even though the memory vDIMM was manually set to 1.24V in the BIOS the system consumed 9 Watts more power at idle at 1600MHz than 1333MHz.  This was unexpected to say the least. Our benchmark results showed that you only get margainal performance increases as you increase the memory frequency when the timings remain the same, so if you are going for lower power consumption a lower clock frequency is also needed!