Have you ever run out of memory on your camera, smartphone or tablet at a critical moment or had to delete something you didn’t want to in order to free up space? Running our of storage space is pretty common these days and with most cameras being able to capture full 1080P HD or video or possibly 4k UHD video it is becoming obvious that our need for larger Flash memory cards is only going to continue growing. Kingston Digital is a trusted name in the memory card business and just last month they announced that they were doubling the capacities on both their Class 10 UHS-I microSD and Class 10 UHS-I SDHC/SDXC cards. This means you can get a Kingston microSD card in capacities of up to 128GB and an SDXC card with  a capacity of up to 256GB! 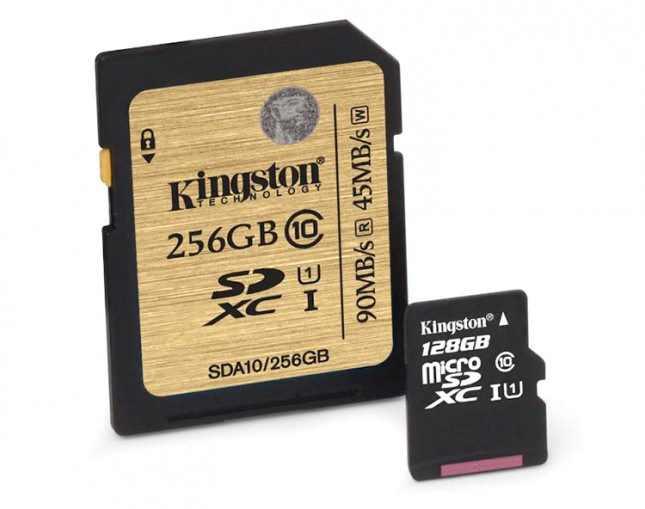 Kingston Class 10 UHS-I microSD cards are available in 16GB, 32GB, 64GB and 128GB capacities and have a 10MB/s minimum data transfer rate. The Kingston Class 10 UHS-I SDHC/SDXC cards are available in 16GB, 32GB, 64GB, 128GB and 256GB capacities and are rated at up to 90MB/s read and 45MB/s write thanks to the Ultra High-Speed bus I (UHS-I) interface. Not all Class 10 memory cards are created equal though, so you really need to make sure you know what you are buying. For example GoPro cameras are really popular right now and the manufacturer recommends using a memory card that is rated around 45MB/s when it comes to write speed. The Kingston Class 10 UHS-I SDHC/SDXC line is rated at 45MB/s write speeds and was designed for HD video, so it should work find.  The good news is that the GoPro Hero 4 Black tops out at around 60Mb/s (7.5MB/s) and the GoPro Hero 4 Silver hits just 45Mb/s (5.625MB/s), which is well below the 45MB/s write speed rating that Kingston gives these cards. Kingston does not mention specific speeds for the Class 10 UHS-I microSD cards, but it should be at least 10MB/s write as that is the minimum speed for a Class 10 card.

These new high capacity cards won’t be breaking any speed records, but they are meant to be mainstream memory card solutions for consumers that are looking for large capacity cards from a reliable manufacture. Kingston has been selling memory cards around the world for over a decade and has become one of the most reputable brands on the market and all of their memory cards are backed by a limited lifetime warranty.

We got our hands on the Kingston 128GB Class 10 UHS-I microSD that is sold under part number SDCX10/128GB for $124.97 shipped and the Kingston 256GB Class 10 UHS-I SDXC that is sold under part number SDA10/256GB for $199.80 shipped. The SecureDigital (SD) memory card standard  has been around since 1999, so chances are you are familiar with one is and have more than likely used one over the past 15 years. The MicroSD card was announced in 2005 and is basically a small form factor extension to the traditional SD card. Since the technology isn’t really new we’ll skip the fluff, take a quick look at the new Kingston cards and get straight to testing. 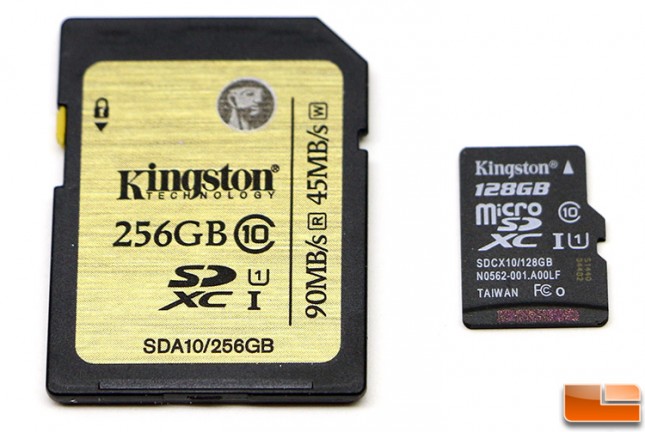 Both cards have black plastic casings that have been sonic welded together. The SDXC card has a sticker on the front that lists the cards general specifications and the model number. The MicroSD card is much smaller, so Kingston opted to silk screen all the information on the front of that card. We discovered that both cards are formatted using the exFAT file system out of the box.

Let’s take a look at our test system and get right to performance testing!